How do we, as coaches, work on our “game” to improve as a game coach? The easy answer is to coach more games. The second answer is to run more practices where players practice like they are in a game.

The problem is most coaches don’t coach in enough games to really improve. There are schedule limitations, and other restrictions that impact the number of games you get to coach. Many of you are assistant coaches as well, who may not get any game coaching experience until you become a head coach.

Just like anything, if you want to get better at something, you have to practice, and that includes coaching on the sideline. If you practice with an intent to improve then you will be on the right path to becoming a better game coach. Think about how many repetitions it takes to become a better shooter. Becoming a better game coach involves a similar high number of repetitions. A coach who coaches in, say, a 30-game season needs years of accumulated experience to hone their craft.

My solution was to coach as many teams as possible. Sometimes I would coach four teams in a calendar year. For a few years, I coached six teams (head coach varsity girls, JV boys, club boys and girls, a summer development program, and an assistant coach with a university basketball program). The way the seasons aligned, our lack of rules (there are no NCAA-like restrictions in Canada on me working with a college and a high school at the same time), and a lack of qualified interested coaches afforded me this opportunity.

This solution gave me tons of in-game coaching experiences prior to me becoming a collegiate head coach. This solution also isn’t realistic for most coaches. The solution is hard because there are not enough games in a season to speed up your in game coaching development.

A Practical Solution to Help you Get More Game Coaching Experience

You can accumulate more experience coaching the game by coaching your practices like games.

Practicing the way the game is played is actually harder than coaching a game. You are focused on offense and defense every practice, whereas in games you are more focused on your team. In practice you are observing and deciding when to intervene or not based on the execution of technique and tactics that you have coached. Yes, this same process can happen in a drill. The difference is, just like for players, you want the techniques and tactics you develop to transfer to the game.

Simulating the game as much as possible in practice transfers more to in-game coaching than practicing in a completely different context than the way the game is played. Drill based scripting and perfectly organized practices are not game-like. This results in you developing less observational analysis skills that apply to the game. The good thing is that you can improve as a coach by becoming a more effective observer.

Example of How to Practice a Game Situation

The Value of Observational Analysis

To improve as a game coach you must improve your ability to observe and analyze the game. Observational analysis is the coach’s active examination of a player or team’s performance to determine when and what to coach using interventions.

It’s a critical skill that can be applied in practice and games to identify performance outliers and to reveal issues such as player or team behaviors. Successful observational analysis requires high-level perception, critical thinking, and investigation. This enables them to identify things that require coaching interventions. Coaches need to observe thoroughly, and very closely to achieving a successful outcome.

A simple and practical way to improve your observational analysis is to simulate the game more in practice. Another one is to coach from the sidelines like you would in a game. Stand in your bench area and direct practice. Since this is where you coach from in a game, practicing making coaching interventions and observations from this location leads to improved game coaching analysis. The players, in turn, learn to what is necessary to improve within a game context.

The Parallels with Player Development

To improve as a player, it is easier to understand what is needed to improve. Working on your game means getting in the gym and working on things that you, or a coach, has prescribed for you to improve.

As a coach, how do you do that? You often don’t have someone telling you what to work on. In my experience many coaches don’t use self reflection or seek peer feedback enough. This is often because the game provides a very visible evaluation of your success: If you win, you coached a good game; if you lost, you coached a bad game. It is very finite.

We know however that the cause of a win or loss cannot, nor should be, attributed solely to your coaching. There are many variables that go into winning and losing. For a coach, the focus should be on the controllable ones. Practice and mental preparation of your players is a big one. Another is your in game coaching decisions.

I had a chance to ask an NBA coach what he did to prepare himself for the next game. This coach told me that he watched the previous game with an assistant coach and they would analyze each decision the coach made in the game. This was both self-reflective and analytical because of the presence of the assistant coach. This wasn’t a session designed to analyze the team’s performance. It was designed to analyze the coach’s decisions. 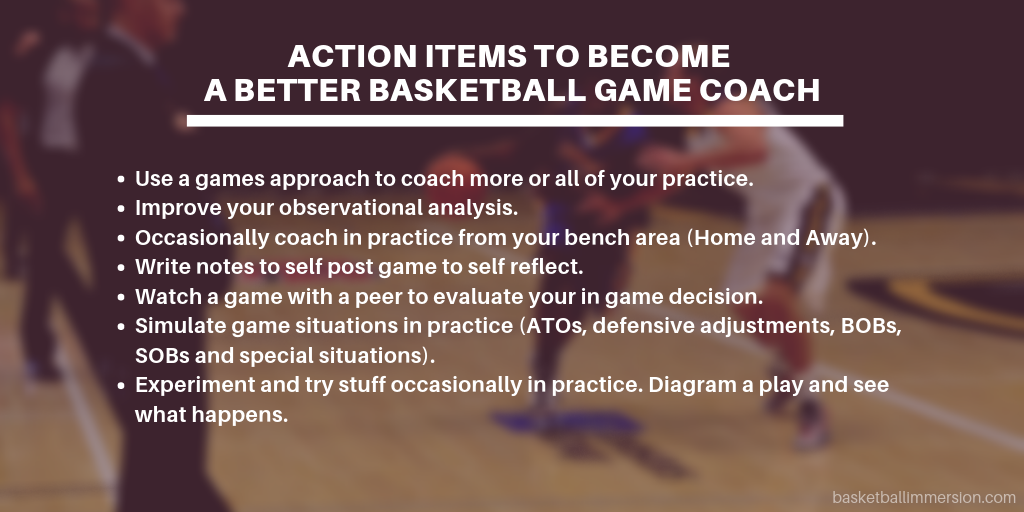