In Dave Smart’s Carleton basketball program competition is a big emphasis. They want players  to compete in everything they do. Their shooting workouts are not exempt from competition. They use shooting charts as a platform to create a competitive shooting environment.

Shooting is arguably the most important skill in basketball and one they take very seriously. Players are expected to shoot every day. The goal is for every player every day to make 80 out of 100 three-point shots. The shooting charts are used for tracking success, and competitive emphasis.

If a player can reach the 80% goal, their shooting is complete for that day (unless of course they want to continue shooting). If they don’t, they keep trying until they get to a minimum of 1000 shots. For some players, this can require two or three attempts. For others, they end up shooting their minimum 1000 shots. This encourages players to take their shooting seriously so that they can get through their workouts faster and be more efficient with their time.

Dave Smart took the time to answer some questions about the shooting charts.

Do they shoot with a partner?

They often come in with a partner and shoot together, or if a shooting machine is available, they do it alone.

How do we know they aren’t cheating?

When they shoot with a partner, the partner holds them accountable. The reality is when they do it alone, there is no sure way to guarantee they aren’t cheating. However, we help our players understand, if they cheat whatever they are doing, they are only cheating themselves.

If a player claims he’s made 80 out of 100 threes consistently without needing to get to 1000, and that player shows up in practices and in games, and can’t make a shot or can’t shoot it with confidence…odds are they are probably not doing it the right way.

When are players shooting these shots?

To clarify, when we talk about 1000 shots, that is done outside of practice. In a practice our players get an average of 300 or so shots.

Do you do any form shooting?

Form shooting is something players add on their own prior to their shooting workouts.  Some players who need more attention spend that time with a coach. If we are working with a player to correct their shooting form, we don’t let them shoot 3s until they get to a place where we feel they have corrected their major shooting flaws.

For shooting purposes, we keep a chart. The chart contains every single member of our team. It is just the names of the players on the white board. Nothing fancy. Simple and effective. 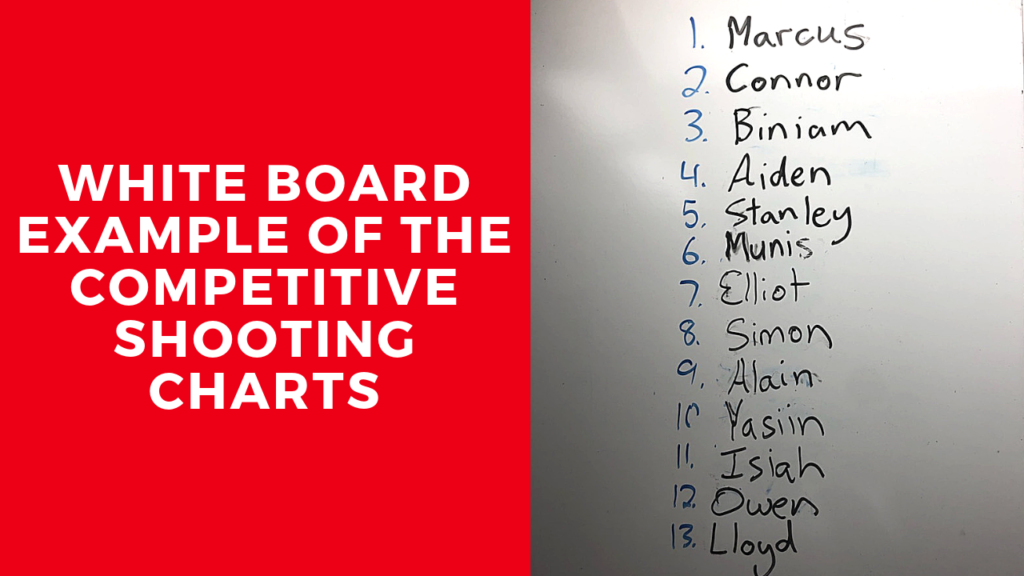 How can they become “King” of the shooting charts?

The goal is to be the “King” of the shooting charts. This means they are number one on the numbered chart.

There are two different ways to become the ”King” of the shooting chart.

Every practice throughout the week is designated as an “odd or even” day. On odd days, odd numbers defend their position. (i.e. 1 defends versus 2, 3 vs 4, 5 vs 6, etc.) and on even days “even” numbers defend (i.e. 2 defends versus 3, 4 vs 5, 6 vs 7). These match ups come into play during our practice in all our shooting drills. Whether it be during pairs (partner shooting), flare shooting, spacing , or pin down shooting, the players and their opponent are keeping track of their individual score.

For example, after the first shooting drill Player A could finish with 25 makes and Player B with 27, which would mean Player B is currently up 2. During the next drill if Player A out shoots Player B by 3, he would now be up 1.

At the end of the practice, whichever player won the day, would move up or keep their spot on the chart. On an odd day, 1 vs 2, if 1 beats 2, he would keep the title, if 2 beats 1 he would then move to number 1 and formerly 1 would become 2nd on the charts.

2. Challenge Outside of Practice

Another way for players to make their way up the charts is by challenging a player outside of practice. If the 3rd player on the chart wants to move up, he can challenge the 2nd person on the chart. They would then find a time that is convenient for both of them that day to shoot at least 250 three-point shots.

The players, both shoot 25 threes at a time at 10 different spots, making their way around the arc. After every spot of 25 there is a winner (i.e. 3rd rank goes 19/25 and 2nd rank goes 20/25, 2nd ranked player on the chart would win that spot and go up 1-0). At the end of those 10 spots there would have been a winner determined. In case of a tie after 10, players can pick one last spot as a tie breaker.

Why do you value the shooting chart?

Do some players only shoot (Not drive or dive)?

Some players only shoot. For example, some of our smaller don’t get to drive or dive, only shoot, because of their size, and inability to finish at the rim.

How do the shooting charts impact motivation?

Most players want to play on the perimeter and understand that on our team that means having to have the ability to shoot.

Never before access! It’s here for you. Learn from one of the greatest minds in basketball who opened his doors and shared the game with us from one of the most successful basketball programs in the world. Go to www.davesmartbasketball.com