Players like to play more than they like to practice. Practice, however, is necessary to player and team development. No matter what you do as a coach a certain amount of practice is tedious and boring to a player. This is because practice involves focused repetitions of skills and decisions, and repetition is often boring. My goal is to as much as possible increase the amount of enjoyment and engagement for a player in practice. The best way I have found to accomplish this is to replicate the game that a player likes to play as much as possible in practice.

I have also chosen to use a games approach to coaching basketball because it combines skills training and mind training. This best simulates the demands of actual competition. This is because basketball puts a player in countless decision-making situations. Success in a basketball game is complex. Making things even more difficult is that basketball is played under relatively unpredictable conditions. Each player must apply both skill and decisions in their execution of offensive and defensive tactics.

To do so, players need to be exposed to real life situations in training to reproduce game-like movement solutions. In other words, practice should be as specific to reality as possible. We can do this best using a games approach to coaching basketball. The goal is to maximize the transfer of skills and decisions to competition.

The games approach emphasizes first learning what to do, then how to do it. Or, more simply, teaching and learning the game while playing the game. 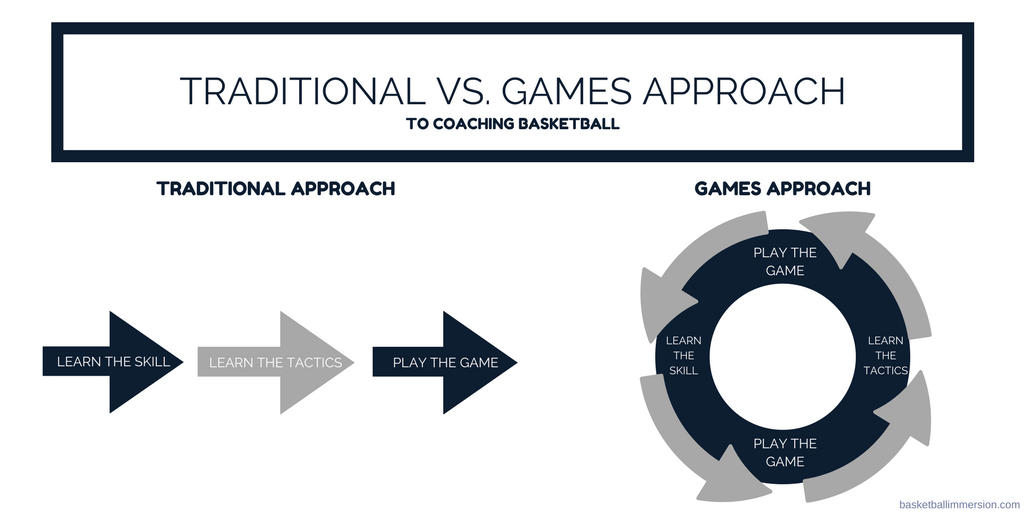 Basketball is too often coached in a traditional linear way. The main problem is that for a large part of this linear progression present in traditional coaching  there is no context to the skill practice. Such practice is often of less value due to the need to perform skills with teammates and opponents in mind. Practicing basketball without defense may provide some benefits to initial learning and timing of sequences, but the practice is mostly superficial because it is removed from the context of the game application. Removing decision making from a drill or skill work removes the distracting information and visual cues that are present in a game.

A games approach has a more holistic relationship with skill and tactical learning as the learning is always anchored to the game because a game is always being played. In a basketball game, the decision and skill cannot be separated. Basketball is played in an open skill environment. An open skill is a skill that takes place in a dynamic and changing environment.

The opposite of an open skill, is a closed skill. A closed skill is a skill that takes place in a stable, predictable environment where a player knows exactly what to do and when to do it. This does not describe a basketball game, but coaches often drill basketball skills as if they were closed skills (training a skill in isolation – lay-ups, dribbling, shooting with no decisions or defense).

For example, dribbling a basketball in space with no defender present could be classified as a closed skill. The dribbling is being performed in a relatively stable environment. However, when this same skill is performed during a games approach to coaching drill (small-sided game or 5-on-5), the player is faced with numerous defenders creating an unpredictable, unfamiliar and unstable environment. This same skill of dribbling is now classified as an open skill.

Since a basketball game environment is open and constantly changing, the movements have to be continually adapted. Skills are therefore predominantly perceptual.  A basketball player must know what they are trying to do before learning how to do it. Decisions and skills should almost never be separated. This is because every basketball skill must go through the open skill process so it is more effective to teach a player how to play in an open environment that simulates the game. 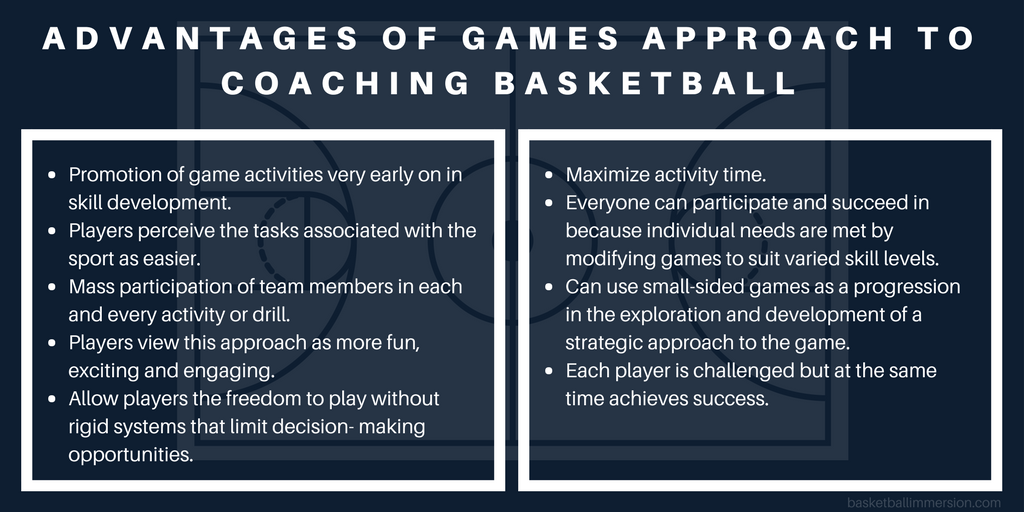 In a games approach players develop an understanding of the game and identify the technical and tactical skills required. If necessary the coach may intervene to assist players with technical skills or discuss tactical aspects. Players practice the skills in conditions that relate to the game. Players are introduced to a game requiring skills that are both tactical (what to do) and technical (how to do it).

Before you do intervene ask yourself these questions:

If I intervene, will I make a difference?

If I give the player some time and direction, will they find the answers for themselves?

Here are the coaching interventions we use within our games approach to coaching basketball. We use these words to coach our players. A foul means there was a mistake that we need to correct. Recreate means we are going to go back create a situation again to teach; this gives our players a context for what we are trying to improve. Remind means we are going to remind our players about a concept we have coached already that they are not executing. Demo involves us demonstrating a concept within the game to help our players see what they are doing well or what they need to improve.

Interested in learning more about a games approach to coaching basketball? 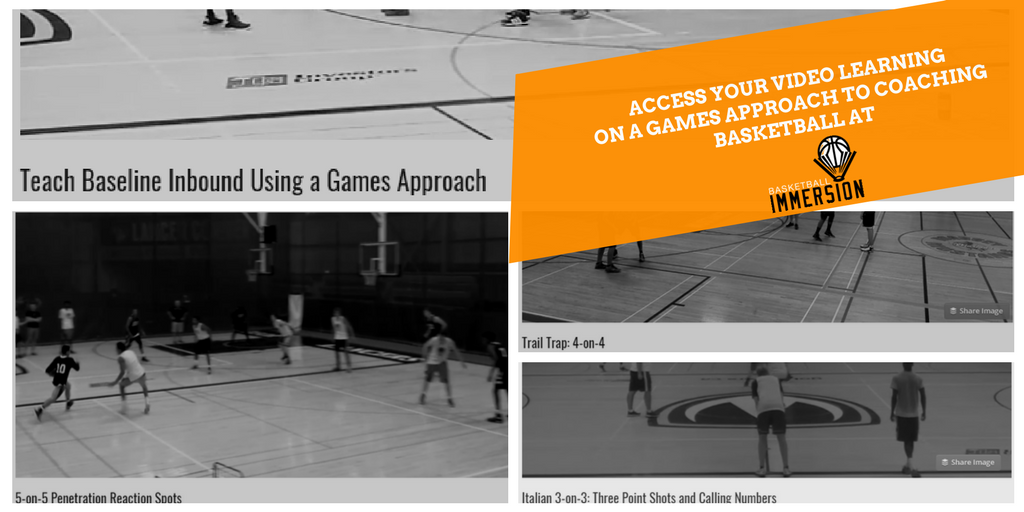 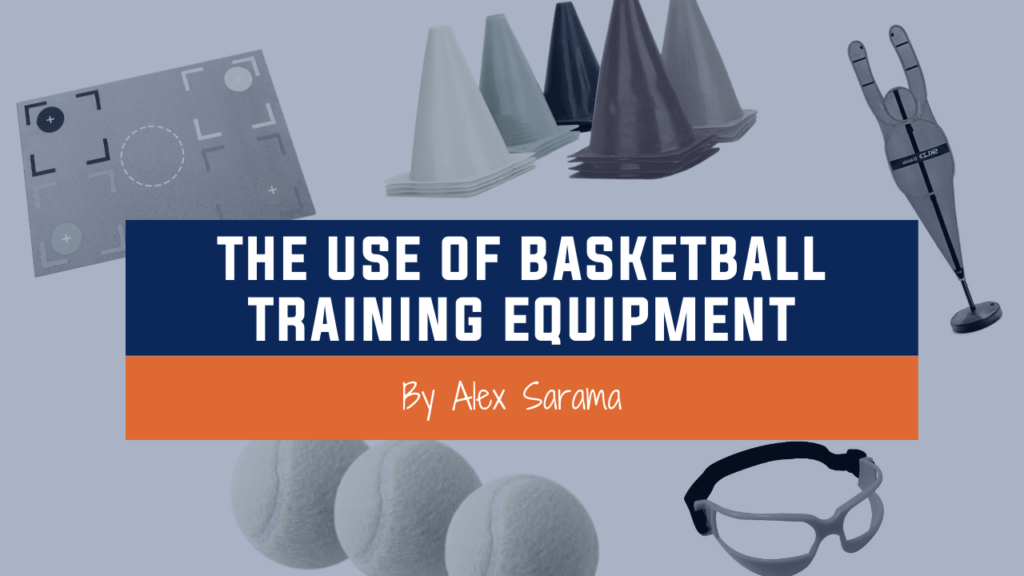