Home » Blog » How to Improve Your Baseline Inbound Plays

How much time do you really spend on inbound offense? How many inbound plays on average do you run per game? What is your success rate? Whatever your answers to those questions are we want to give you eleven tips to improve your inbound plays.

We want the four players on the floor to set up as quickly as possible. The Inbounder however should get to the ball as slowly as possible. This allows time for their teammates to get into position. It also allows players time to make reads on the inbound plays.

Sleepers are automatic reads that occur because the defense makes a mistake in their initial inbound defensive coverage. Both players involved in the sleeper must read the opportunity and ideally make eye contact prior to the action.

Another way to use deception and to run multiple plays is to run a set play out of different formations. For example pick the picker can be run out of a box set, a line set, a triangle set etc. One is advantage is that your players only need to remember one or two actions. Those actions can then be run out of different formations. Another advantage is that it gives your opponent the perception of your team having more inbound plays then you really do. You could run three different formations for the same play. This makes it seem like you have three inbound plays when you really have only one.

Here is an example of common baseline inbound plays being run out of multiple alignments.

You can also run the same play on sideline and baseline inbound plays.

Below is an explanation of this topic including examples of a BOB and SOB play that can be run on the baseline and sideline.

An important special situation concept is to hold off on running a counter to an inbound play you have already used until the second half. This will provide a scoring opportunity when needed.

This is especially relevant in grade school or high school gyms where space is an issue. Have your inbounder stand deeper to allow for spacing on the inbound pass. The spacing can give them a better angle on the pass. Some officials designate the spot but always make them move the inbounder rather than settling for where they try and place you. Standing deeper can also help preventing the inbounder from turning the ball over by accidentally stepping over the endline.

Teach the inbounder how to read how their defender is positioned in defensive coverage? 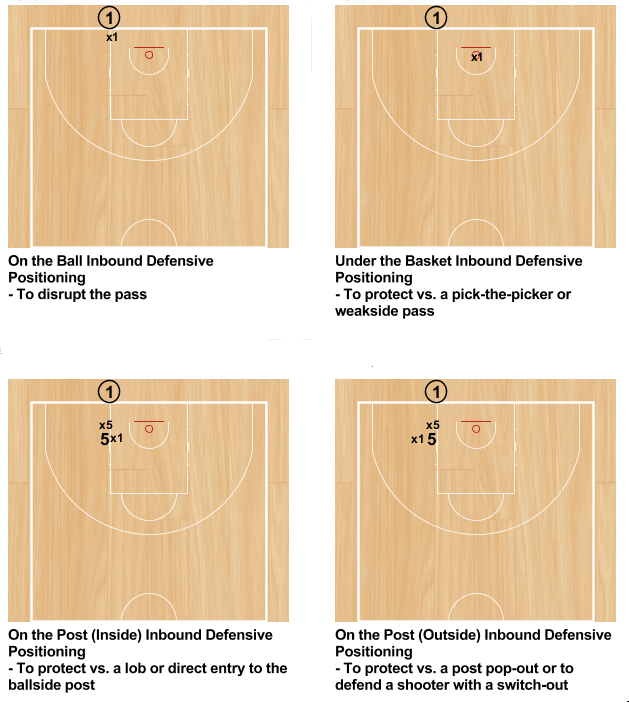 If you want your team to be effective on inbounds then teach players who to screen and the consequent reads. Just like player-to-player offence, an inbound play’s effectiveness will be determined by the details. The screening angle and the cutter’s reads depend on their defender’s path. A curl, rejection and flare are all reads similar to any other offensive screen.

Have you ever noticed that your players are not particularly engaged in 5-on-0 inbound practice? As one player out it to me when he became an assistant coach after his playing days were done, “There was nothing more mind numbing and useless than practicing 5-on-0 inbound.” I totally agree and after initial teaching we only practice inbound vs. defense. Just like all forms of offensive and defensive learning, developing your player’s understanding and execution of inbound decision making develops best in the context it must be performed.

Here is one simple idea to teach inbound in a realistic way using a 5-on-5 challenge.

Half-Court, Full-Court from Inbound (Member Only)