Let me start by giving very simple examples of both so that you understand what I’m talking about.  Block practice is going to the free throw line and shooting 100 free throws in a row.  Random practice would be shooting two free throws 50 times throughout a workout.  Both result in 100 free throws, but the random shooting practice more closely simulates a game.

Another example of blocked practice is repeating the same shot over and over. For example, shoot ten or more repetitions of a dribble jumper from the elbow, and then move to another spot and repeat another ten shots.  It is easy to make this shooting practice more random. Random would be shooting one shot, then moving to the next spot.

There is a big push towards random practice, but you need to be aware of how to use it.  Sure, random practice closely approximates games and helps players focus on a single shot rather than allowing them to get in a rhythm.  The people that love random practice will tell you that you should never shoot the same shot twice because that never happens in a game, and for that idea, they are correct.  They will tell you that if you are always missing the first in a block, then making ten in a row, sure you are making a good percentage but you are missing the most important one all the time.  There is validity in this for sure, but don’t overlook one very important component of block practice.

If a player is building a brand new habit, they need the blocks to learn to find some consistency within the blocks.  In the first couple of workouts I have a new player, trying to build a new habit, it is not uncommon for the player to shoot the same shot 100 times, and only have 2 good reps.  That’s fine.  Hopefully they start to learn what those good reps feel like and are able to execute them more regularly.  Maybe they have 5 good reps on the second day, and 12 on the third and start to build the habit.

If you start to implement random practice when a player is only shooting 12 out of 100 well anyways, you are going to limit their ability to grow, they are going to get frustrated, and potentially give up before the habit is in place. In other words, if a player can’t consistently repeat good technique, making the situation more difficult or more random isn’t going to help them any.  In this case, I believe that block practice is necessary in their development.

Now, let’s imagine that the player gets to the point where they are shooting 80 of the 100 shots well.  Random Practice will be very helpful at this point.  They have demonstrated enough competency to be able to execute the correct habits in a block, now can they execute on command?

I stood at a golf driving range several years ago and had one of the most important moments of my coaching life.  I was listening in on the lesson being given behind me.  There was a middle aged woman, fairly new to the game, being instructed by an older gentleman.  With every swing, she got new feedback on a different part of her swing.  “On that swing you did this”, then she would take another swing trying to correct that mistake.  “But on that swing you did this…”, and she would then change her focus to correcting THAT mistake.  Every swing a new mistake that needed correcting.  The coach, to an extent, was creating random practice in a block situation by not allowing her to focus on correcting one mistake before moving on to the next.  I was getting anxious for her, and I wouldn’t have blamed her if she had suddenly screamed in frustration “shut up, shut up, shut up!!!”.

How can we expect players to build new habits when we never put them is a safe environment with enough time to build that new habit?  Understand that building new habits is really hard, and simple drills that give appropriate time to think and feel the new habit are crucial.  If you put an athlete in a random situation before they have mastered the block then you run the risk of them giving up on the whole idea.

There is a story of shooting coach Chip Engelland and Steve Kerr doing a creative workout together.  At this time in his career, Steve was struggling with coming off the bench and only getting a couple of shots per game, usually while cold.  So he and Engelland did whole workouts where Steve would shoot one shot, then go and sit down for five minutes.  Then Engelland would have him sprint onto the court and shoot another shot before sitting down again.  Kerr “worked out” for 30 minutes and shot six shots.

Terrific idea… if you are working with Steve Kerr, who can already shoot, but was struggling to apply those habits in a new situation.  This method wouldn’t be used with a player that is either new to the game, or struggling to make 50% of their free throws.  In that case, Block Practice will serve you better.

So if you are still working to build a new habit your workout might look like this: 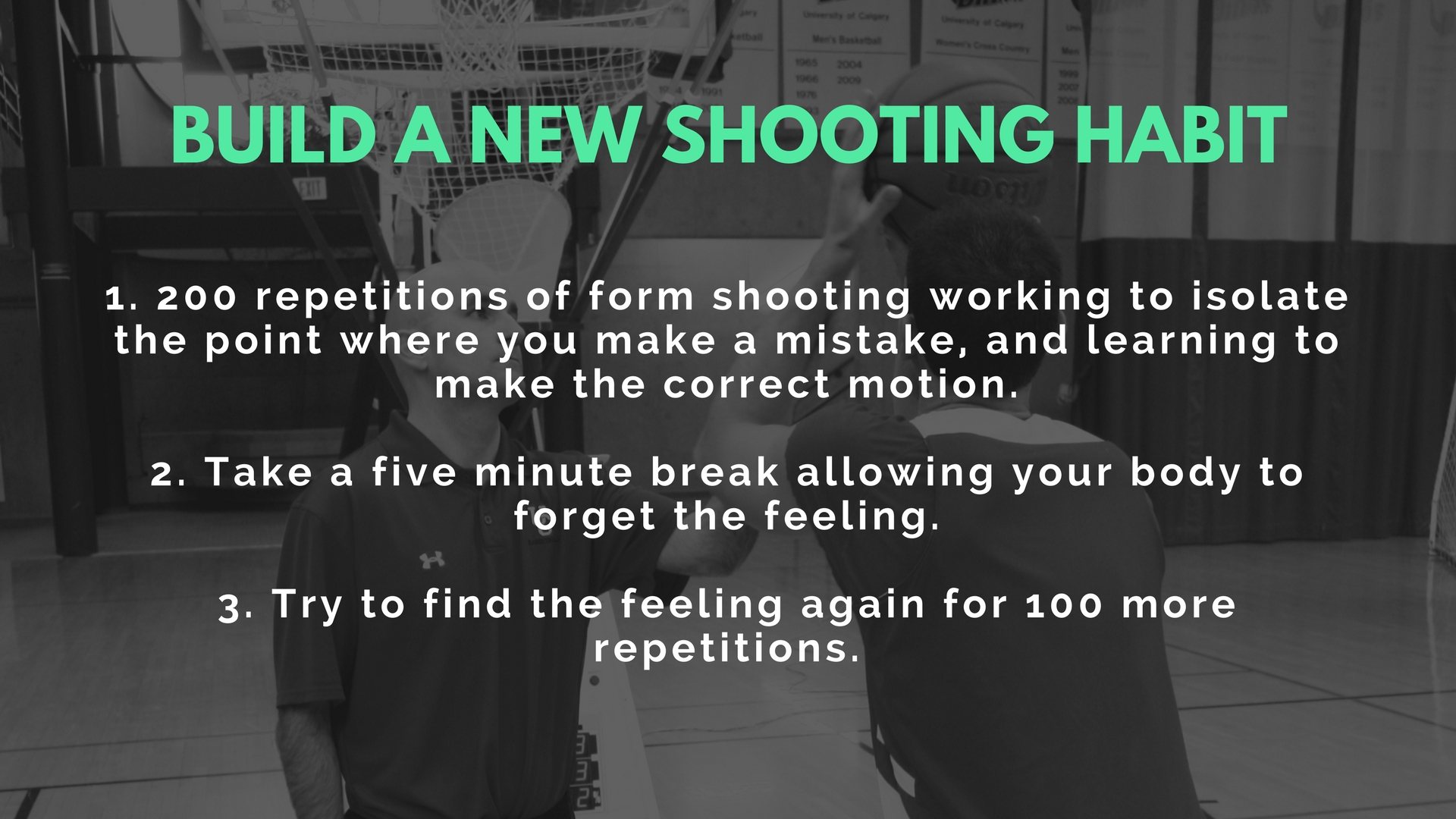 If you have the habits in place, your workout (after warming up) might look more like this:

You can then layer the drill by forcing the player to react to your play call as the ball is being passed to them. You might direct them to “drift to the corner and shoot”, then immediately call “dribble hand off one dribble pull up” on the next. The key is to not give them much time to pre-plan.

Make sure you understand both ideas and have a sense when the appropriate time to use each would be.

Dave Love is an NBA Shooting Coach, having worked for three teams and with dozens of NBA players to improve their shooting.  You can follow him on social media @coachdavelove or subscribe to his free newsletter at www.coachdavelove.com/pages/newsletter