In this week’s coaching conversation, Florida Atlantic head coach to Dusty May joins the Basketball Podcast to share insights on taking over and building a basketball program.

In his first season at the helm, May led the Owls to a winning record for the first time since 2011 and an appearance in the College Insider Tournament (CIT), just the third postseason appearance in school history. Graduate forward Xavian Stapleton was named Conference USA Co-Sixth Man of the Year and senior guard Anthony Adger made the All C-USA Third Team. For his efforts, May was a finalist for the Joe B. Hall Award, given to the best first year coach in Division I. As a team, the Owls set records for rebounds, rebounds per game, 3-pointers made, and free throw percentage. The Owls also scored 2,322 points, the second highest single season total in school history.

May continued the success in his second year, leading the Owls to their second winning season in a row, the first time that happened since the 1996-97 season. FAU won 14 home games, it’s most since joining Division I, while averaging 71.1 points per game, its highest average in nearly a decade. May also became the fastest FAU coach to reach 30 wins at the D-I level and collected 16 Conference USA wins and 34 overall wins in his first two seasons at the helm, the highest totals of any Owls’ coach at the D-I level. May capped off the campaign by leading the Owls to a 66-56 win over Old Dominion at the C-USA Tournament. The victory was the first in-bracket, neutral site conference tournament win for FAU since 2002.

The 2020-21 season was another winning campaign, and as the third consecutive under May, he is now the first coach since the program joined Division I to do so. The Owls again notched a win at the C-USA Tournament, and were at the top of the league and among the nation’s leaders in total rebounds (first, and No. 9 in the nation) offensive rebounding (first and 29th), rebounding margin (first and 13th), 3-point percentage (first and 16th), scoring margin (second and 20th), 3-pointers made (third and 17th), scoring (third and 38th), and field goal percentage (third and 59th).

May joined FAU after three years as an assistant coach at the University of Florida, where he helped the Gators compile a 69-37 record, including back-to-back NCAA Tournament appearances. The Gators reached the second round of this year’s tournament after advancing to the Elite Eight in 2017. As a full-time assistant, May’s teams compiled a 274-166 record (.623 winning percentage).

May served six seasons (2009-15) as assistant coach and associate head coach at Louisiana Tech. In his final season with the Bulldogs, the team went 27-9, including 15-3 in Conference USA to win the regular season championship by two games, and went 17-0 on its home court. Louisiana Tech won 49 of 50 home games from February 2012 through the end of the 2014-15 season.

May was a student manager for the Indiana University men’s basketball team and after graduating began his professional career as an administrative assistant/video coordinator at USC from 2000-02. He returned to Indiana in an administrative role for three seasons before taking his first step as an assistant coach with Eastern Michigan (2005-06). He has also served as an assistant at Murray State (2006-07) and UAB (2007-09). 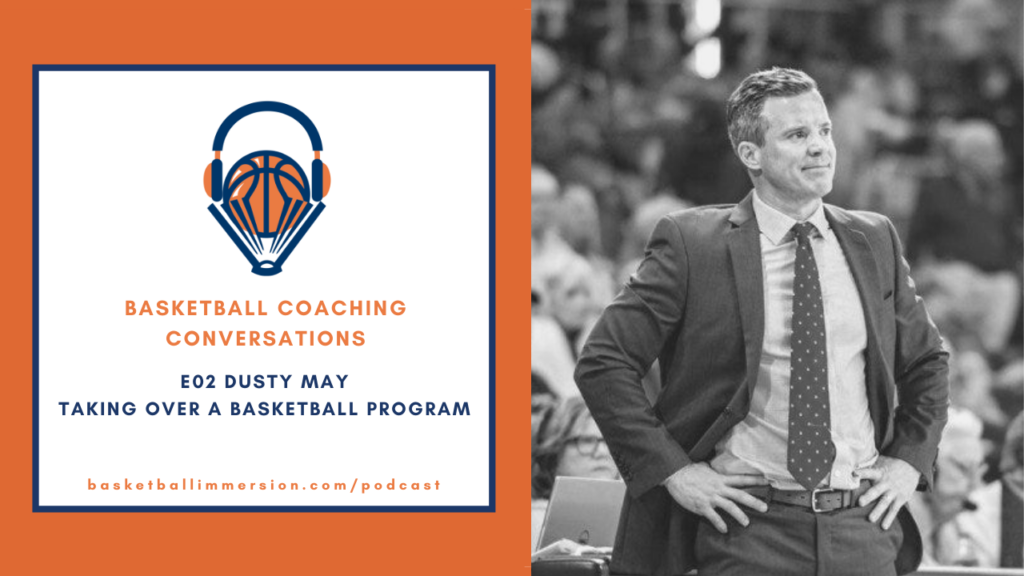 “We want to play out of concepts and live in our guys’ strengths…figure out what our guys do well and let them play.”

“I’ve learned more from my players than any coaching clinic…the guys should have the freedom to play the game.”

“We want to be a good offensive rebounding team, so if I can’t anticipate what shot you’re going to take, it’s probably not a good shot.”

1:00 – First Action Item of a New Coach
2:00 – Current Roster Transition
3:30 – Improving the Roster
5:30 – Getting Better Players for the Program
6:30 – X and 0’s
8:20 – Coaching Ideas and the Process
9:30 – Playing with a Fast Tempo Philosophy and Establishing that Identity as a Program
11:00 – Scouting Individual Strengths and Giving Trusts to the New Set of Players
13:00 – Scoring Percentages in the Half Court vs Transition
14:40 – “Was that a Good Shot?”
16:00 – Next Steps after Roster Transition
18:00 – Individual Skills vs Team Concept in Training
20:00 – “Beating the Best Team in the League” Philosophy
22:00 – Coach May’s Basketball Coaching Philosophy and Applying other Coaching Philosophies
24:00 – Tweaking and Evaluating Offensive Plan
27:00 – Reading Books outside Basketball
29:30 – The Coaching Staff
31:00 – Empowering Players
32:00 – Seeking Feedback from Players
34:00 – Game Preparation for future Opponents
35:30 – Discussion on Western Conference Finals Game 7
40:00 – NBA Philosophies in the NCAA Game
41:00 – Building Chemistry Off the Court
44:00 – Recruiting Players who Love the Game