Marlin, the 13th coach in the school’s storied history on the hardwood, has been at the helm of one of a squad which has made five postseason appearances, a school-record 27 wins in 2017-18 and a pair of Sun Belt Conference championships. 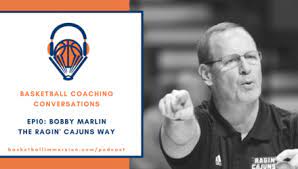 “Communicate every which way you can . . .. but I think the most important communication is still face-to-face.”

“We take a lot of pride in [player development] . . you know the old saying, ‘sometimes players should play one level below what they think their level is and two levels below what their parents think they should play.”

“Most great players want to be coached . . They want you to get in the gym and spend time with them and make them better.”

“You may have a team but when you have a great program, the older guys teach the younger guys and I love that about our culture.”

“We really work hard on pushing the basketball . . that’s something we emphasize in our very first practice . . it starts with good guard play and good decision making.”

“We love to run off corner threes . . because we think we’ve got the advantage already out of the starting blocks.”

“Everybody wants to play at a higher level, but if you can’t guard a smaller player, you’re going to have trouble playing at that level.”