Tod Kowalczyk has turned the University of Toledo men’s basketball program into one of the best in the Mid-American Conference during his decade-plus run at the Rockets’ helm. Toledo’s mentor will enter the 2021-22 campaign looking to continue a run of success that has elevated the Rockets into one of the top mid-major programs in the country.

Toledo captured the Mid-American Conference title last year with a 15-4 league record, the second time in Kowalczyk’s tenure the Rockets captured the overall MAC crown. In 2018-19, Toledo tallied the second-most victories (25) in program history, captured its second straight outright MAC West Division title and earned a berth in the National Invitation Tournament. Now in his 12th year at Toledo, Kowalczyk has guided the Rockets to five 20-win seasons in the last eight years and has posted a 167-95 win-loss mark during this stretch.

In fact, the only losing season Kowalczyk has experienced at the helm of the Rockets was in his first season. Toledo posted a 4-28 ledger in 2010-11 before posting a 15-win improvement in Year Two and capturing a share of the MAC West Division title the following season. Those building blocks evolved into a 2013-14 campaign that brought unprecedented success for the Rockets. Toledo established a school record with 27 victories that season, captured a share of its eighth league regular-season title and appeared in its eighth National Invitation Tournament. Kowalczyk’s imprint hasn’t been felt just on the hardwood. One of the most respected coaches nationally, Kowalczyk served as the chair of the NCAA’s Division I Men’s Basketball Ethics Coalition from 2018-20.

“The most important thing you can teach your players is how to space the floor.”

On spacing: “We coach it, preach it, teach it, emphasize it every day.”

“So, most of our concepts . . and automatics are not necessarily program driven but personnel driven.”

“Unskilled players can still help you win but they have to be cutters, screeners . . they’ve got to be offensive rebounders.”

“Right now we’re in the middle of camp . . a bunch of little kids here . . our drill sessions, I’m not ashamed to say it, at that level are all offense.”

“What I found was, because we had less hours and less days to practice . . we had to be more efficient. We had to teach more out of 5-on-5 situations.”

“The older you get, you’re going to see the value in scrimmaging and shooting . . we do scrimmage more and we try to shoot more because those things really, really matter.”

“I think maybe the greatest way for an assistant to learn the game, is to become a great scout. Be great at scouting opponents because you can learn so much from that.”

“Every year we have go-to plays. And those go-to plays . . some will remain consistent but most of them are different every year.”

“We need to shoot more threes . . and how you do that is in transition and then have some really good spacing.”

“One thing I’ve tried to share is organ donation and the power of that. To me the most selfless act that anybody can do is to help somebody live by giving their organs or tissue after they pass . .” 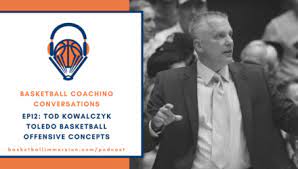