In this week’s basketball coaching conversation, former Belmont University head coach Rick Byrd joins the podcast. Some of the many highlights of the podcast include discussions on building a program with staying power, skip passes and offensive efficiency at the rim.

Byrd, a Knoxville native, led Belmont to eight NCAA Tournament appearances and 17 conference championships in his final 14 years. He also retired first among NCAA Division I head coaches when ranked by percentage of schools’ all-time wins; Coach Byrd is responsible for 62.4 percent of Belmont’s total victories. 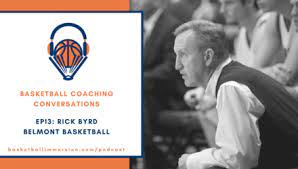 “I think my job as a head coach. . is for our basketball program to enhance the school . . so I’m really careful about the character component in the young men I recruit.”

“If I could evaluate a player in any setting at all, it would be to watch him play a pick-up game when he didn’t know I was watching.”

“We’re supposed to be part of the educational process . . I do think coaches tend to lose sight of that in just trying to win games.”

“All of offensive basketball is about getting more than one person to have to guard the action . .”

“If you don’t have an inside threat . . then you’re not going to get good shots.”

“If we draw up the prototype [post player], it would be guys that are always looking to create angles inside so that when they catch the ball they’ve already got the defense in a bad spot.”

“The number of terrible two point shots I saw this year made me want to go watch tennis.”

“The reason we don’t switch a lot on defense is because there are too many gray areas . . if the offense is patient enough, they’re probably going to take advantage of it.”

“There’s something we can do with almost any way people are trying to defend us.”

“There’s just too many times when I see that we’re still mistreating players in the way we go about coaching them and the way we talk to them and the things we say to them.”