He is the current head coach for Bayern Munich of the Basketball Bundesliga (BBL).  Trinchieri has been a EuroLeague head coach for five years with Cantu and Brose Bamberg while in 2014 he was named the EuroCup Coach of the Year after leading Unics Kazan to the Finals. In the EuroBasket 2013, he was the head coach of the Greek national team.

Andrea Trinchieri is considered one highly crafty coach who is able to recognize talent and take the maximum from every person in his squad. A case for the latter is also the fact that throughout the years, the Italian coach helped multiple players take their careers to another level.

Some notable examples of the latter are forward Darius Miller who returned to the NBA following a two-year stint under Trinchieri in Bamberg, forward/center Daniel Theis who struck a deal with the Boston Celtics after playing under the Italian coach, forward Nicolo Melli, guard Janis Strelnieks and three-time EuroLeague champion center Kyle Hines. 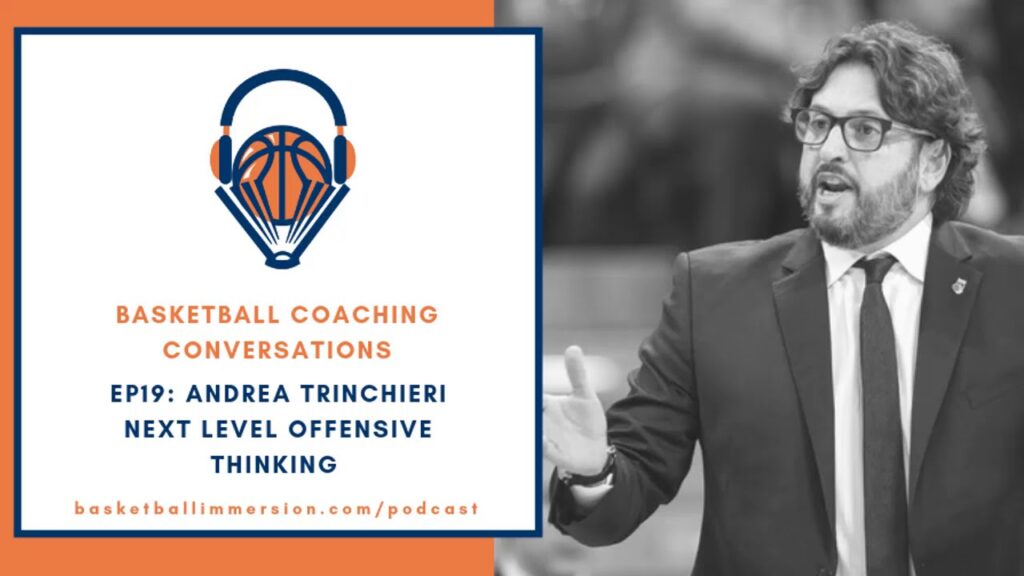 “Below average teams, play pick and roll as a two man game. Good teams involve 3 or 4 players in the pick and roll action. Great teams are able to play with 5 players”

“Offense is action. Defense is reaction . . . If you’re able to . . make the right decision, the defense can cover 2 or maybe 3 players but the fourth or fifth man are going to be open.”

“The spacing is the most important thing . . you have to keep moving to adjust to all movement of the ball.”

“I’m obsessed with spacing . . you need to stretch the defense.”

“I love to develop one topic per practice. Through playing in practice you can coach everything . . but you have to correct . . most of the key mistakes.”

“Angles of the screen are very important. I want the bigs to run to create the small separation . . and [I want] the guards to wait for the screen.”

“We have to play the right way. Action and reaction. I guarantee my players, if you are able to play at the right speed and with the right decisions, the defense cannot stop you.”

“When the ball passes by your shoulder, you have to make your quickest step to the rim. “

“If the defense goes under, I want that they pay, so the angle of the screen should be a little with the back towards the corner or the baseline . . so if they go under I can take speed and go downhill.”

“If you are able to move the ball against a show very early, they are done. The defense must rotate and you have an open player.”

“The worst thing to do when they try to show on the ball is to hold the dribble.”

“When you load your team with information, you see them like and old computer that is slow.”

“The biggest thing they are doing at Golden State is how they are able to make them play the right way without choking their creativity.”

“[If something is not working . .] As a coach, I call a situation where it is easier for my players to see the right read and deliver the ball as soon as possible.”

Q: “What are some of the characteristics that you find successful coaches have?

A: “Culture, passion/love for the game, being able to be honest with their players . . creative, true, self-ironic, and never be afraid to say ‘It’s my mistake, guys.’”

“The biggest problem I see now with players is . . they are not interested enough in what they are doing. Basically, they are not watching basketball.”

“I believe that Fortnite is the biggest enemy of a young player. I have no problem with video games but . . when you do one thing, you have to commit.

“At a certain point, I force my players to watch games and to have a conversation the day after. Because how can you be better if you don’t see the best.”

“No more than 15 minutes in the film room [with the whole team] . . and that means 7-8 minutes of clips because when you talk, basically that’s double.”

“Another thing I feel is very valuable is, when you call a timeout, you call the play for two plays . . especially at the end of the game.”

“If we are able to go consistently crash the boards, we will have more threes – and that’s good. So, I always go for the [opposite] corner crash . . and I say to my bigs, ‘Spin off the first obstacle.’”