Among his many achievements, Mike Procopio served as a Strategic Game Management Coach for Kobe Bryant from 2009-2012, breaking down his game film as well as giving him insight on upcoming opponents. Bryant won two NBA championships with the Los Angeles Lakers during the four-year period. “He’s my Jack Bauer,” said Bryant in a 2010 Sports Illustrated article. “He gave me all the edits and scouting reports and wrote defensive rotations of the Celtics. He was my eyes and ears, so when I played the game I’d use all the scouting reports and all the information. And it was huge for me.”

In addition to working with Bryant, Mike Procopio served as an NBA Player Development Coach with ATTACK Athletics from 2003-2013 and was an assistant coach for the Maine Red Claws of the NBA Development League (now known as the G League) from 2009-2010. He has also worked at several Nike Grassroots Basketball Camps and Skills Academies both in USA and China since 1996. 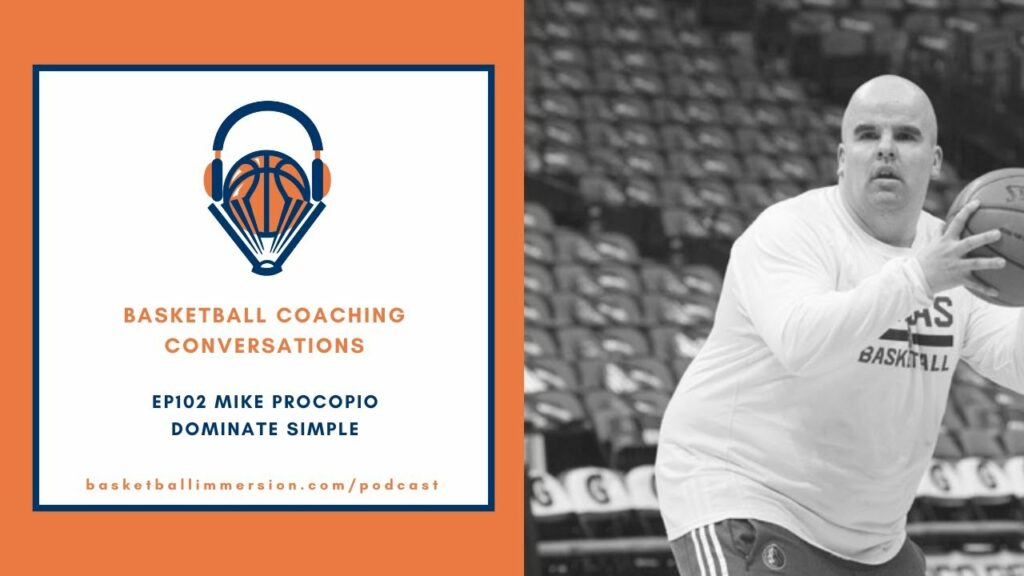 “I think you have to sit down with players and talk with them about possessions. . and the majority of things that happen in a possession.”

“I worked very closely with Kobe Bryant for four years . . You watch all the great things he would do, the unbelievable shots he would take with three guys on him . . but you watch the majority of his possessions . . were catch and shoot, catch and drive . . it was a lot of simplicity.”

“Most of these players, in the summer at all levels, they’re working 90% of the time . . on stuff they’ll do 2% of the time. You’re burning the midnight oil working on things that won’t make you relevant as a player.”

“You have to build the coach’s trust. A veteran coach like Rick Carlisle is going to be like, ‘Look, I need to know what to expect from this kid every night. And it has to be simple or I can’t play him.’”

“You have to . . build your baseline of ‘this is the simple things that I do.’ Dominate that and be very efficient doing that, then we can start adding some things.”

“There’s a graveyard of players that came into the league highly drafted . . and they wash out within 12-18 months because they were very inefficient; they couldn’t work in a system where they had to play off of three other better players.”

“When you’re working with youth players you want to build a baseline of what you can rely on and what your coach can rely on and be really good at that and now let’s move the needle and give you a little more.”

“You have to start somewhere and it can’t be eight dribbles, spin, step-back, step-through floater. It’s got to be a catch and shoot, a drive, reading situations, playing off the ball, defense, doing these other little things that they can . . set a baseline on.”

“Analytics hates the floater . . but it’s a necessary shot for not-great athletes, big guys who play on short rolls that can’t kick it out to an open player on the roll and they can’t get to the rim . . I really think the floater is a decent shot, if you practice it.”

“With the finishes, there definitely needs to be more emphasis on weak hand development and having these players shoot a lot more with their left going to the basket because you limit players if they’re only going strong hand all the time.”

“When you’re teaching shooting . . or certain skills, you sort of want it to be the same all the time . . but with lay-ups . . training the brain to do some different things on those finishes would definitely benefit the player.”

“Getting to the free throw line takes so much pressure off you as a scorer . . once you start getting away from contact, then your angles shorten up, the angles on the shot are different – they’re tougher.”

“Initiating the contact and getting to the free throw line more . . is a good philosophy for players when they’re trying to finish around the basket.”

“Emphasizing simple things on the catch like the catch-and-go is really important with young players.”

“They [Kobe Bryant, Tracy McGrady] had a philosophy every time they caught the ball; they had a plan of attack and it was consistent.”

“I think you have to teach a player that you’re much easier to guard in certain situations if you’re just playing at one speed, even if that’s a really fast speed.”

“If [when training a player] you don’t see the process being done correctly, don’t wait nine reps before you correct it. You correct it right there and tell them why.”

“I always believe in ‘Repetition. Correction. Move on.’ The players need the reps . . but they need to be corrected . . the correction can’t be a five minute correction.”

“When you’re working with a player . . if you’re working on all these isolation moves . . but that isn’t their role . . their brain’s been trained to play a certain way based on their routine . . if their routine doesn’t fit what they’re doing in games . . you’re really going to have a confused player.”