In this week’s basketball coaching conversation, Perth Wildcats head coach Trevor Gleeson joins the Basketball Podcast to discuss the flex offense and the concepts that make it successful.

Since joining the Perth Wildcats of the Australian NBL, Gleeson has become the club’s most successful coach, making the finals in every season and claiming five championships in 2014, 2016, 2017, 2019 and 2020. He is the only Wildcats coach to win multiple championships at the club, and in December 2019, he became the eighth coach in NBL history to reach 400 games.

Gleeson’s coaching career started in his hometown of Warrnambool, Gleeson had his first stint in the NBL between 1997 and 2000 as an assistant coach with the Brisbane Bullets. Between 2000 and 2004, Gleeson coached in the Continental Basketball Association in the United States.

After two years in South Korea, he returned to Australia in 2006 to coach the Townsville Crocodiles. Five seasons in North Queensland brought significant success, guiding the team to five consecutive post-season appearances and winning the NBL Coach of the Year Award in 2011. He then spent a season with the Melbourne Tigers and then worked with AFL clubs North Melbourne and Hawthorn before the opportunity to join the Perth Wildcats arose in 2013. Additionally, between 2014 and 2016, he served as an assistant coach for the Australian Boomers. 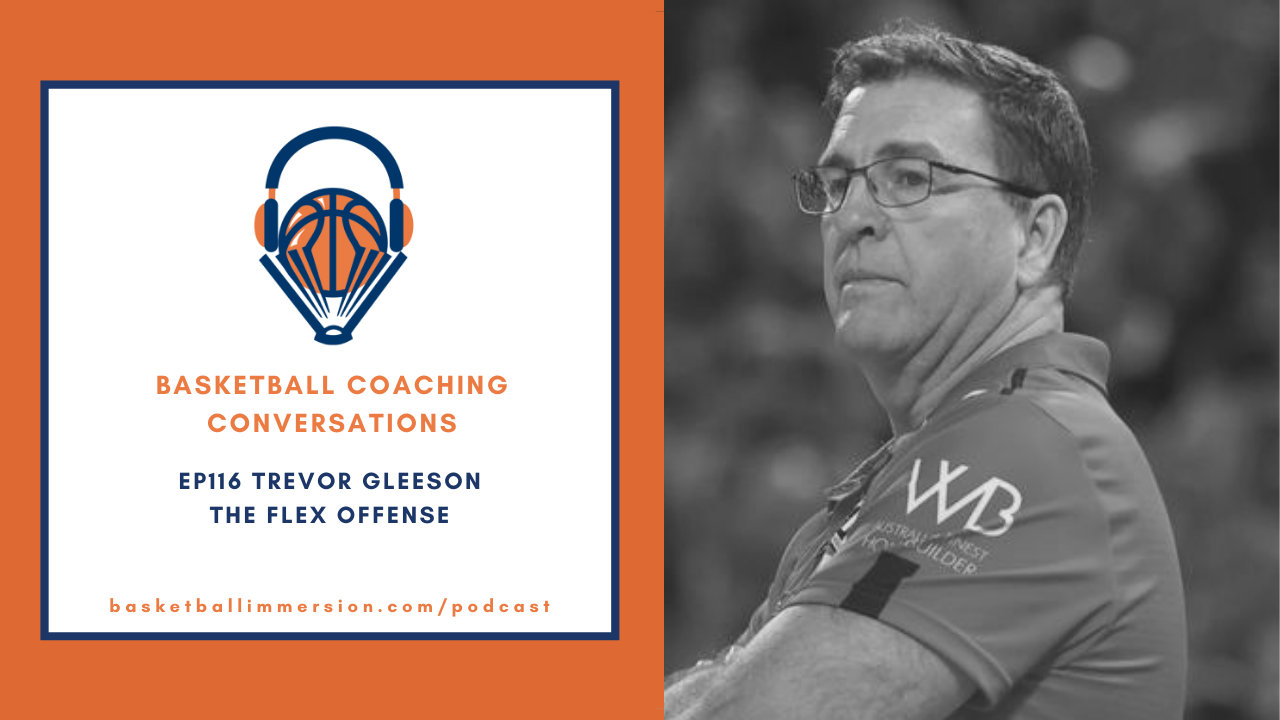 “It was really nice to get an easy basket from the defense making a mistake. And we know that the first flex cut is really to check the defense.”

“You’ve got to cut hard. You can’t just cruise through it and not be live on the cuts.”

“It’s really demoralizing for the defensive team to play this good pressure, but then you’re giving up layups. We work on cutting a lot.”

“We want to flatten out the defense. So, if we can go baseline, typically when . . teams defend it, they want to push us into the screen and bump us. We find the baseline cut is faster and we find we get more options out of that.”

“On offense, . . the better footwork that you have, the faster you become. That means the shot gets up quicker . . as soon as you do that, you’re a much better threat from the perimeter.”

“What you want to do at the end of the day . . is teach the guys to play what’s in front of them and not so much a pattern. Have a pattern to get your spacing and to get the ball into the right people’s hand.”

“We find some guys don’t like a pick and roll late clock because it’s a chance to trap them with eight seconds to go. So, if that’s a mismatch, we’ll most likely separate the floor and let him attack or pass it into the post.”

“I think, as a coach, . . your job is to create opportunities for your best players . . we all say we want equal opportunity offense, but I want my best player shooting the ball. I want him to take his shots out of the offense.”

“You’ve got to highlight the areas that you want to see repeated. So, if you’ve got [a player who] makes a hard cut but doesn’t touch the ball at all but htat cut created an opportunity, you’ve got to praise it. And if you have video, you show it . . so [the player] is getting praised . . he didn’t shoot . . but that cut is so vital to create opportunities for the next phase of the offense.”

“Anything that highlights the offense [doing something] without scoring . . you’re going to get traction from your players when you do that. And it’s critical to do that because it’s unselfish. Sometimes they don’t think that hard cut is a part of anything of the offense but it’s so important.”

“Every day we have five minutes with no dribbling, half-court 5-on5 and it’s messy . . and then we open it up another five minutes with one bounce allowed . . we want to create space and opportunity and I think those two drills that we do . . really help that.”

“We want to throw the ball into the post 20 times a game or in the short corner and work off cutters and step-ups.”

“It’s the little things. It’s the cutting angles, it’s the speed of the cuts, it’s our spacing; don’t forget that because it’s a big part of why it’s successful.”