Žan Tabak is currently serves as a head coach for Basket Zielona Góra of the Polish Basketball League and the main coach of the Slovak national team. His basketball career, spanning twenty years, was marked by several notable achievements, including being the first international player to play in the NBA Finals for two teams.

Žan Tabak was chosen in the 2nd Round of the draft, (51st pick) of the NBA by the Houston Rockets. Between 1992 and 1994 he played in the Italian League where the best basketball in Europe was being played. In his two seasons in Italy, both Libertas Livorno and Olimpia Milano, averaged double figures in both points and rebounds. Žan Tabak spent 6 seasons in the NBA in two stages, playing in the NBA Finals twice and winning a championship ring, with the Houston Rockets. He played for four teams in the NBA – Houston Rockets, Toronto Raptors, Boston Celtic and Indiana Pacers.

His coaching career started as a scout for the NBA Houston Rockets. He worked as a technical assistant to Joan Plaza for several seasons, both at Real Madrid and in Seville, before becoming a head coach. As the head coach, Žan Tabak has coached in leagues such as LEB, ACB (3 teams), the Euroleague, the Polish League, and the Israeli League. 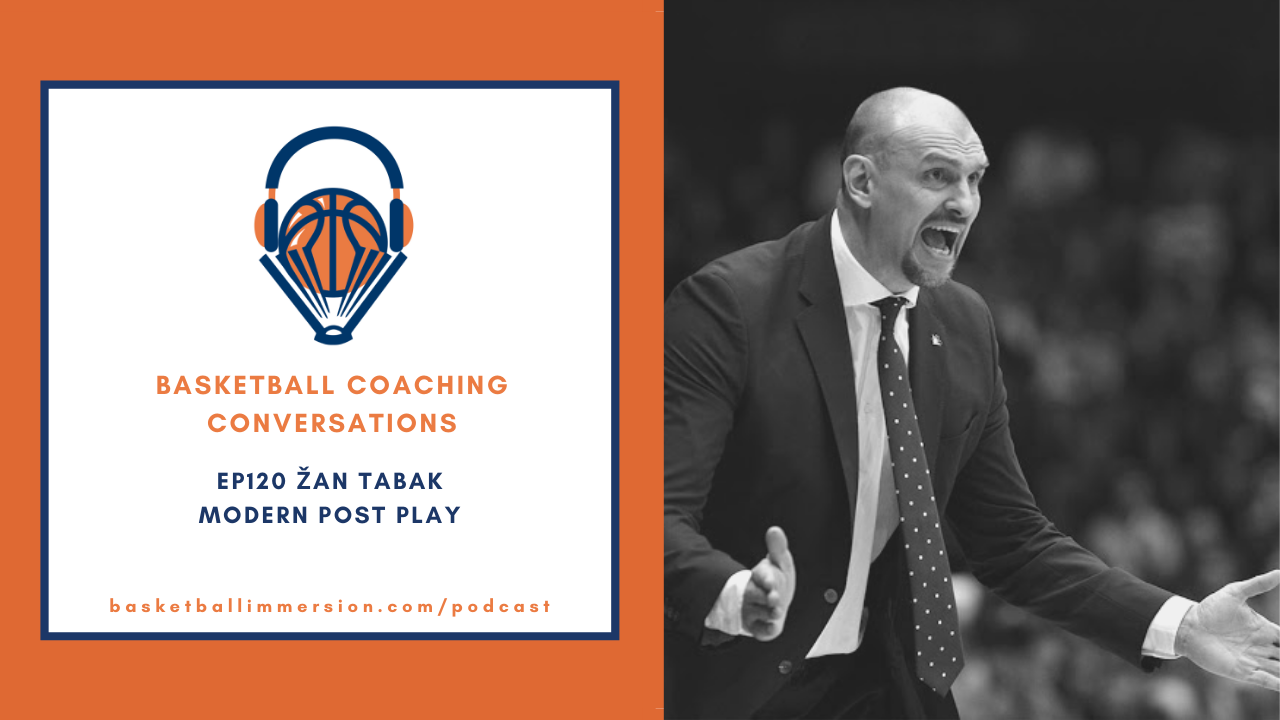 You can get the player that can play inside, but that same kind of a player on the defensive side of the court will usually have a big problem.”

Today . . the big man scores mostly off of driving and passing . . or from the quick pass in traffic without being able to dribble the ball . . for that, you need to have good hands . . good hand-eye coordination.”

“Today’s big men really need to have good lateral quickness . . height is an advantage, but if it is not followed by a good athletic part, the height cannot be used.”

“When somebody is setting the screen for you, I’m teaching all the player not to roll anymore by turning their back . . keep running . . do not peel back. The difference between beating your man or not beating you man, scoring or not scoring, is the first step after the screen. So, it’s important the first step is explosive.”

“Usually, when you have someone who is really good on the low post, the other team is not used to it. They don’t have the other post defender so usually they go with the double team. The most common double team we are finding in Europe is a double team from the last man on the weak side coming from the baseline.”

“The players who know how to finish with contact – every year there are less and less of them. That’s why I think there are a lot of shots where we are putting the body in between the ball and the defender . . a hook and a jump hook are essential if you want to play effectively in the post.”

“In the team shooting drills . . we say to the players. ‘Okay, let’s make 200 shots.’ Everybody is assuming, let’s take outside shots. On my teams, the people who are playing under the rim, they are required to take 50 percent of the shots . . with their back to the basket.”

“I’m not the kind of coach who is playing conservative defense waiting for the other team t make mistakes. I prefer to force them to make mistakes.”

“From my experience as a player . . if you run 10 times . . twice you’re going to receive the ball; eight times you’re going to draw attention by running through the middle and some of your teammates are going to get a shot.”

“If you are not ready to get hit and manage with the contact, you cannot play inside. So, if you are looking to teach somebody how to play inside, you should expect from Day One that he is willing to do that.”