In this week’s basketball coaching conversation, Vermont head coach John Becker joins the Basketball Podcast to discuss their defensive commitment. Under Coach Becker the University of Vermont men’s basketball team has been consistently ranked as one of the nations top defenses. Their defensive philosophy and techniques are shared.

He was taken Vermont to five straight America East Championship games, the first program to accomplish the feat since Drexel from 1992-97, and seven out of the last nine. He owns a career record of 219-91 and holds a 121-21 mark in America East play at Vermont. His five national postseason tournament wins are a program and America East coaching record. In the last four seasons, his Catamounts have posted the three highest single-season win totals in school history –29 victories in 2016-17, 27 wins in 2017-18 and 2018-19, and 26 in 2019-20. He is one of three coaches to register 20 wins in each of his first nine seasons at a single school, joining Gonzaga’s Mark Few and former Pitt coach Jamie Dixon. Becker has produced the league’s Player of the Year in each of the last four seasons. 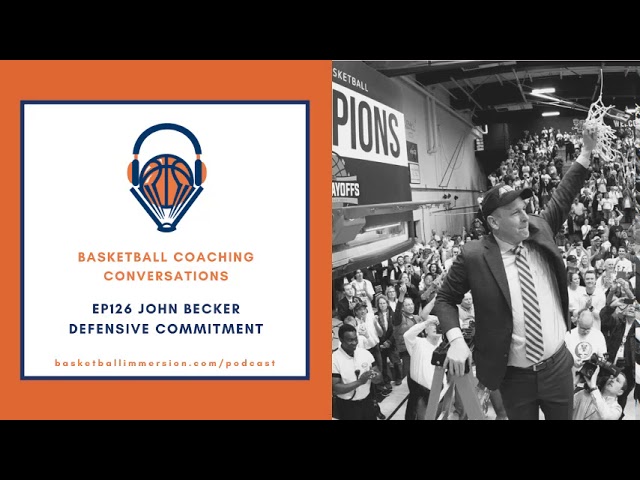 “We have a very structured, disciplined defensive philosophy but we’ve had to evolve as the game has changed . . and one area where we’ve really made some changes is off the ball.”

“We basically have . . decided to sacrifice offensive rebounding for improved transition defense. And I think last year we might have been one of the top 10 transition defensive teams in the country.”

“Whether we’re in transition or we’re in the half court, one of our tenets is you’ve got to have the ball in the hole covered. And then we kind of build our defense around that until we can get set.”

“We have high expectations on both sides of the ball but especially on the defensive side of the ball.”

“A majority of our practice is defense. We build up every day systematically from closeout techniques, to sliding, to a rebounding drill, to a scramble drill, to a transition defense drill, to shell drill. Within the shell drill we’ll have four or five different segments a day covering different actions.”

“I think one of the most important things for a great defense is your ability to scramble and the key to scrambling to me is getting the ball stopped . . I think the key is to close out short when you’re in scramble.”

“We do a lot of film work. Every practice is filmed and I’ll go through the defensive stuff and we’ll break it down.”

“Hard hedging is kind of a thing of the past . . it really exposes you if the guards are good enough to . . get the ball out of there cleanly . . in today’s game you’re in scramble and you’re really opening yourself up . . I do think it’s the hardest way to guard so it really tests all of the facets of your defense on and off the ball.”

“Guys closing out too tight to the ball is a very common thing . . so we want to fight that and, if anything, close out a little bit short, advance to the ball an arm and a half length away, use your length and pressure the ball with your feet and with your hands.”

“We aren’t trying to get into passing lanes and steal the ball and, at the rim, we’re not trying to block shots. I really believe in making a team score over you . . we want to have high hands.”

“I’m just not into gambling defenses because I think there’s just too many times you’re going to let a team score without having to earn it . . we really want to be disciplined, we want to be physical on the drive on any ball that’s being dribbled, we want to be organized.”

“I want players to have trust and to be able to play and not be overthinking things and so that’s really a big key. Defensively, it’s not overly complex . . but the one thing is, we’re going to be disciplined.”

“For me, pace is created by defensive stops. If you’re getting turnovers or rebounds . .your offense flows, you’re just playing in a secondary break.”

“One thing I hope with our teams is that we are not going to beat ourselves and we’re going to make you beat us.”