In this week’s basketball coaching conversation, Serbian professional basketball coach Aleksandar Džikić joins the Basketball Podcast to discuss economy of coaching and other basketball philosophies. His last team as head coach was Movistar Estudiantes of the Liga ACB. He has also been head coach of three different EuroLeague teams, Union Olimpija, Lietuvos rytas and Budućnost.

Starting in 2005, Aleksandar Džikić was an assistant coach position for the Minnesota Timberwolves under head coach Dwane Casey for three seasons. He was the very first NBA assistant coach with no prior coaching experience in the United States at either the collegiate or professional level. Additionally, he became just the second European native to be hired as an NBA assistant coach, after Igor Kokoškov who got on the Los Angeles Clippers coaching staff in an assistant role in 2000. 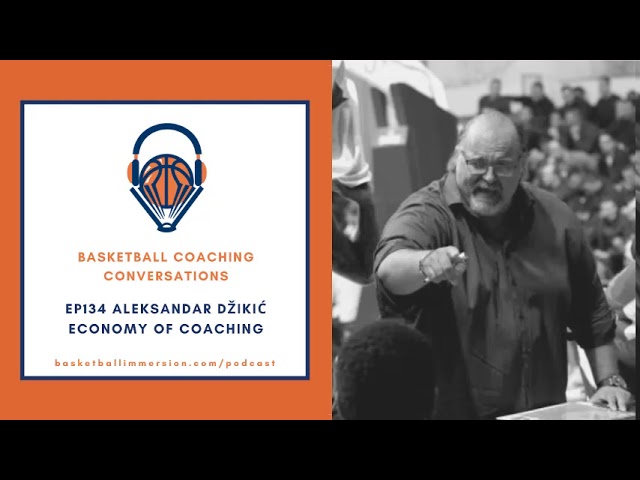 “What is so simple and ordinary for us basketball people, we need to understand that fans probably are not aware of it, or they don’t have knowledge about it.”

“There are . . tons of edited clips . . showing . . what some coach, team or player are doing, but not necessarily explaining why they’re doing that, when, and how. And I believe those three questions are a little bit more important than what [they are doing].”

“I’ve started using that term ‘economy of coaching.’ . . it’s how to coach, teach, lead, help your team and your players in the most efficient way . . I’m trying not to do anything or as little as possible [that] is not connected to the game.”

“When we are talking about the young guys, I believe that it’s very important to understand how you want your player to look or to play basketball, after you finish [your time] with him . . if I know what skills player has got to have on a high level, I should work with him preparing him for that level.”

“I believe that it’s our job to teach them [the layers] the essence of basketball, so they can play for different coaches after they are finished with you.”

“It’s all connected to what we are using in a game. For example, one of the things I call the automatics, I believe that’s one of the things that you need to establish as soon as possible during the season, at the start of the season. Like for example, what do you want to do when the ball goes into the low post?”

“Not necessarily every player [is going to] be able to beat his man in a one on one situation . . but I like all my players to know how to attack and efficiently attack close-outs which I believe it’s a different type of skill.”

“I believe that the coaches should never find themselves in a moment when they think, ‘Well, this is it. I don’t want to learn anymore. There’s nothing else for me to figure out.’ . . because you never know what type of players you will coach in the future.”

“If we want to be honest, 99% of us we don’t have full control of the players we will work with . . you have to adjust yourself as a coach and maximize their potentials, and minimize their weaknesses. And that’s why I believe you have got to have more knowledge; more knowledge means an easier approach to new situations and more adaptability, more flexibility in your work, methods, and goals of coaching the team.”

“Teach the way you think basketball will be played in the future . . there are 11 spots on the court where you can start your picking roles. So we are teaching how to attack all those 11 spots; we’re talking about different angles, different players, and different spacing, connected to all that action. And if those kids are learning that from me, wherever they go after me, it’s going to be easier for them.”

“Scramble defense is also a very important part of every successful team, because you don’t control everything that was going on on floor.”