In this week’s basketball coaching conversation, Cleveland State head coach Dennis Gates joins the Basketball Podcast to share his philosophy around teaching and learning with ten ways to teach and ten ways to learn. In just one year Coach Gates has revived a Cleveland State program.

Gates, who owns 16 years of Division I coaching experience, has spent the previous eight seasons on Leonard Hamilton’s staff at Florida State. Gates’ tenure at Florida State mirrored the Seminoles rise to national prominence. With Gates on the staff, the Seminoles played in four NCAA Tournaments, advanced to the Elite Eight of the 2018 NCAA Tournament and advanced to the Sweet 16 in both 2012 and 2019.

Gates began his career as a coaching assistant with the Los Angeles Clippers as a skill development coach during the 2002-03 season. He worked with a collection of players that included 10 prospects with three, or fewer, years of experience including future All-Stars Elton Brand and Lamar Odom.

Gates has learned from some of basketball’s all-time great coaches including Hamilton who ranks as one of the top 10 all-time winningest coaches in ACC history. He played, and coached, under Braun at Cal, Tom Crean at Marquette, Ricardo Patton at Northern Illinois and David Carter at Nevada. 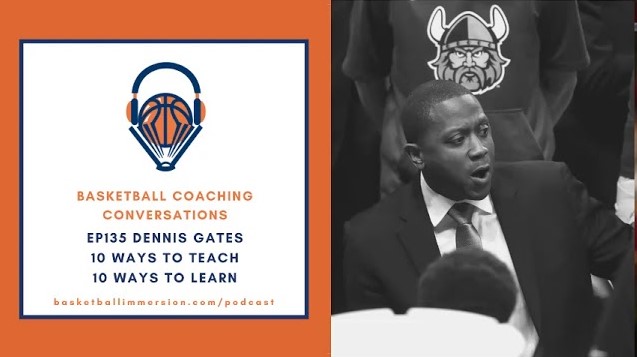 “There are several ways to learning . . it’s important as teachers to understand the student athletes that we have and . . to see what type of learning they need.”

“Sometimes, as coaches, we forget that it’s not about what knowledge we have, it’s the ability of those young people to absorb it . . We make the mistake of expecting the kid to learn how we teach.”

“Lesson Objective learning is lesson learning with intention behind it . .where you can measure the development of a player . . and [it] should allow student athletes to know and be able to do the objectives at the end of the plan.”

“We have to emulate and try to simulate practices on how our games should be and our games are not perfect . . I want [players] to figure it out on their own . . and try to find the solution.”

“I find that for some guys, if I text them a clip to their phone – the same tool they use on their social media – that kid will execute it a lot better than me telling it to them.”

“Our young people make us better, they make us think, they make us try to look in the mirror and reflect and see how we can become better coaches . . they’re going to tell you they don’t understand by their actions and sometimes . . they’re telling us at that point, ‘Coach, you need to figure out another way to teach me.’”

“My players know that sometimes they have to dig down and not just explain something to me but give me the different ways that this can be solved whether it’s on the court or off the court.”

“Instead of memorizing the plays and scouting reports, the players are able to learn by doing.”

“I want them [the players] to ask as many questions as they can think of and that builds confidence because you’re transparent . . we get taught at a very young age . . that there’s no such thing as a silly question . . your peers don’t always make you feel that way and I want them to be encouraged.”

“When you allow others [to question and provide solutions] you’re empowering them to teach because that’s what discussion-based learning is . . [it] prioritizes learner acquisition of knowledge, skill, attitudes through the whole discourse.”

“When we allow ourselves to understand why I’m coaching this way and why this kid is learning this way, it will allow you to identify and connect the dots a lot quicker.”

“The worst thing you can do is sub somebody out of the game and then sub someone in and they make the same mistake that the person in front of them made . . their reflective learning wasn’t taking place.”

“It is very important that I try my best to teach them this [reflective learning] on their own and how to pull it out of themselves and not just wait on a coach to initiate it.”

“I want to continue to develop our leaders . . you’ve got to ask a kid to be responsible in managing conflict resolution, being an example, be caught up in the strategic part of it . . you’re asking for a lot.”

“We cannot take the full confidence of a kid, we’ve got to allow them to experiment . . it gives kids self-awareness of where their strengths lie.”

“There’s not corrective learning without behavior modification . . you have to reinforce the expectations but also correct player errors . . corrective learning teaches the points in the process where the player has to understand what will be a better consequence or a better solution.”