Over the last 13 years, St. Thomas’ winning percentage ranks near the top of Division III, with a 313-66 record (.820 win %), including a 220-38 slate against conference opposition and four 30 win seasons. John Tauer has twice been named a Division III National Coach of the Year — in 2013 by Basketball Times, and in 2016 by both the National Basketball Coaches’ Association and by D3 News. Tauer also has received West Region Coach of the Year in five in his seasons and five MIAC Coach of the Year Awards.

Among Division III men’s coaches, John Tauer was the second fastest in history to 200 victories and is believed to have won more games in his first five seasons than any coach in Division III history. His .808 win percentage ranks first among active Division III coaches, and in the top five among all active NCAA men’s coaches.

Tauer’s first nine Tommie teams have compiled a 211-50 overall mark (.808 win clip). Tauer’s winning percentage ranks in the top five of all 1,000-plus NCAA coaches, and he is the only coach at any level with both an NCAA championship trophy and a winning percentage above .800. His record includes a 160-33 record against conference opponents, an 8-for-9 run in MIAC regular-season championships (solo or shared), and a 15-6 record in the NCAA tournament.

Tauer was the first MIAC coach to sweep conference and playoff championships in each of his first two seasons as head coach. He’s also the lone conference individual — and one of a small number of coaches nationally — to have played in, been an assistant coach, and been a head coach at the Division III Final Four. In addition, he is the first MIAC coach to win regular-season titles in each of his first six seasons. 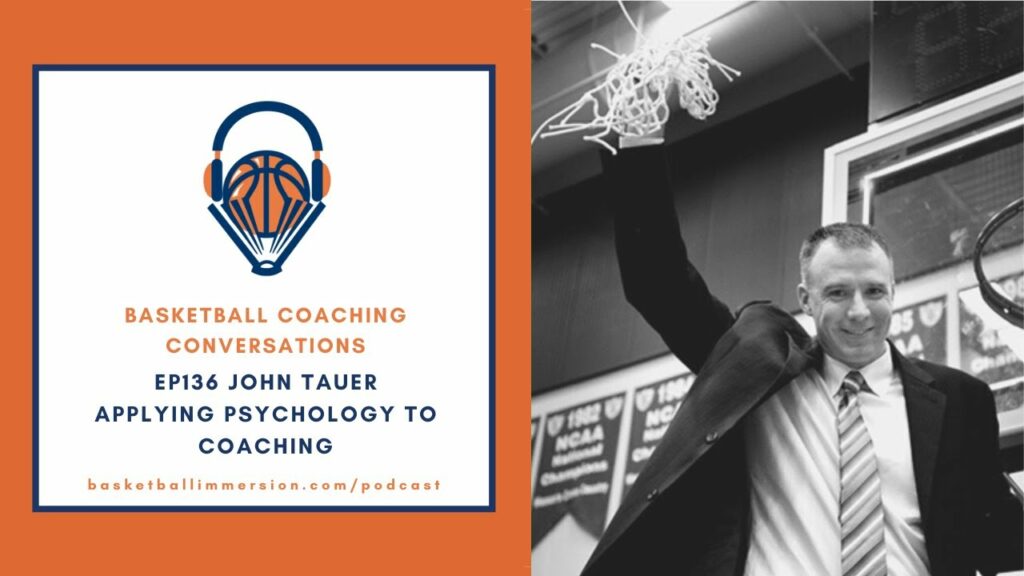 “We want them to play really fast and really free . . To score over 80 points a game and have about nine turnovers a game requires an understanding and a vision among the players of we’re not just going to play fast and reckless. And it also requires the coaches to let go sometimes rather than micromanaging and calling out a set or multiple sets on every possession.”

“We certainly don’t talk a lot about turnovers, we talk about taking care of the ball and valuing things in life.”

“If you ask players what percent of your passes do you think you should complete? Most young players will say 70 or 80%. And then when you explain to them that we’ve got 60 plus possessions in a game and about five passes of possession and 300 passes in a game, [if] you complete 70% of those, that’s 90 turnovers.”

“To break it down, for us to have only five passing turnovers a game is somewhere around 295 [completed passes] or 98.3%. And so that’s not a magic number, but it’s one of those numbers that gets their attention where we want to complete 98.3% of our passes. And if you’re throwing a bunch of 90% passes, we’re gonna have 30 turnovers again, and we can’t have that.”

“If every practice, starting on day one, they feel like if I make a mistake I’m not going to be able to dig out of this, that’s going to lead to a lot of fear. And so in practice, we really try to combine skills and a lot of competition.”

“I think that it’s important in practice to sort of provide guardrails, but also give guys the chance to grow into new roles and demonstrate the skills they’ve worked on.”

“Promoting autonomy within an offense can be challenging, because everybody has their role. And not everybody loves their role at every time in the season or every point in their career. And so I think the other part is helping them to see that making the right decision over and over again will give them more autonomy.”

“I do think a big part of our job as coaches and teachers, is to create learning and playing environments that are motivating, that are energizing, and allow young people to walk out of there feeling better about themselves and more excited to come back the next day.”

“Every young person is different and every parent is different. And I think first and foremost as youth coaches [we need to do] two things: number one, laying out expectations. But number two, making very clear those expectations are centered around providing the best experience possible for somebody’s kid.”

“As a 14 year old, the things that are painful are different than when you’re 48. But I think those are the reminders that parents need to know . . that it’s difficult to grow without a little pain.”

“This is where you tie it back into intrinsic motivation, that if you’re doing something you love, and you’re working on a really challenging drill, you can look at this as ‘I’m struggling’ or you can look at it as ‘I’m getting better.’ . . the idea is getting them to see that just because something’s hard, doesn’t mean that it’s bad.”

“And so I think . . as parents, we can’t try to raise the next Joe Mauer or the next LeBron James, we’re trying to raise a really good citizen who’s going to make informed decisions in life.”

“Empathy is something that allows us to put ourselves in the shoes of our players and think, ‘If this were my kid, am I treating this person the right way?’ Yes, they just got blown by three straight times. And yes, that’s unacceptable. But what’s the best way to give them hope to get them excited to get a little bit better?”

“What will companies be craving 20 years from now and even today? People who are able to negotiate conflict in a calm understanding [way] . . and people who are really creative. Those are two skills that . . if we don’t allow our kids opportunities to learn those through sports, we’re doing them a disservice.”

“I think that’s the other thing we can do: remind parents we aren’t going to be perfect. Sports aren’t about being perfect. Sports are trying to build teams that are willing to work for each other, and be tough under the toughest conditions to prepare themselves for life.”

“If you [open practice to parents] let them know . . here are six or seven things that we expect our players to do every possession and so watch your child when they don’t have the ball to see if they’re doing those things. Parents, even parents who are coaches, are naturally going to watch their own kid more than watch the game.”

“And we all want to hear somebody tell us, we’re good . . the art of coaching is trying to get people to see a different reality that benefits the team which can be difficult.”

“If I believe a guy is a great shooter, then the only thing I’m going to tell him is, whenever you are open, shoot it. Every single time.”

Why Less is More For WOSPs: How To Be The Best Sports Parent You Can Be