Coach Brondello is the current head coach and VP of player personnel of the Phoneix Mercury. She took over the helm in 2013 and made an instant impact. During her first season, Brondello coached her team to the best record in the league, won coach of the year honors, and took home the WNBA championship. She has continued to have consistent success taking her team to the playoffs in every season. In just her 7 years with the Mercury, she has become the winningest coach in franchise history and holds an impressive 17-13 record in the postseason. Also, Sandy Brondello has coached and optimized the play of notable WNBA players like Diana Taurasi, Brittney Griner, and Skylar Diggins.

Before Phoneix, Sandy Brondello was an assistant with the San Antonio Silver Stars WNBA team from 2005-2009. She then moved on to the Los Angeles Sparks as an assistant and influenced a few of their playoff runs. Sandy is also the current head coach of the Australian Women’s National Team. Brondello has continued to help grow the game and make women’s basketball prevalent in Australia.

Sandy also had a fantastic playing career where she racked up several accolades across the world. During her 17 year career, she was a WNBA all-star, Australian league MVP, and 2-time European cup MVP. Most notably, Brondello guided her nation to 3 Olympic medals from 1996-2004.

Sandy has become one of the all-time great coaches in the WNBA and has done so by emphasizing attention to detail, ball movement, and player commitment. Coach Brondello will be entering her 8th season with the Mercury this summer and plans to make a run at the WNBA Finals. 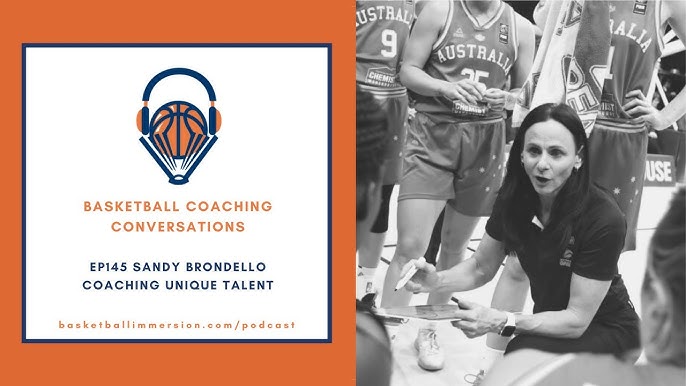 “I’m big offensively on ball [and] player movement and getting everybody involved . . understanding that obviously the best players, I want the ball in their hands . . when we need to make a play, but everybody’s important to making it happen.”

“It’s putting her [a dominant player] in positions where there’s more one on one coverage, or if they are bringing a trap, how do we exploit that in overload situations, getting three players on one side?  I think the best way to do that is a lot of movement, and sometimes you call it false movement. And it’s about just getting placed in the right position so you can get a high quality shot every single possession.”

“I do like to put some down screen action in between BG [Britney Griner] and Diana [Diana Taurasi], because I think that’s extremely hard to guard when you’ve got a great shooter and also a great passer that reads defenses well and can make the decision whether she’s open to shoot the ball . . or pass it on the roll to the basket and get an easy one where the defense is not set and they can bring a trap.”

“Being a former player . . you liked it when you’re in a situation when you knew the coach believed in you, gave you the confidence to play your game, and didn’t put you in a box.”

“I encourage all coaches, before going into a season, to establish the culture that you want. And that’s  really driven by the players. And that’s what I try to do in conversations leading into the season or in training camp is [establish] what we need to do or be to be the most successful team, and accepting roles is one of them.”

“It’s kind of a lost art with post passing . . we force the action a little bit where we kind of should be moving it . . it’s way more attractive when you’re moving the ball.”

“One-on-one defense is important, but it’s not the most important thing . . I always talk about team defense . . it’s really a five-player defense where all the pieces have to work together to be most effective.”

“I never want stationary defenders, I want to make sure they’re on their toes, they’re moving, they’re stunting quick,  they’re recovering quick . . knowing that it is team defense, so if you get broken down, someone’s going to be there for you . . It’s having that sense of urgency.”

“I use a lot of three on three to start [building a defense], just working on the tagging and the positioning and building it up. In a soft hedge, this is how we’re doing it and being at the point of the screen and on drop getting through screens, positioning on and off the ball.”

“Talking builds trust. And without trust, you don’t have anything, especially if you’re on the ball. You’re going to work extremely hard if you can hear people telling you you got help this way . . it can build confidence in you, you may not be the best defender on the ball, but you know that your team is there behind you.”

“I try to stay out of scramble, but obviously with the talent pool that we have [in the WNBA], you’re going to be in scramble. . but really on a scramble, we’re trying to make sure we push it back to where the ball came from.”

“Analytics definitely plays a part in my preparation about what I want to stop but I still want to be consistent with how I want to play . . we make tweaks, depending on the opponent that we’re playing that day.”