In this week’s basketball coaching conversation, Memphis University head coach Katrina Merriweather joins the Basketball Podcast to discuss how to build a successful program and the importance of player and coach relationships.

Katrina Merriweather was previously the head coach of the Women’s team at Wright State. She took over in the Spring of 2016 and has guided the Raiders to over 100 wins in her few years at the helm. During these four seasons, she has coached her team to two WNIT appearances, two regular-season conference championships, one NCAA Tournament berth, and earned votes to be a Top 25 ranked team. Katrina also earned the honor of Horizon League Coach of the Year in 2017 and 2019 for her outstanding coaching performance at Wright State.

After college graduation Katrina helped build a pipeline of women’s basketball talent while coaching in the AAU circuit in her hometown of Indianapolis. While coaching AAU she helped guide and mentor several All-American high school players and current WNBA players. Kristina also is a devoted member of her community and has won the pristine John Wooden Citizenship award due to her community service.

Throughout Katrina Merriweather’s career, she has proved to be a phenomenal leader on and off the court. Coach Merriweather recently began her 5th season with Wright State and looks to make a run in the NCAA Tournament. 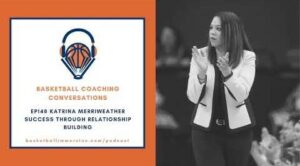 “We have five pillars in our program, and they are trust, respect, accountability, commitment, and ethics. That is what guides us in building relationships in a Two way manner . . this generation has so much information at their fingertips with all the technology . . They have to believe that even when you’re hard on them . . you have their best interests at heart.”

“I need you [the player] to understand why I’m so frustrated. And it’s because the expectation for you is higher than what you’re doing. I think if they realize that when you communicate with them, you just want them to be the best version of themselves, then they can take any criticism that you give them.”

“I give our kids a lot of information in the beginning, which is like this blueprint for how this program is run and the best way that you can excel in this program . . And we have to understand that we have to meet kids where they are.”

“You have to do well in school to play basketball, and more importantly, you may not understand the importance of a degree, but I do so you don’t have a choice but to do this. And not just get through it or get by, you have to figure out how to do it the best way that you can, because we’re trying to develop habits that are lifelong habits. And working hard is just one of them.”

“So we’re trying to figure out how . . to help you make this the best four years that it can possibly be. And the only way I know how to do that is with love and compassion and empathy, and serving them and not feeling like they owe me or us or the program anything.”

“I tell them during the process, I say, ‘Listen, you like me now. But that’s because I’m not responsible for holding you accountable for anything. The minute that you get to Wright State and I have to hold you accountable for these things, you’re not going to like me some days, you’re not always going to agree with me.’  And I tell them, that’s why we have five other people for you to talk to – the odds of you being mad at all six of us the same day are very slim.”

“So we have to get to a place where they know that I care about all the [personal] stuff, but I still expect them to be excellent. And that, to me, is the biggest balance for them to know those two things.”

“These times are very, very sensitive, because it’s really important that everyone feels respected.”

“I think that our kids are more conscious of the importance of their words . . we read The Four Agreements, and one of them is be impeccable with your word. And understanding how what comes out of your mouth, can really have a lifelong effect on someone that you care about. My mother’s always said, ‘A moment on the lips can be a lifetime on the heart.’”

“We have a very safe place where people say what they want to say, but we are careful in how we communicate. And if anything gets a little hairy, we just stay there until we knock it out and we get back on the same page again. I think that that’s just the best way to handle it is with transparency and in everyone feeling like they won’t be judged for what they say.”

“We don’t always have easy conversations. I think it’s important that they learn how to express themselves, but also defend what they feel is right and what they’re passionate about.”

“Where we are now is, if we can teach you how to manage your time and we can teach you about how to get your priorities straight, then basketball is easy and fun because you’re already good enough to be here.”

“When you have responsibility and accountability in a situation, it also keeps you in a space where you feel empowered, instead of hopeless, and or a victim.”

“I think that’s sometimes where coaches get themselves into trouble is they’re very reactive to what’s going on. And you’ve just got to learn how to take a deep breath and say, ‘What is my responsibility in this situation?’ And again, that’s not just a basketball thing for me.”

The Four Agreements: A Practical Guide to Personal Freedom

Tell your friends about us.
Give us a shout out on social media.
Give us a five star review wherever you listen to podcasts.