In this week’s basketball coaching conversation, Melbourne United head coach Dean Vickerman joins the Basketball Podcast to discuss how coaches can impact the game and his open coaching style.

Coach Vickerman took over as head coach for Melbourne United of the NBL in 2017. During his first season, Dean Vickerman started an ambitious overhaul of the team’s roster and culture. His hard work immediately began to pay off as Melbourne United went 20-8 and won the NBL championship. Dean has continued his success with United by leading them to the postseason each year and earning another Finals appearance in 2019. Vickerman credits his success to his ability to thrive in the personal and relationship side of the game. Some of his greatest strengths as a coach are communication, building chemistry, and creating community ties.

Before coaching at Melbourne, Vickerman had tremendous success as a coach for the New Zealand Breakers. He started as an assistant with the club in 2007. Throughout his time he made a great impact on the team and was crucial to the team’s championship dynasty. The Breakers took home championship hardware three consecutive years during 2010-2012. Finally, in 2013 Vickerman was promoted to head coach. During his three seasons at the helm, he earned two Finals appearances and one NBL Championship. Dean also earned Coach of the Years honors twice during this run.

Dean Vickerman also played basketball professionally with the Melbourne Tigers from 1997-2001. Coach Vickerman has always been connected to his community and the thought of coaching in his home state of Victoria has been a long-time dream for Dean. After getting the job at Melbourne United Dean immediately began pouring resources into the youth program and plans to target homegrown talent for his team. In just a few years United has made great strides in player development and has gained more local support.

Dean has over 20 years of experience in the NBL has shown the ability to thrive in each role. Vickerman recently began his 4th season in Melbourne with aspirations of taking home the NBL Championship once again. 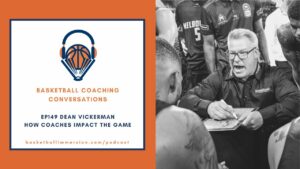 “Being a program that likes to get our defensive drills in early, we look at what are the things that make a practice effective when we start with those defensive drills and using your voice is certainly a major contributor to a good defensive practice.”

“We’re doing a better job of it [giving players a more active role] in our program . . our assistant coaches say, ‘Don’t step into that huddle right now.’  You know, let the players make those decisions. Be around the huddle, but let them absolutely lead it.”

“You’ve got to challenge yourself with how you advance your leadership. And a big part of that leadership is how players communicate with each other.”

“Like any team, you’re trying to create a buy in early on, about the identity of your team. And so they set out a process that was with a facilitator that really drove the teams to talk about what are the values that are most important to this team, to win, and to be successful.”

“Can you evaluate your practice? We pick three at different times . .  Did you have physicality in practice? Did you make someone else better? And did you execute? That’s a simple three tick method that players will have a conversation with each other, evaluate another person or evaluate themselves after practice.”

“As a coach, we’ll ask . . ‘What was the best thing that a player did related to our trademark [values]?  What’s the one thing that they need to continue to get better at?’ So, they’re getting that positive and they’re also getting that reinforcement to say this is an area that we think, if you improve, is really going to help our team.”

“Values you have for your trademark have to be lived for your culture to be strong.”

“You want to build great people. The method that we use is to have a value based program that, if you live it, some good things are gonna happen to you.”

“We’ve asked that question of everybody within our program, how they learn best, but we continue to hit all the forms. We show video, we give the scouting report, we go through the walkthrough, we follow up, we try to do everything to allow a player to be in the best position.”

“We’ll have our forwards and centers and our guards have a little meeting at halftime just to create conversation, and try and solve some of those [in-game] problems. One of the first things [I ask] when I walk into the locker room is, ‘Alright, what have you solved?’ If they’re the same things that we’re speaking about as coaches, fantastic. Is there anything else that I need to add from the coaches meeting to them?”

“As I walk into that [timeout] huddle, what are the two most important things that I need to tell the group and how can I do it in the quickest manner? I make sure that there’s clarity as we move out of a timeout.”

“And I think as you get older in coaching, those relationships just become so much more important. And you have to have those tough conversations afterwards about what happened in the heat of battle.”

“There’s kind of 16-17 stoppages [during the game] with free throws and different things that I think you have a chance to bring your point guard over and have a good, 15 or 20 second conversation. What’s relevant to the next play? Was there something that happened defensively, that that we need to change?”

“I think you’ve got a fight for your players at different times. I think it’s important that they feel supported, when they might feel an injustice on the court, that you’ve gone to bat for them. I rarely have had technical fouls. So somewhere over my course of time, I’ve found a balance to get a few warnings every now and again but to not step over the line that will hurt our team.”

“So, I think [foul trouble] is total learning [experience] and something that I like to ask players as well. Just talk to me, tell me honestly, if you pick up three fouls in the first half, what are we going to do with you? And in the third quarter,  when do we bring you back? . . It has to be that element that you’ve tried to really trust that they can play the right way with foul trouble.”