Coach Stojakovic has been with the Denver Nuggets for eight years and has recently been promoted to director of player development. This comes after the Nugget’s success over the past two seasons despite being one of the youngest teams in the league. During that time the Nuggets went to the conference semifinals and the conference finals in a stacked western conference. Stojakovic also has been influential in the player development of young stars like Nikola Jokic, Michael Porter Jr, and Jamal Murray.

Along with skill development, Ognjen thrives in developing his players to have a high basketball IQ. Before being the director of player development he was an assistant and a video coordinator with the Nuggets. During 2013-2018 Ognjen Stojakovic got a feel for the NBA game, learned what skills were needed, and what opportunities there were to give Denver an edge on the competition. All of these were things Stojakovic applied to his coaching and made a winning impact on the team. Before the NBA, Ognjen was a youth coach with FMP a club team in Belgrade, Serbia. Ognjen Stojakovic has played a major role in growing the sport in Serbia.

Today basketball is a part of Serbian culture and the nation frequently has success in basketball around the globe. Serbia is currently a pipeline for NBA talent with players like Nemanja Bjelica, Boban Marjanovic, and Bogdan Bogdanovic. Stojakovic’s Serbian roots helped get his name out for the Nuggets job. He shares the same nationality as Nikola Jokic and Nuggets head coach Mike Malone has coached and consulted for the Serbian National team. Stojakovic has proven to be an excellent teacher of the game across the globe. Ognjen is in midst of his 8th season with Denver and will continue to display that Nuggets has one of the brightest futures in the league. 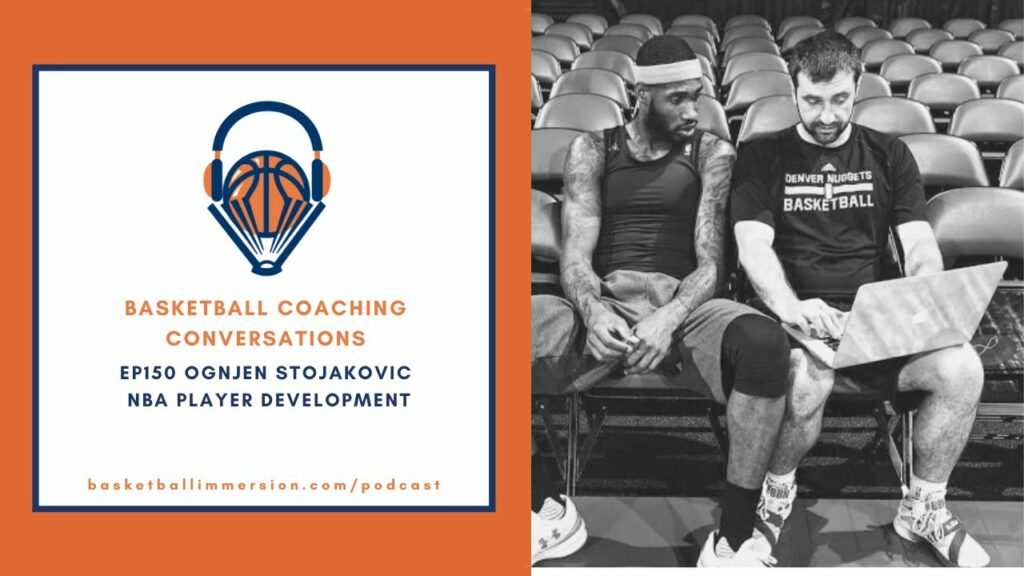 “My main job is to work out NBA players . .  to help our organization, to increase their talent, and to help players be better.”

“The most NBA players outside of the NBA are coming from the Yugoslavian basketball school. I think that that’s something which is very impressive.”

“In youth basketball, I’m talking like until age of 14, 15, or 16, you cannot make on-ball screens, which means that you need to play a passing game; that type of basketball allows each and every player to play each and every position.”

“I think a wide basketball base is key [to player development].”

“In development, . . you need to connect those two things: individual skills with that individual tactic.”

“Almost everyone is doing great . .  doing fancy dribbling and so on, but the skill that I think is very underrated . . is basketball IQ or basketball reads. So that’s something that we should emphasize [and spend] a lot of time to develop.”

“Your practices should involve a lot of those live games like two-on-one, . .  three-on-two, three-on-two plus one, four-on-three, and so on. Why? Because you’re in a situation that you need to make a read . . find the open man. [You need to find] the most efficient way for the team to win the game.  It’s not about your personal skills because you already have an advantage . . now, give me the best solution in that particular moment.”

“Cooperation [among teammates is important] . . and the second thing which is very important is anticipation. Every time you need to anticipate . . if you anticipate you’re faster than if you just react.”

“The best practice is a game. So, what do we want to do when we have our own practices or workouts? We want to copy things from the game and try to make it more demanding.”

“For the young players, usually, you need to figure out what are the things that are going to keep them on the floor.  Plus, you always need to keep in mind where that guy will be two years from now.”

“Our job as coaches and people who are working in the sport is to help those guys to reach their full potential. And in order to do that, we need to get them to know them and to build their trust.”

Ognjen Selected Links from the Podcast: