Neno Ginzburg has been at the helm of the Czech National team since 2013. Neno Ginzburg has made the national team a consistent European contender, something the Czech Republic struggled to do throughout their history. In his first year in 2013, he led the team to a EuroBasket qualification and took 14th place in the competition. He has qualified for each EuroBasket since and even took 7th place in 2015. Most notable, Neno Ginzburg had a phenomenal campaign with the Czech team in the 2019 FIBA Basketball World Cup. During this competition, the team exceed all expectations and took 6th place in the tournament. They finished one place higher than team USA.

Neno Ginzburg also has had a decorated career coaching in club basketball. Ginzburg got his first head coaching job with Bnei Herzliya in the Israeli Super League. He had success for a few years there and later earned a job as an assistant with CEZ Nymburk in the Czech National League. Neno Ginzburg thrived in this role and helped the team to multiple domestic championships and success in Europe. After a few seasons, Neno Ginzburg was promoted to head coach and continued to make the club a powerhouse in the Czech League. Throughout his 12 years with CEZ Nymburk he won 12 Czech National League championships and won the Czech Cup 9 times.

His success with the players and in the Czech league made him a perfect candidate for the National team job. Since coaching in the Czech Republic Neno has increased the amount of support and interest in the sport. The Czech Republic has had its most success internationally in recent years and even produced NBA talents like Tomas Satoransky and Jan Vesely. The nation has been so appreciative of Ginzburg’s efforts on and off the court they granted him Czech citizenship in 2020. 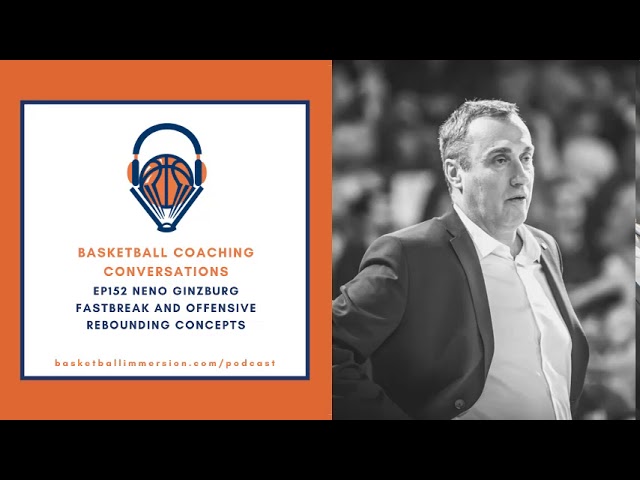 “When you succeed, you’re looking at a lot of parameters, but I think the first parameter is the character of the players . . second, we are a very disciplined team.”

“[When you coach] a national team, you can’t take a long time [to do things] because you’re only together for 30-45 days, so you need to bring a good atmosphere to the team, you need to solve problems immediately and not wait for the next game or the next week.”

“I can take him [a player] aside for a meeting and explain,  ‘Listen, we don’t have time now to argue about this. We need to solve it. Either I will solve it or together we will solve it.’”

“After we get the rebound, we call it push, push, push; you’re in a sprint now. First of all, we want to fill the corners and really insist that you will be on the corner and not one meter or two meters before . . the pick and roll is the last option.”

“With junior [players]the practice started after a little bit of a warm up and this the practice was at a really high tempo. Every set, every practice drill, we make it with tempo because we want them to start thinking fast . . it’s a lot of turnovers in the beginning but they start to get used to it – to think fast, to react quick. And then the turnovers are reduced.”

“If you have an open look at the basket on the fast break, we want you to take it.  If it’s penetration,  if it’s a three point you need to take it, even if you are not a great shooter. A shot with someone in your face, you can take this shot later; the open shot, you’re not sure that you will get it later.”

“Our big men, when they run, if they are in front of the ball and we didn’t score [off the initial action], I’m not allowing them to come back to pick and roll..The second big man can come to pick and roll.”

“This is another point that we insist with our players:  we don’t want you to walk to the pick and roll . . you need to come with high tempo to the pick and roll. And sometimes you don’t need to pick, you just need to slip to be enough for the ball handler or you [to create an advantage].”

“Sometimes you need to listen to your players and sometimes they know better than you, especially what is good for them . . I try to be smart, not right, understand?”

“if we take the rebound the second rule is if you have a good shot take it; if not, we have a system that everybody opens [to the three point line] and then we take advantage.”