In this week’s basketball coaching conversation, international best-selling author, Doug Lemov joins the Basketball Podcast to discuss The Coach’s Guide to Teaching. Lemov shares how the science of classroom teaching applies to the sports coaching world.

Lemov played soccer at Hamilton College, where he was the worst player of the decade, but has still managed to combine his interest in teaching with his love for sports by working with various sports federations and professional franchises to improve their coaching. His new book The Coach’s Guide to Teaching describes much of what he learned from those experiences. Doug Lemov also has obtained an MA in English from Indiana University and an MBA from the Harvard Business School. 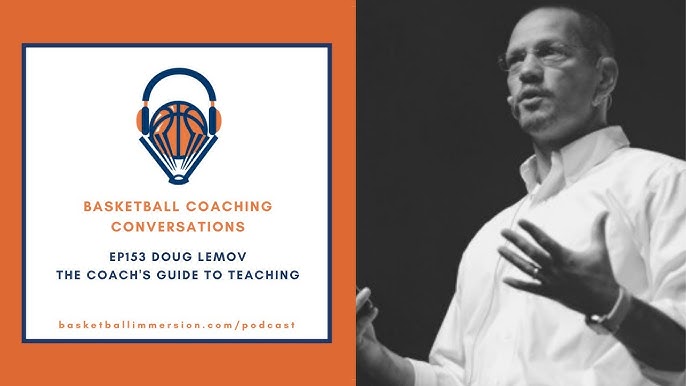 “One of the key things that has to happen for someone to make the right decision is their eyes have to be in the right place, they should be looking at the right things and looking for the right things. And that’s true with any decision, but especially in a sport like basketball where decisions happen fast.”

“[When] players are lined up doing drills, one of the gaps there is that they’re not really perceiving the cues and the settings that they would see in the game.”

“The name for this concept is a ‘quiet eye’ and it shows up in basketball . . when they put eye tracking glasses on expert performers, their eyes are quieter, they move less, they rest. They know where the signal is and their eyes rest at the signal, and they ignore the noise. So much of their expertise starts with, essentially, I know what to look at.”

“The visual field is full of signal and noise. The mark of his [LeBron James’] expertise . . is that he’s looking at and paying attention to the signal, and maybe a lesser player is more distracted by noise.”

“Attention is one of the least understood and most important aspects of learning. And attention is as much about what you tune out as what you tune in. And so when you’re looking fixedly in the right place, you’re also not causing yourself to try to react to or to take in and process extraneous details.”

“How do you encode the habits that are in your long term memory that show up when you have to make fast decisions? Well, I think that’s where problem solving comes in. So I’d want . . a significant amount of problem solving in a training environment.”

“I know that I want my players to hustle, practice and that if they play hard, they will learn more, but they also need to be mentally, cognitively engaged.”

“I want to keep a sense of constant challenge, and really build . . a habit for players of constantly being intellectually on as soon as they walk onto the court . . you expect the game to ask questions of you, and you’re always ready to answer them.”

“I call that culture of error. And I think it’s more than just okay. I think I have to communicate, it’s a good thing. My favorite phrase comes from a math teacher, ‘I’m so glad I saw that mistake, it’s going to help me to help you.’ And then even another way of thinking about this in a basketball practice is, ‘I’m so glad we made that mistake today, because I don’t want to make it on Saturday, right?’ So if we make it today, we can study it, and we can fix it. And that’s a good thing.”

“One of the really simple and mundane things in the book that I really believe in is . . just to think about observation as a form of data. And if it’s a form of data, I’ve got to track it, and write it down . . Just having a clipboard and writing it down and taking notes and tracking. Here are the errors that I’m seeing . . here’s what excellence looks like when we’re doing this drill, here are the five things I want to see players do.”

“If I want to keep a sense of flow in my practice, I can only talk so much. If I’m talking too much, players aren’t playing. So, I’ve got to be quick with my feedback.”

“We think more information often is better. But extraneous information is not a good thing. Not only does it fill working memory with less valuable things. But it erodes the importance of words.”

“We want to socialize attentiveness and focus in our players whenever we can.”

“I think one of the first things I would do as a club is to have a vocabulary list . . These are the most important things we want words for. These are the words that we’re going to use to describe those things so that we’re consistent. So we’re all talking the same language. And then make sure that the kids know what these words mean, maybe with video, maybe with definitions, with lots of examples.”

“The first thing you need to know about retrieval practice is that the best time to remember something is when you began to forget it, that’s when you have to work to remember it . . but one of the other things that we can do is we can simulate the role of forgetting or basically accelerate forgetting by causing people to concentrate on something else.”

“Blocked practice is doing something over and over and over again, for a sustained period of time, without a break. It can be useful in teaching something until a skill is stable; its challenge is that it looks more successful than it is because players improve their performance rapidly in practice, but they also forget quickly afterwards . . I certainly think that people are drawn towards blocked practice, and it’s a little bit of a false god.”

“People think that positive reinforcement is primarily a tool to make people feel good. And it’s nice that it does that. But the most powerful thing about positive reinforcement is it tells players what to replicate. Players get it right all the time in practice and then fail to continue doing it because they don’t know that they just got it right.”

“I was talking earlier about how often I think players practice ignoring coaches. I think a lot of it is because we’re not intentional enough about what we talk about and why. We make our words redundant, we don’t show that our words matter. And if it doesn’t matter to us, it’s not gonna matter to players.”

“I love your phrase ‘progression from structured to unstructured’ because it presumes that you know background knowledge influences how you play in an unstructured environment and that novices learn differently from experts.”

“The difference between the activity that I’m using and my learning goal is important to distinguish because people conflate the two all the time . .  ‘We’re going to play 5v5.’ What is your purpose of the 5v5? It could be different from tomorrow . . we ask coaches to narrate what they’re doing, they’ll often tell you the setting of the activity and not the purpose of the activity. And I think it’s important to be clear about purpose if we want to maximize learning.”

The Coach’s Guide to Teaching