Prior to Catholic High School, Coach Cascio became the youngest coach in the history of Louisiana to win a State Championship when he led Christian Life Academy to a 2012 Title. His tenure at CLA also included another Final Four Appearance and back-to-back-to-back district championships. Prior
to become a head high school coach, he served at the youth, high school, and AAU levels.
Over the years, Coach Cascio’s success and style of play garnered attention from coaches at all levels. As he began to network with coaches around the country, he became passionate about sharing the game. He now provides modern mentorship for modern basketball through his business, Courtside Consulting. In the last year, Coach Cascio has conducted hundreds of webinars and traveled the country leading clinics for coaching staffs ranging from Professional to High School levels. 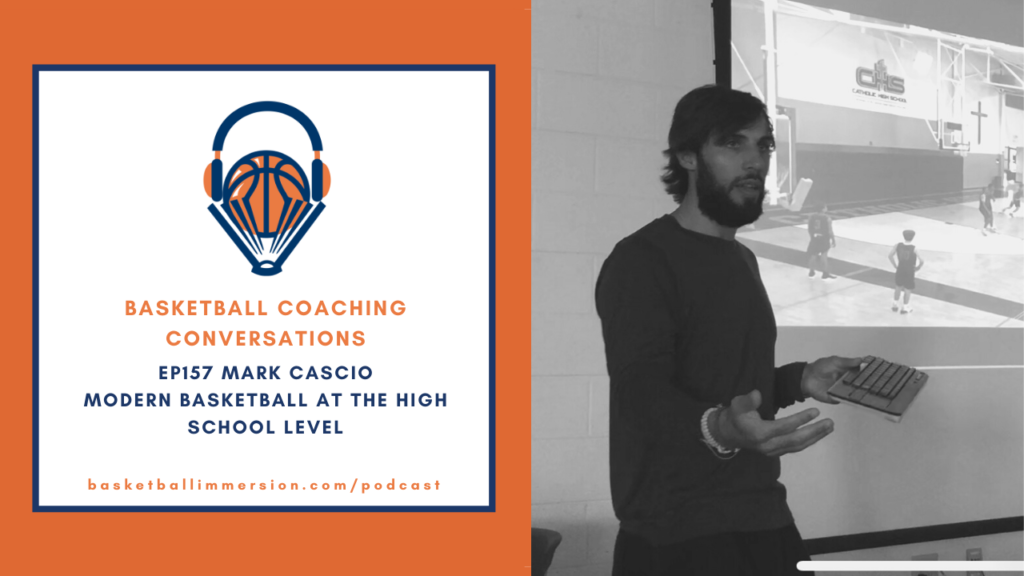 “We want to put a lot of focus on player and skill development so we have an emphasis on players instead of plays.”

“Modern basketball is more about spacing the floor and ball movement on the offensive end . . zero second decision making, teaching much more or thinking much more in terms of advantages rather than just shots or running offense.”

“What we’re providing players is a framework that they can play out of. If you don’t have enough structure players feel it; they’re on an island. And then if you have too much structure; players feel a little handcuffed. So we’re trying to find that middle ground. And teaching some concepts and teaching players how to play is the glue that kind of holds everything together.”

“The more I looked into it, it just made sense to make all the action on the ball. So we’re putting pressure on the rim off the drive. And then that cues all the action around it.”

“From day one, when you step foot on our campus, you’re going to shoot a lot of threes. So, by the time you’re in the program for a couple years, shooting threes is just part of your DNA. And when we miss threes . . it doesn’t define whether that was a good shot or not.”

“We define shots by big advantage, small advantage, or neutral because really in the phase of the possession your art as a team, you’re always in that phase if you’re neutral, neither offense or defense has an advantage. We’re all about gaining small advantages and turning that into a big advantage shot.”

“If I drive and I draw help, and a secondary defender comes and cuts off my drive, we should have an open player but really only if we’re spaced well. If I kick it to that open player and they put the ball above their head and freeze with indecision, we’ve lost the advantage.”

“The defensive part is a huge part of modern basketball . . having the same rules for offense and defense, but they’re just the inverse . . the goal of help defense is to force a pass, right? So what we’ve talked about on offense is, if you see a chest in front of you, you should pass, so it’s the same concept. But now, through a games-based approach, we can train both sides of the ball, where we’re not doing 10 minutes of offense, 10 minutes of defense . . we have gotten so much value in our practices from teaching both sides of the ball with the same teaching point.”

“We try to make it more about the players . . we feel if our guys enjoy showing up every day, because they’re going to get to play a lot of basketball . . they’re gonna fall in love with the game. And if you have a player who loves it and they want to be in the gym and they want to learn, I think you’ll win more games . .  it’s just a lot more fun for everybody.”

“We try to arrive with some pace. It doesn’t have to be breakneck speed; it doesn’t have to be reckless. But if we can arrive two to three seconds earlier, we’re putting that much more pressure on you and as those possessions stack up, we can see teams start to wear down mentally and physically in the second half.”

“Protection plans are . . a plan B for a player . . to give them some options, if they can’t create an advantage or they just don’t create an advantage in a particular situation . . it’s kind of evolved into playing off two feet when there’s bodies in front of us . . we find that everything slows down when you have these plan Bs where, just because you’re attacking hard, it doesn’t mean that you have to make a really fast decision once you get inside the three point line.”

“The thing that really stood out for us [having protection plans] is we take far better shots in the paint and it  leads to a lot of open threes.”

“That’s what all the decision making stuff is about, it’s really just punishing the defense by finding solutions.”

“We’re always reinforcing the basics. It’s not like we’ve ever mastered footwork, there’s always something you can add to it. You’ve never mastered shooting or passing there are just different levels of expertise that we can bring to it.”

“We tell our guys, ‘A pivot should be like a screen for yourself.’ If you’re not pivoting to score, you should be pivoting to increase your vision and get better position on your defender.”

“Arriving with some pace and playing in the full court can benefit you when you’re not as athletic because. . we can get an advantage and our program on and off the floor has become about creating advantages . . it doesn’t matter who we’re playing against the game is in our favor because that’s how we practice, that’s how our players are comfortable, that’s the environment that we’re used to training in.”

“If your practice isn’t hard enough to where you’re getting in shape then I think you need to reevaluate your practices . .  more time on task,  alternating hard drills with some drills that are maybe in the half court . .  every coach wants to start the game fast . .  your practices should start fast, too . . that way when you go to the gym every day you’re used to getting yourself going and starting fast right away. Our practice philosophy is we’re going to start fast, we’re gonna play really hard, really intense for as long as we can. Then we’re done, we’ve had a great practice, we’ve competed and we can go home and get ready for another day.”

“If I’m in practice, I’m looking for the good . . If we’re playing five on five and the defense is working on their press and offense is turning the ball over every possession, I could get really mad at the offense or I could be really fired up for our defense, both are going to send the same message.”