He comes to UNM after an eight-year stint at the University of Minnesota, where he went 141-123 with two NCAA Tournament berths and an NIT Championship. His first season at the helm of the Golden Gophers saw Minnesota go 25-13, setting a school record for wins as Minnesota won the second NIT Championship in school history. At Florida International, Pitino led the program to its first winning season in 12 years and a 10 win improvement from the previous year.

Pitino’s success isn’t just as a head coach, as he has been a part of several deep NCAA Tournament runs as an assistant and as an associate head coach. He spent two separate stints at Louisville coaching alongside his Hall of Fame father Rick Pitino. In 2011-12 as associate head coach, the Cardinals went 30-10, advancing all the way to the Final Four. That team along the way scored a 59-56 win in Portland over New Mexico in the NCAA Tournament, paving the way for the Cardinals to make it to the Sweet 16. From there, Louisville defeated No. 5 Michigan State and No. 25 Florida before losing in the Final Four to No. 1 Kentucky.

Between Louisville stops, Pitino spent two seasons at Florida coaching under Billy Donovan. In his first season with Florida, the Gators went 21-13 overall, making it to the NCAA Tournament as a 10-seed where they would lose 99-92 in double overtime to BYU. That team climbed as high as No. 10 in the polls. The following season in 2009-10, Florida won the SEC regular season championship and went 29-8 overall, advancing the Elite Eight, losing to a Cinderella Butler squad 74-71 in overtime. Pitino has also had assistant coaching stops at Duquesne, Northeastern and the College of Charleston. 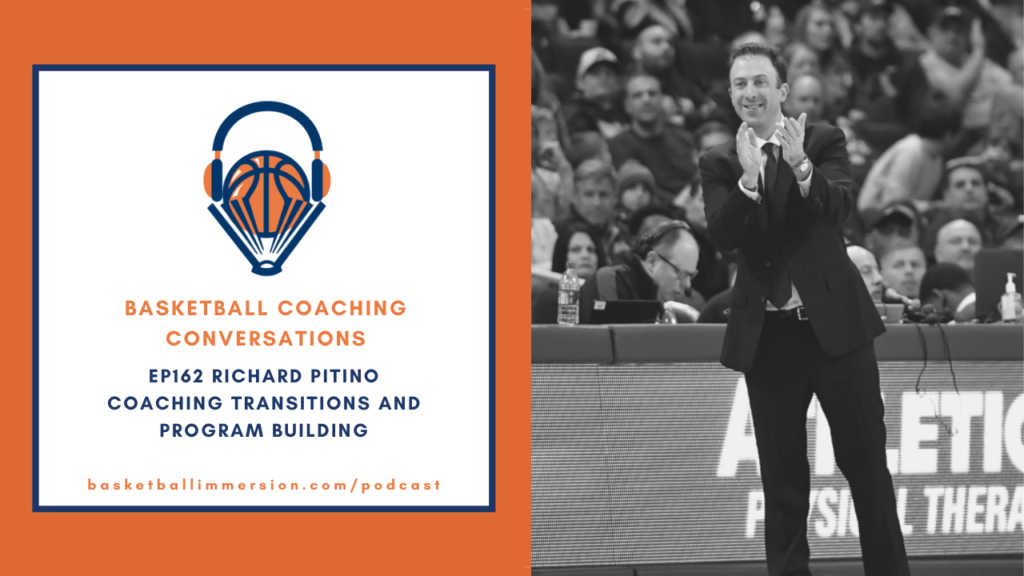 “The most important assets . . are your current players, because we get consumed with recruiting . . pour your heart and soul into the players to make sure that they’re in alignment with what it is that you’re trying to do so.”

“You want to give them [assistant coaches] freedom but you’ve got to be crystal clear as to what it is that the standard is in the program so there’s no gray area.”

“After nine years of being a head coach, it’s so much less about the out of bounds plays, and the pick and roll defense, and so much more about culture building and things like that . . just being dialed into that every single day is very, very important.”

“The most important thing is those two hours a day when you’re on the practice court, you get that right.”

“I’m very, very confident in what I’m doing. But a lot of that has to do with just being prepared on a daily basis and understanding that there’s always going to be elements that are out of your control in this profession. If you made a mistake, own it, move on, don’t beat yourself up about it.”

“Evert A.D. does the same thing. They have their people that they call and if your resume and your character checks out, you’ve got a chance. If it doesn’t, you’ve got no chance . . Your reputation is very, very important . . and that’s why it’s so important to go work for good people.”

“Every single day, you competed your butt off . . that’s something we’re working really, really hard to develop, that culture of competitiveness . . regardless of how we’re guarding things or what we’re doing.”

“From the defensive side of it, it’s not about zone, it’s not about man . . when it comes to defense, do your job on the ball. The on-the-ball is the most important thing. I don’t care what you’re doing.”

“Whatever it is that you’re going to work on doing, I would say have a base and then a counter to that base because you will need to adjust . . , look at what you’ve done and you hate going against.”

“We’re going to play 31 games. The most important thing is, whatever decisions that we make impact winning in those 31 games. That doesn’t mean that winning is all that matters but let’s make sure that we put this team in a position to succeed.”

“[On coaching] Just embrace it, love it. It’s a fun ride. It’s better than a real job. And enjoy every second of it because you just never know what the future holds . . make the best of the opportunities you have and keep pushing to get better every day.”

Richard Pitino Links from the Podcast: