In this week’s coaching conversation, Charlotte Hornets assistant coach Ronald Nored joins the podcast to how coaching players as if they’re all NBA players can improve our approach and impact.

Ronald Nored is in his third season as assistant coach for the Hornets. Nored brings four years of NBA experience to the Charlotte Hornets, most recently serving as head coach of the Long Island Nets, the NBA G League affiliate of the Brooklyn Nets, for two seasons.

After his four-year playing career at Butler University ended in 2012, Nored spent one season as a high school coach in Indiana before becoming an assistant coach with the Maine Red Claws, the G League affiliate of the Boston Celtics, in 2013-14. One year later he moved to the Celtics as a player development coach alongside his college coach, Brad Stevens. He then served as an assistant coach at the University of Northern Kentucky in 2015-16 before returning to the G League as head coach of the Long Island Nets.

As a player for Butler University, Nored was a member of the team that reached back-to-back National Championship Games in 2010 and 2011. At the conclusion of his collegiate career, Nored, a two-time Horizon League Defensive Player of the Year, held the school record for games played (143), was tied for the all-time lead in steals (207) and ranked second on the program’s all-time assists chart (497).

Nored and his wife, Danielle, welcomed their daughter Avery in February of 2018 and their son Kai in December of 2020. 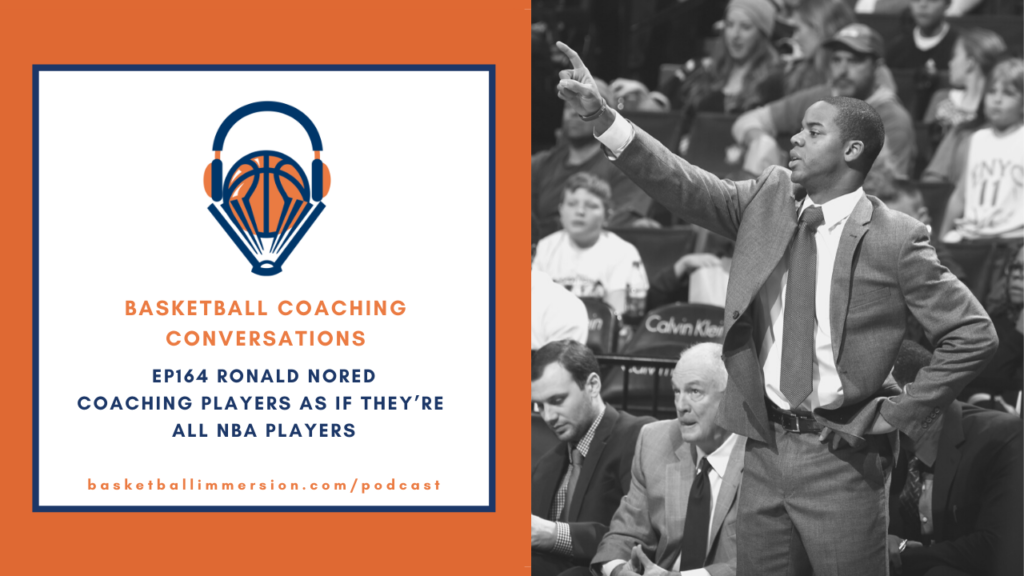 “The amount of information that’s out there that players at all levels, high school, college, G-League . . have gives them a different base to where we have to dive in to get to know them.”

“What I’ve observed is those [coaches] that are not authentic, aren’t real, don’t develop great relationships, don’t keep their word to the players, don’t do everything they can for the players . . the players just move on from them.”

“I love to learn, I think learning is the foundation for growth.”

“To have that emotional intelligence to say . . I need to give the player some space, I think is a really important attribute to have. And the other thing is to surround yourself with coaches and be on a staff where coaches are going to tell you the truth.”

“Tracking and getting feedback from the players are two ways that I’ve used to watch [player development] progress over time.”

“If we’re trying to change something, it probably won’t look great in the beginning. Being able to trust the process and continue to work the details is important; getting feedback of how they’re feeling through the process is important.”

“We have to have those [three] attributes with all players . . the humility to understand it’s not about you, building a great relationship with players, and having an idea and a pulse of the content [know what you’re talking about with systems, strategies, and tactics].”

“For young coaches not to know something, it’s okay. Let the player know, ‘I think it’s this, I don’t know, I’m gonna find out, I’m gonna get back to you as soon as I can.’ Players really respect that.”

“The people who work with you every day are the ones that can tell your future employer . . how much of a joy you were to work around and how much work that you put in. No one else can do that. And so if you’re great where you are, it’s going to help you in your future opportunities. It’s okay at times to be antsy and to be ambitious, but that can’t take away from the work of where you currently are.”

“The nature of the G league is development is greater than winning. And that gets hard for us super competitors that want to win every game.”

“To get the most satisfaction out of your staff, for them to be excited about coming to work every day . . let’s empower them with great responsibility to do great work for you [as the head coach] and for the players.”

Ronald Nored Links from the Podcast: