In this week’s coaching conversation, Oklahoma State head coach Mike Boynton joins the podcast to share insights on being adaptable in your coaching.

Coach Mike Boynton has built the program over his four seasons leading to an outstanding 2020-21 season where the Cowboys advanced to the finals of the Big 12 Championship, earned a No. 4 seed in the NCAA Tournament and ended the year ranked No. 11 in the Associated Press top-25 – all firsts since 2005. Oklahoma State’s first-round win in the NCAA Tournament was its first since 2009. In four seasons at the helm Boynton has compiled a 72-58 record while leading the Cowboys to 17 wins over ranked opponents, including 10 victories over top-10 squads.

In four seasons at the helm Boynton has compiled a 72-58 record while leading the Cowboys to 17 wins over ranked opponents, including 10 victories over top-10 squads. He also hauled in back-to-back top-25 recruiting classes, mentored eight All-Big 12 Conference selections and 11 Academic All-Big 12 team honorees.

Mike Boynton’s coaching career began as a graduate manager at Furman in 2004–05. He then moved on to be an assistant coach at Coastal Carolina University from 2005 to 2007 before moving to Wofford College (South Carolina) for the 2007–08 season as associate head coach. Boynton returned to Columbia for the 2008–09 season as an assistant coach and stayed until 2013. Boynton moved with fellow assistant Brad Underwood when the latter became the head coach at Stephen F. Austin State University, commencing with the 2013–14 season. When Underwood accepted the head coaching position at Oklahoma State, Boynton moved to Stillwater, Oklahoma to serve as an assistant coach. 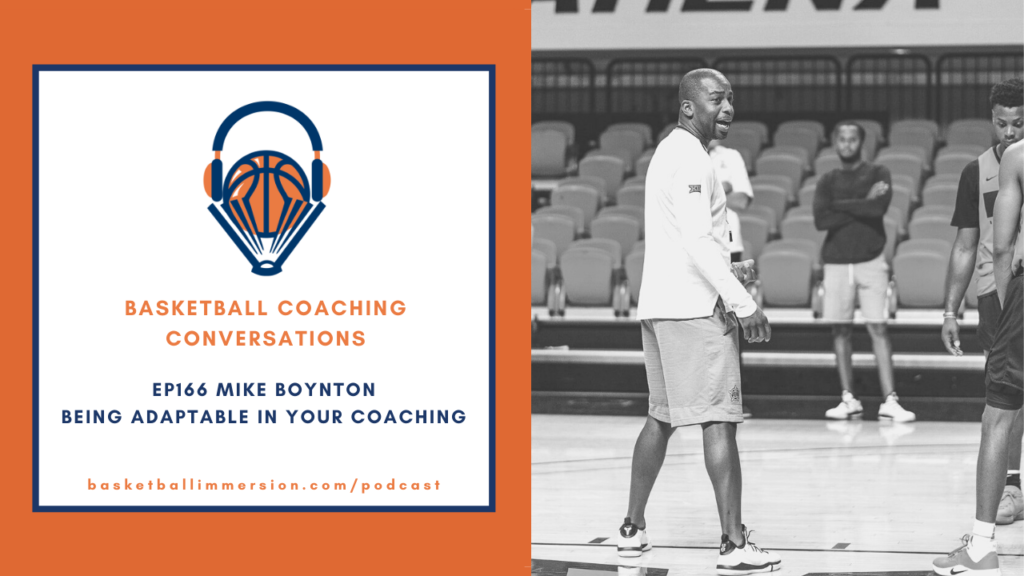 “It’s a phrase, ‘Let’s work’ and it’s about our team and our staff . . it can be very micro in terms of the day to day, practice, film study, weight room, and recruiting calls but it’s also macro in the sense of the big picture, how are we branding ourselves, what type of messaging is out there about the experience that our players are having.”

“And so I think the advantage that I [had] from the beginning . . was, I’m not married to one style, I have an awareness that you can have success [with different styles] and it looks different how you get there.”

“Players are starting to understand the value of being multifaceted and creating more value for themselves by being able to do different things in different spaces of the floor.”

“I’m going to really spend a lot of time this summer focusing on the art of not switching, even when you’re in a switch coverage. Because a lot of times it puts you at a disadvantage unnecessarily.”

“We were getting prepared for the season. I’ve got guys running off pin downs and staggers. And then I look up halfway through the season and, as you study film, we don’t ever shoot those shots in games but those are the shots that we’re practicing. And I’m like, we’re doing this thing backwards, we’ve got to figure out how we’re gonna play and where guys are going to get shots from, and then build practice based on that.”

“That speaks to the evolution of offense and the value of shots. A lot of times, if you’re coming off a stagger, guys are going to shoot a long, mid-range jump shot. And there’s just not enough value there to force your offense to create those types of shots.”

“We thought we were going to be able to shoot the ball from three more consistently. And it just didn’t pan out. So as opposed to staying married to that thought process, we tried to figure out what would serve us best in trying to win.”

“Our guys . . know we’ve got their back, they know we’re looking out for what they see. I pull out guys . .  all the time and I ask them, ‘What do you see? We’ve run this action four or five times, how are they defending it?’ And even on the defensive end, I’ll ask them what’s our best coverage here in this situation?”

“I try to empower them. Because one thing I’ve always believed is the game is about confidence. The most confident players make the most confident plays, and usually have the most success . . I think sometimes that gets misconstrued as you’re not tough on your guys and really, it’s more of empowering them to play with the confidence necessary to have success. This is a highly competitive situation and if guys have doubts, it’s really hard to have success in this game.”

“I think one of the hardest things for a coach to accept is that his initial thought was way off. We want to feel so confident in our ability, I think sometimes it’s not wanting to project on our players that we don’t have the answers. What I’ve always told our guys is, ‘Guys, we’re gonna learn each other as we go through the season . . I’m gonna learn some things about you and myself as we go through the season.’ At the end of the day, the mission is the same . . which is to put our team in the best position to have the most success. That means that what we thought on November may look very different in December, certainly by January or February.”

“I think that’s the part that people miss, even in your most challenging situation, someone’s watching you.”

“There are a few words that I think are pretty undervalued in our vocabulary. One is humility. And another one is self-awareness . . I try to work hard to be authentic, but you can’t be authentic if you don’t know who you are.”

Mike Boynton Links from the Podcast: