Brooke Wyckoff was the Interim Head Coach for the 2020-21 year as Sue Sem Rau took a one year leave of absence. The result was leading Florida State to its eighth consecutive NCAA Tournament appearance and a 4th place finish in the ACC and earned a Top-4 seed despite being picked eighth in the ACC preseason coaches poll. Since the ACC added Louisville in 2014 and set its current group of 15 teams, the 2020-21 Seminoles are the only team in the league to be picked as low as eighth in the ACC preseason coaches poll and finish with a Top-4 seed.

Brooke Wyckoff has sparked the rise of the Florida State women’s basketball program as a standout player, as an assistant coach and as the interim coach. She was a Florida State women’s basketball standout player on the court from 1997 to 2001. She joined Sue Semrau’s revamped staff beginning in the 2011-12 season. Through 10 seasons, Wyckoff’s tremendous results in defensive game planning, coaching the post players, recruiting, scouting and other areas resulted in a reward: Being named the team’s associate head coach on May 1, 2018. In her five seasons of taking over the defense, FSU’s sub-60 points allowed in three of the past six years mark the only three times the program has surrendered less than 60 in a season.

In 2014, Brooke co-founded an organization called Moms in Coaching. This is a support group for mothers who are coaching but are unsure if they can be full-time coaches and full-time moms.

Without a doubt, Brooke Wyckoff was one of the greatest Seminoles ever to wear the Garnet and Gold on the hardwood before playing nine seasons in the WNBA. Wyckoff played in the WNBA from 2001 to 2009, competing for the Orlando Miracle, the Connecticut Sun, and the Chicago Sky. 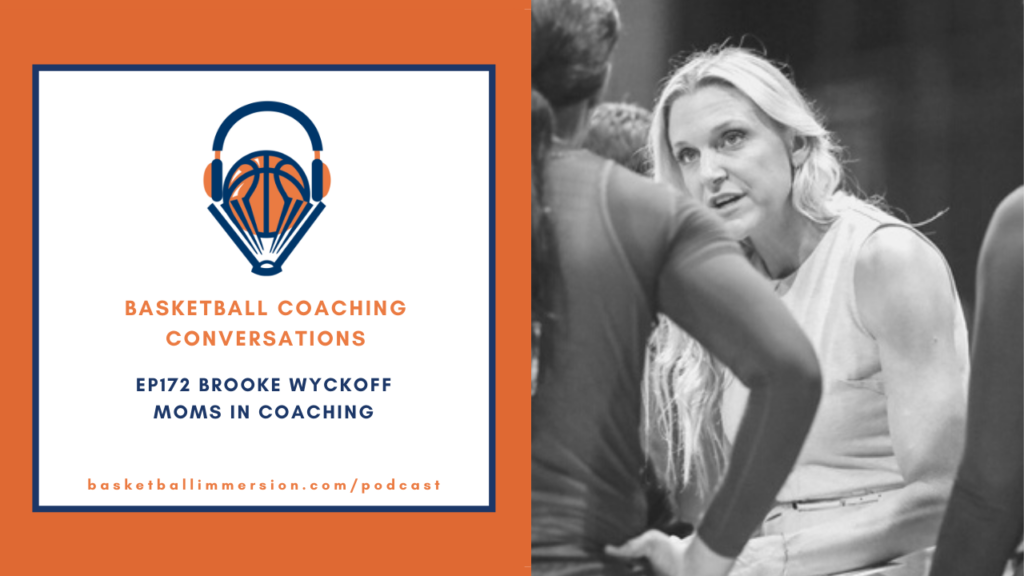 “What is most important is usually not how we’re getting through a screen or how we’re going to attack this defense; it’s how are our players doing? . . What is their mental state? How are we building them as people?”

“Our theme of the year was ‘gratitude’ . . whatever it was that we were able to do . . When you are brought back to gratitude, when you force your mind to think about what I’m thankful for and what’s going on right in this moment . . we can really bring ourselves back to a place of calm, a place of reset, and be able to move forward in a more positive way”

“We have had a lot of success over the years defensively and we usually do what we do . . this year we became more scout-based and tweaked a little bit defensively . . what I learned was that Sue’s passion, her commitment to defense and rebounding . . and getting our players to believe that’s what wins basketball games is everything.”

“She [Sue Semrau] is always questioning, always pushing, always wanting to find the next best way to do [things] . . it really challenges me . . to have evidence to back up why we do what we do.”

“Moms in Coaching . . first and foremost, is a support group . . for mothers who are going through this pretty rigorous lifestyle of coaching . . we’re here to say, ‘There’s lots of us out there, you can do this, and also give practical advice.’ The other side of Moms in Coaching is to be an advocate and a platform to keep women in coaching in general.”

“When they [college players] can see these examples of people being at the top of their field, pursuing an excellent career, but also being able to value family . . then whatever choice they make later on, they’ve seen it done and have that in their minds as representation.”

“We all have to perform on our job, there’s no excuse for not being able to perform, it just looks a little bit different when you have a family, when you have outside obligations . . the way I get things done looks different but I’m still confident that I can get this job done and do it to the best of my ability.”

“I was clamoring to get back to work as soon as I could . . but I wanted to continue breastfeeding and recruiting and being on the road and [being at] hours of practice . . it is difficult to make sure that you can continue that.”

“I’m very grateful that I had a very understanding boss and coach from the beginning. She [Sue Semrau] was more than happy to say, ‘Whatever you need, we want to support you. And we know you can do this.’ It is so important to have that support and encouragement. And again, that doesn’t mean a lowering of expectations of getting the job done, those stay the same. I would argue that knowing that we are getting that support, knowing that there’s people around us to understand what we’re going through, we’re going to work that much harder to keep that standard of excellence or push beyond it. It’s a great motivator.”

“The easiest way to continue to invest in women is to do it with the people that you did coach and to show them that this is a really rewarding profession.”

“When we have both male and female coaches investing in our younger players and bringing that experience, bringing that insight, bringing those different abilities to relate about different things, it makes our world a better place.”

“I want our players, when we’re coaching them, to do things because it’s going to be successful. So, if you can throw a behind the back pass like Trey Young did the other night out of a trap and hit your shooter right in his hands, by all means, do it.”

“If we got . . a wider scale of accommodations, support for families, not just mothers, but families, you’d see a lot more women, I think, being willing to take some jobs.”

Brooke Wyckoff Links from the Podcast:

The Basketball Podcast: EP100 with Jen and Chris Oliver