Kevin McGuff 19-year head coaching career consists of nine years at Xavier University (214-73) and two years at the University of Washington (41-26) before arriving at Ohio State. He holds a .698 overall winning percentage with a career mark of 426-184. His Ohio State teams have broke single season scoring records and went from the #52 scoring offense in first year and #10 in scoring offense in the second year with 5 out offense that we are going to discuss now.

In his first season, McGuff led a relatively young and inexperienced group to a 17-18 record against a schedule strength that consistently ranked in the top 3 throughout the year. In his second season, he guided Ohio State to a 24-11 overall record, a runner-up finish in the Big Ten Tournament and an appearance in the second round of the NCAA Tournament. The Buckeyes took another step towards national prominence in season three as they earned a No. 2 seed and advanced to the Sweet 16 of the NCAA Tournament. The 2016-17 season was yet again, a step in the right direction as the team made it back to the NCAA Sweet 16, marking the first back-to-back trips since 1988 and 1989. The Buckeyes also claimed their 15th Big Ten Regular Season Championship, finishing with a record of 15-1. In 2017-18, McGuff and the Buckeyes won both the Big Ten regular season and tournament titles and hosted first and second round NCAA Tournament games for the second time in four seasons.

Prior to his arrival at Ohio State, McGuff, a Saint Joseph’s College (Ind.) graduate, went 41-26 in two years at Washington with two berths in the WNIT. In his first season McGuff led the Huskies to a 20-14 finish — its first 20-win season since 2003 — and a trip to the quarterfinals of the WNIT. In the WNIT, Washington went on a memorable run, beating Cal Poly, Utah and Oregon State before falling to San Diego in the quarterfinals. It was the first winning season for UW since 2006-07 and the first postseason appearance since 2009-10. In his final season his Huskie squad finished 21-12 with a second round finish in the WNIT.

Prior to his stint in Washington, McGuff was the head coach at Xavier for nine seasons. As the head coach of the Musketeers, McGuff compiled a 214-73 record and set a school record for most wins in program history, reaching the postseason in each season he coached. His five consecutive NCAA tournament appearances was also a school record. During that stretch, McGuff’s Xavier teams were consistently the class of the Atlantic-10, sporting a 106-28 record in nine seasons. In his last two seasons, Xavier went undefeated (14-0) in A-10 play.

McGuff led the Musketeers to four A-10 tournament championships, including his final year at Xavier. That season, his team posted a 28-3 record (.903 winning percentage) and reached the second round of the NCAA tournament. McGuff made the NCAA tournament six times overall as the Xavier coach. His pinnacle was an Elite Eight appearance in the 2009-10 season, where his team was one missed layup away from the Final Four. 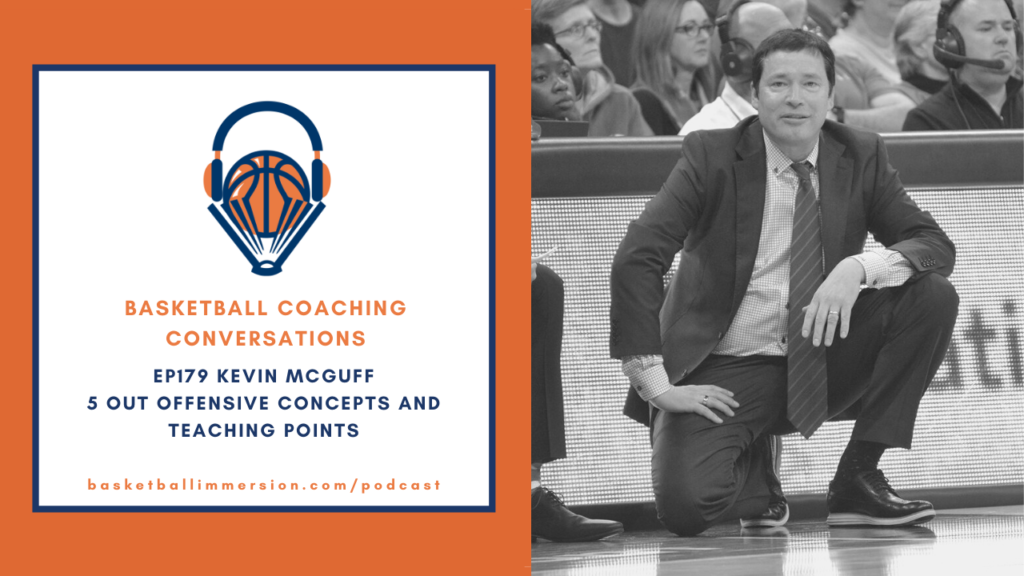 “We were having success with the dribble drive . . but when you’re playing against elite rim protectors on the defensive end, it can be a little problematic . . I started getting a little bit intrigued by some of the five out stuff I’ve seen in the NBA . . to take away the rim protectors.”

“We’re sprinting in transition as fast as we can into the five out spots. Our first thing is to attack the rim. We have a lot of quick actions not only just our guards, but we’ll try to get our post players in matchups that we like.”

“We have our post players running in different spots because on opposing teams, most players like to run to the paint and look for their post player . . but we want them running to any position. So, truly positionless basketball off of a missed shot.”

“We play 3-on-3 almost every day with all these different actions, we get our scout team to guard them different ways to try to get them in the idea of reading how the defense is guarding them.”

“A huge part of our deal is to try to create gaps and driving angles . . we’re going to attack and play as fast as we can . . but then . . start to flow into the rest of the stuff . . continue to execute, maintain spacing, or recreate spacing after an action.”

“We’ve really established a specific offensive identity. It’s given us great direction in the type of kids that we recruit.”

“Everybody wants to play really fast, until it means getting in incredible shape and playing fast . .so just the consistent pace and expectation that you’re going to sprint the floor all the time, no matter what.”

“I think it’s a really big part of college basketball that your strength and conditioning coach is in total alignment with what your style of play is going to be.”

“We just had a five-minute segment where we got a couple layups because we were relentless about running the floor. Now connect that to a 40-minute game and just [imagine] the impact that can have for us.”

“We do talk a lot about what is a good shot and shot selection and making sure it’s a shot that you have mastered and perfected . . making sure they’re educated on time and score.”

“For kids that aspire to play at the next level, we are running an offense that will allow you to get to learn how to do that. And we’re developing our players within the offense. It’s a perfect kind of segue into your professional career.”

“We want the game to get going fast, because that’s our style. We feel that most opposing teams don’t want that. So that’s what we want.”

“Each one of my assistants has a core player group and we talk about, ‘What does each person need to be successful within the system?’ I’ll try to have a plan to plug them in to be successful.”

Kevin McGuff Links from the Podcast: