In this week’s coaching conversation, Monbus Obradoiro assistant coach Gonzalo Rodriguez joins the Basketball Podcast to discuss the Next Pick and Roll Defense.

Coach Rodriguez has coached basketball at all levels for the last 32 years. The last 12 seasons he has been an Assistant Coach in the ACB league in Spain, one of the top leagues in the world. He is currently an assistant coach for Moncho Fernández with Monbus Obradoiro.

Besides coaching, Gonzalo Rodriguez teaches a basketball coaching degree academy for the Galician Basketball Federation). He has also coached youth teams (under 20, under 18 and under 16) and has coached for Balneario de Archena, LEB Bronze, CB Murcia, Liga Endesa, Blu:Sens Obradoiro, LEB.

The Next Ball Screen defensive coverage can be used vs. teams running ball screen. It is basically a run and jump in the half court. It involves the player one pass away on defense, switching hard onto the dribbler as the ball is driven off the ball screen. Usually it involves a third or fourth defender in the next coverage so it becomes a full rotation. 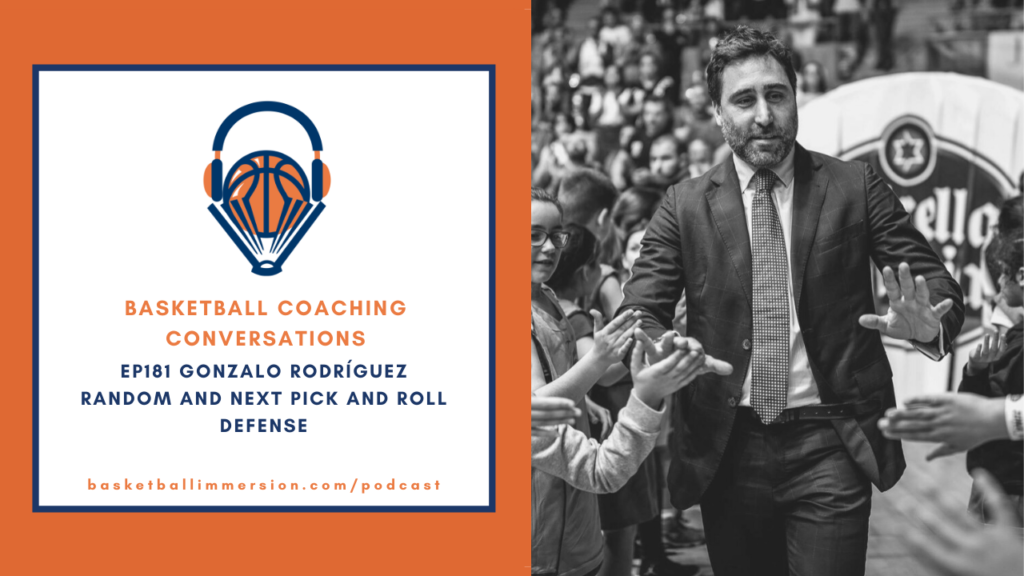 “Random defense is this: give different answers to the same problem, which is the pick-and-roll, based on if the ball goes to the single side or the full side and also based on the characteristics of the opponent.”

“The on-ball defender has two main responsibilities. The first responsibility is to guard the rejections. We always tell the guys, rejection is one-on-one defense, it’s not pick-and-roll defense . . the second goal is to go over the pick and we work on two different ways to go over the screen.”

“[The ‘next’ defense] is an aggressive defense, it is an act not react defense because you can choose who takes a shot. You can take shots away from different players.”

“[The screen defender] can be higher or deeper. But he knows when we play ‘next’ defense that his main responsibility is guarding the roll. He doesn’t have any responsibility for the ball handler. He is not going to be the man who is going to guard the layup or the pull up. He must guard the roller.”

“If we decide to run ‘hot’ defense, it is automatic for one moment. It’s not really a trap, because the defender of the ball rotates immediately but the difference is that the ball handler is facing a guy just running to him, sometimes it’s in a surprising way. It’s a more aggressive defense and it is much more difficult to pass the ball in those situations so you really stop the ball.”

“We have to teach the players to make decisions from the court. And the better their decisions are, the more successful the defense is going to be. If the coaches have to call all the pick-and-roll defenses in the game, it would be crazy.”

“We ask the players to make reads on offense, why not ask them to do the same thing on defense?”

“Usually, handoffs are motion handoffs, so the guy who receives the ball is sprinting to the ball. That means his first dribble is not very vertical to the basket, it’s more to the side. There you have an opportunity to run the ‘next’ defense because of . . the inertia of the movement. It is a good moment to run the ‘next’ defense and then you don’t have to use switches.”

“There are two big strengths in this defense. The first is that the big man defender has a very easy job. And [secondly], he doesn’t have to be so close to the basket, he doesn’t have to be in a drop position . . If you have the big man defender too low in the paint, the pick and pop is very difficult to guard. But the big can even be in contact with the screener because his only responsibility is the roll; it doesn’t matter if the guy rolls straight to the basket, if the guy pops, or if the guy rolls to the opposite side of the paint.”

“What makes this defense different and difficult to attack is that the office doesn’t know what’s going to happen. Sometimes you just run and jump on the play, sometimes you fake it, sometimes you don’t. The key is to mix different situations.”

Gonzalo Rodriguez Links from the Podcast: