Mazulla coached the 2021 Boston Celtics summer league team. He joined Boston’s coaching staff in 2019-20 after guiding Fairmont State University to a 43-17 record over two seasons as the program’s head coach from 2017 to 2019. His Falcons went 22-9 in 2018-19 to claim the program’s fifth NCAA Tournament bid over the last seven years.

In joining the Celtics organization, Mazzulla returns to the Northeast where he served as an assistant coach for the Maine Red Claws of the NBA G League during the 2016-17 season. In addition to his two years as a head coach in the collegiate ranks, Mazzulla brings five years of assistant coaching experience between Fairmont State (2013-2016) and Glenville State College (2011-2013).

Mazzulla attended West Virginia University, where he played collegiately for all four seasons under head coaches John Beilein and Bob Huggins. He advanced to the NCAA Tournament all four years and was named to the Big East Academic All-Star Team three times (2007, 2009-10) with the Mountaineers. 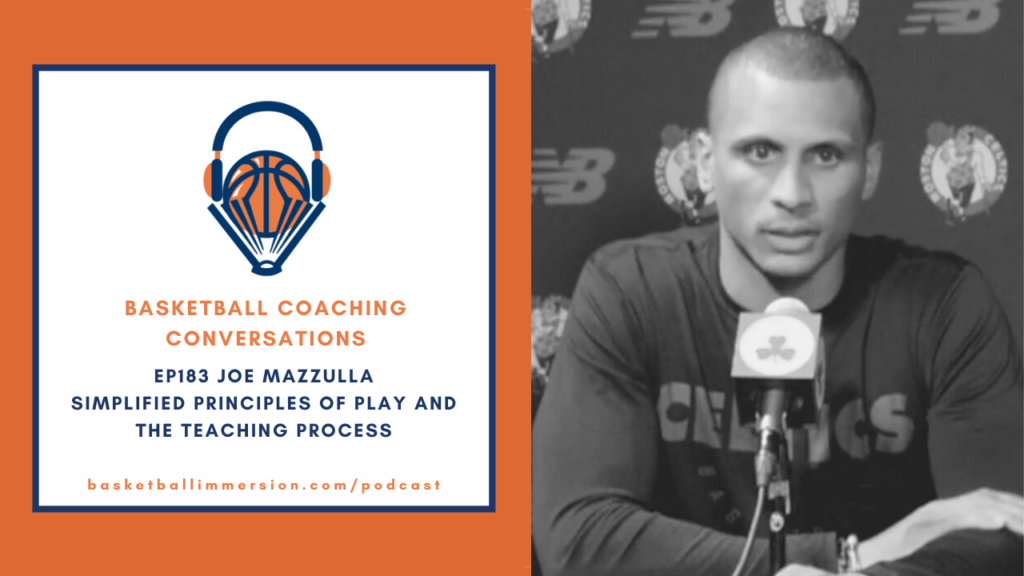 “Having a curriculum was relatively easy in the sense of, ‘What do we want to accomplish every day?’ But then once we accomplish it, when do we retrieve that practice? And then how do we know and trust that our guys have grasped it?”

“There’s the communication and the relationship aspect. You kind of know going into a film session who you’re going to cold call and why . . the edit that we had going was scripted, in the sense of, I knew exactly when I was going to stop, I knew what question I was going to ask, and I knew what answer I was looking for.”

“Each clip had three components to it: When are we going to stop it? What are we looking for? What’s the answer?”

“You can’t perform and learn at the same time, you can only do one or the other. And too many times as coaches our communication is intertwined during their performance. We’re trying to teach them and you can’t teach during performance. And so, I do think drills are necessary to teach, to build awareness to know what the guys need to work on and to build awareness of when they’re going to use it.”

“We made an edit of the situations that you’re going to be in on certain parts of the floor, offense and defense, and we just watched that. We built situational awareness.”

“If we weren’t meeting our objectives, you could come at them and say, ‘What do you think has gone wrong on the last four possessions?’ and hopefully, you’ve done your job as a coach to where they know. The second part is, ‘Why haven’t we gotten to our space in five seconds in the last four or five possessions? Do you realize that that’s the difference in the game?’ I think you can frame your questions to help them raise the level of their game.”

“They [the players] want that balance. They want to be held accountable to the highest standard. And I think as a coach, it’s just it’s finding that space of when to do it, and then when to help them do it themselves.”

“Having an objective-based approach eliminates the emotion out of it to where you can strictly coach the execution of it. And then you use your relationship-based approach to have the effort and the buy-in. The majority of your coaching at this level is going to come from the execution aspect of it.”

Joe Mazulla Links from the Podcast: