At the start of the 2021-22 season, Todd Simon will be in his sixth year at the helm of the Southern Utah University men’s basketball team after being named the head coach on March 24, 2016.

Simon led the Thunderbirds to their first ever Big Sky Championship during the 2020-21 season, as they were named Big Sky Conference Regular Season Champions after finishing conference play with a record of 12-2.

The 2020-21 edition of the Thunderbirds also finished the regular season with the best scoring offense in the Big Sky, averaging 84.2 points per game. That number was good enough for the third highest mark in the NCAA as well.

Simon was named interim head coach of the UNLV men’s basketball program in January 2016 and immediately led them to three consecutive victories. During Simon’s 17 games, the Runnin’ Rebels ranked as the number one team in the nation in adjusted tempo, scoring more than 100 points in four games. UNLV finished with a 9-8 record, despite playing with as few as five scholarship players.

Prior to being named interim head coach, Simon was in his third year as associate head coach with UNLV and had a critical role in assembling UNLV’s roster, which Rivals.com ranked its 2014 recruiting class No. 5 in the nation, while the 2015 class was ranked No. 11.

Prior to his tenure as a Runnin’ Rebel, Simon served Findlay Prep for seven years in both head and assistant coaching roles.  As head coach at Findlay Prep in 2012-2013, he led the team to a 35-1 record, including eight wins over top-25 ranked teams.

The 35 victories are the most wins in school history. During Simon’s tenure at Findlay Prep, they accumulated an overall record of 192-9.

During his career Simon has helped develop and coach several players that have become top NBA draft picks, including Anthony Bennett, who was selected as the top overall pick in 2013, Rashad Vaughn, who was picked No. 17 in 2015, and Avery Bradley. Other NBA player’s Simon has coached in his career include Christian Wood, Jorge Gutierrez, Cory Joseph, DeAndre Liggins, Nick Johnson and Tristan Thompson. 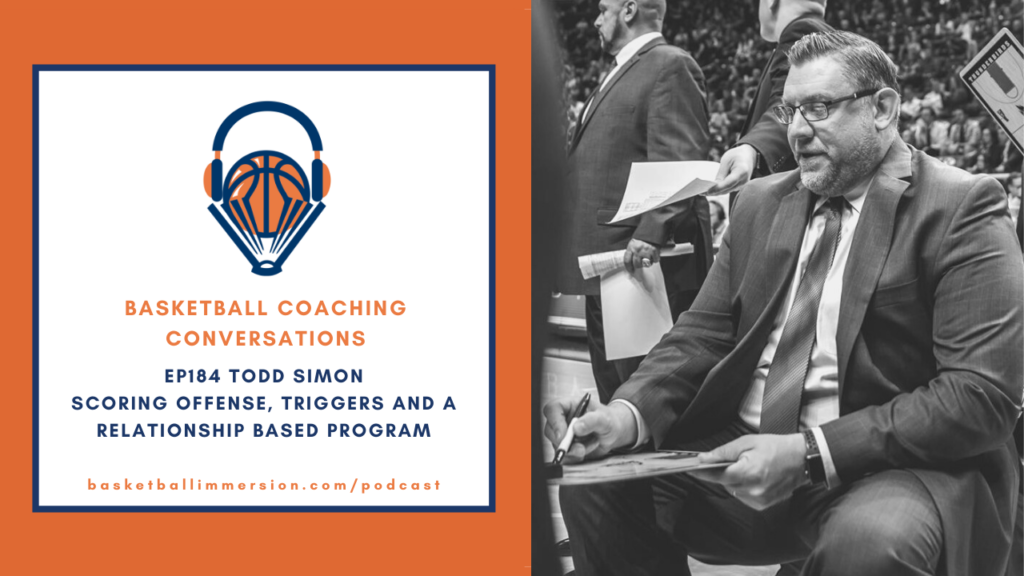 “We’re an attacking team. We get to the free throw line a lot . . it’s easy to score more points when you’re scoring when the clock is stopped.”

“In transition, [it’s very difficult for the] help side to be on time, so there’s opportunity there to attack that. In the half court, everything we do is about rim pressure.”

“We don’t want to get deep in the paint unless we have an opportunity to finish. We want to pound the high paint; that’s such a hard place to help to. We want to collapse defenses.”

“In transition, we want to get downhill one through four . . we’re not bringing a guard back, we’re filling the x’s, we want to get to the corners . . that gives our guys a chance to get guys in backpedals . . and then in our initial looks, we can kick it up. That’s what we want because there’s rarely going to be a good help side.”

“You’ve got to get guys to do things at a high level of energy and effort, thinking fast, making quick reads and that’s what we tried to have as the emphasis in our program.”

“Transition D is just so demoralizing . . we really want to play sideline to sideline as well as north and south . . if we can get a kick ahead opposite and all of a sudden that defense is scrambling . . it’s usually a tough closeout.”

“We were one of the lower turnover teams and a lot of that has to do with our spacing and just giving the handlers the room to make plays.”

“Everyone works on the same contrived ball screen coverages. And so for us to do stuff that’s fast and quick and non-traditional, that’s something that’s going to be a little different for them . . it’s not going to be what you worked on for 100 days.”

“I think that’s where Division One basketball is with the transfer portal. Players have to feel like they’re getting better, that they’re valued, that they’re part of something bigger than themselves and they’ll stay and it’ll work.”

“Player development isn’t just getting in the gym and getting 500 shots, it’s explaining the why of what you’re doing.”

“My job, as a coach, is to prescribe exercise . . that we think are going to apply to winning. If we do a drill and they do well, we just move on . . We probably play more than anybody in the country; we play a lot . . we compete in everything we do.”

“We try to use numbers to teach because it’s not emotional . . it’s having guys take ownership in it. They’re doing it for them; they’re not doing it for me. That’s a huge step in player development.”

“If you shoot a bad shot, it’s telling four other guys, you do not trust them enough to pass it to them. When they think about it in those terms, a lot of times guys want to be a part of the team, they want to do the right thing.”

“You put them in a 5-on-5 setting because the game isn’t the physical part. The game is quick thinking . . You’re processing over and over. It’s a quick chess match the way we’re trying to do it and so we want our guys to think faster than our opponent.”

Todd Simon Links from the Podcast: