Home » Podcast » The Basketball Podcast: EP190 with Maligi, Autry and Justus on Being an Assistant Basketball Coach
RELEASE DATE : 17/11/2021

In this week’s coaching conversation, three power five assistant coaches, Ulric Maligi, Joel Justus and Adrian Autry join the Basketball Podcast to discuss roles, responsibilities and being the best assistant basketball coach you can be.

Adrian Autry returned to his alma mater Syracuse when he was named an assistant coach prior to the 2011-12 season. In March of 2017, Autry was promoted to associate head coach.

Autry embarked on a coaching career in January 2006 when he was hired as associate head coach at Bishop Ireton Catholic High School (Va.). He became AAU basketball coach with Nova United in April 2006, leading the 14-Under team and then the 15-Under squad. In September 2007, he became assistant basketball coach at Paul VI High School (Va.). He was named an assistant coach on the AAU Triple Threat squad, working with the 17-Under team, in 2008. He moved into the collegiate ranks in 2008 when he was hired by then-head coach Seth Greenburg as director of basketball operations at Virginia Tech. He was later promoted to an assistant coach post.

Autry has strong, deep ties in the Northeast, particularly in the DC area, Canada and Upstate New York. Among the players he’s recruited include Chris McCullough, Tyler Ennis, Jerami Grant and a host of others.

Joel Justus joined Arizona State’s staff in May of 2021 after working the previous seven seasons at Kentucky, including the past five as the assistant coach. He previously worked as the director of analytics and as the special assistant to the head coach.

Justus came to UK after serving as the head coach at Davidson Day High School in Davidson, North Carolina. In both years at the helm, he guided the Patriots to the Elite Eight in the state tournament. Prior to his time at Davidson Day, Justus served as the head boys’ basketball coach at Woodberry Forest School in Woodberry, Virginia, from 2008-12. During his time at Woodberry Forest, he guided his team to the Virginia Prep League regular-season championship in 2010 while advancing to the Virginia Prep League championship game in consecutive years, a first in more than two decades.

Justus has spent time in college basketball as an assistant coach at Elon University from 2004-08, where he helped guide the Phoenix to a Northern Division title in 2006 and the Southern Conference championship game in 2008.

While at Kentucky, Justus played a significant role in their recruiting success, recruiting a number of five-star recruits, including Bam Adebayo, Shai Gilgeous-Alexander, Immanuel Quickley, Keldon Johnson and a host of others.

An assistant coach under Chris Beard at Texas Tech for the previous two seasons, Ulric Maligi enters his first year as Assistant Men’s Basketball Coach at The University of Texas. Maligi brings 14 years of collegiate coaching experience to the Texas staff.

Maligi accepted the job of assistant coach at UTA for the 2006-07 season when he was 21 years old, making him the youngest Division I assistant coach in the country at the time. He began his coaching career as the head manager during his undergraduate time at Howard University.

Maligi has made his mark as a recruiter at every coaching stop. His strong relationships in Texas have led to success there, but also nationally. Danuel House, Mac McClung and Yanick Moreria are just a few of the top players Maligi has recruited. 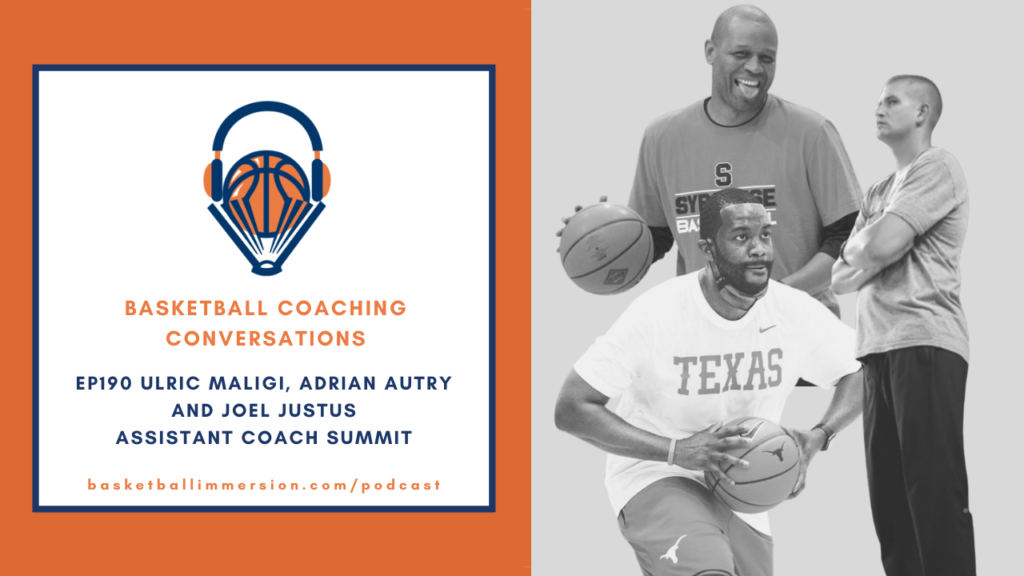 Coach Justus: “I think that’s been the biggest thing for me . . what do we need to add or polish up, both on the floor and off the floor, to help us take that next step?”

Coach Magiri: “I think the value would be knowing . . how to carry yourself on campus, with administration and . . what he [the head coach] expects in the classroom, the excellence and the small details.”

Coach Autry: “We all strive to become the head coach and take that next seat. This is the greatest experience and as you go through it with your coach, I think you always have to be able to evaluate every day, every situation and don’t let a situation kind of get past you without evaluating and putting yourself in that position.”

Coach Magiri: “For the last two years, I journal every day. I take notes, not just in practice but in every meeting, all day long. I keep an index card and a pen on deck.”

Coach Justus: “He [John Calipari] was extremely supportive and positive of me making the move that I did to come and learn more and learn different aspects of a program.”

Coach Autry: “My playing. experience overseas really had a big impact on me . . it [helped] me to grow as a person seeing different styles of basketball when I played in Europe, and that really shaped me as a basketball player and a basketball mind.”

Coach Autry: “Everybody that is in this profession wants to get better. And in getting better, you can’t always hear what you want to hear, you’ve got to hear some things that you’re not doing you and you seek that and you want that . . I want to be effective and impactful.”

Coach Justus: “I think the deposits have to be way more than the withdrawals, especially early on, in a relationship, especially in coaching or teaching . . Something is very important to each one of our guys. Finding that out, and being able to have an authentic conversation or relationship with them, is paramount if you ever want to be able to coach them.”

Coach Magiri: “When I’m a head coach, I don’t want anybody in our organization that people don’t rave about . . an assistant coach that other coaches that have worked for him rave about, his former bosses rave about . . this idea of rave, I think is powerful.”

Coach Justus: “You’ve got to also figure out what your value is for your head coach.”

Coach Autry: “I want a we-guy [as an assistant coach], someone that wants to be impactful [and who] makes an impact on a daily basis.”