In this week’s coaching conversation, Xavier University head coach Travis Steele joins the Basketball Podcast to share his insights on what happens from one game to the next game during the season.

Steele is 51-37 in three seasons, including a 13-8 mark in the COVID-shortened season of 2020-21. Steele led XU to a 19-13 record in the 2019-20 season, which was cut short prior to postseason play by the COVID-19 pandemic. Steele was a finalist for the Joe B. Hall National Coach of the Year Award, which is given annually to the nation’s top first-year head coach in Division I. Steele, who finished 19-16 in his first season as the Xavier head coach, led XU to eight wins in its last 11 games. All of the opponents for those 11 games were in either the NCAA Tournament or NIT fields, including seven road and neutral site games.

Prior to being named head coach Steele spent the previous 10 seasons at Xavier, including nine on the staff of his predecessor, Chris Mack. Steele has been a part of nine NCAA Tournament teams at Xavier, including five teams that reached at least the Sweet 16. The 2017-18 team won Xavier’s first Big East Regular Season Championship, a school-record final AP ranking of No. 3 and the first NCAA Tournament No. 1 seed in school history.

Former Xavier head coach Sean Miller hired Steele prior to the 2008-09 season as Xavier’s Director of Basketball Operations. Mack promoted Steele to assistant coach after he took over the program prior to the 2009-10 season. Steele was promoted to Associate Head Coach following the 2015-16 season.

Prior to Xavier, Steele worked on the staff at Indiana. He joined the Hoosiers in August of 2006, taking on the duties of the video coordinator. After serving as the video coordinator for a season and a half while at IU, he was promoted to the position of assistant coach in February of 2008.

Prior to his time with the Hoosiers, Steele served as an assistant men’s basketball coach at Wabash Valley College (2005-06) and spent a year with the Ohio State basketball program as a graduate manager (2004-05) under former XU head coach Thad Matta. 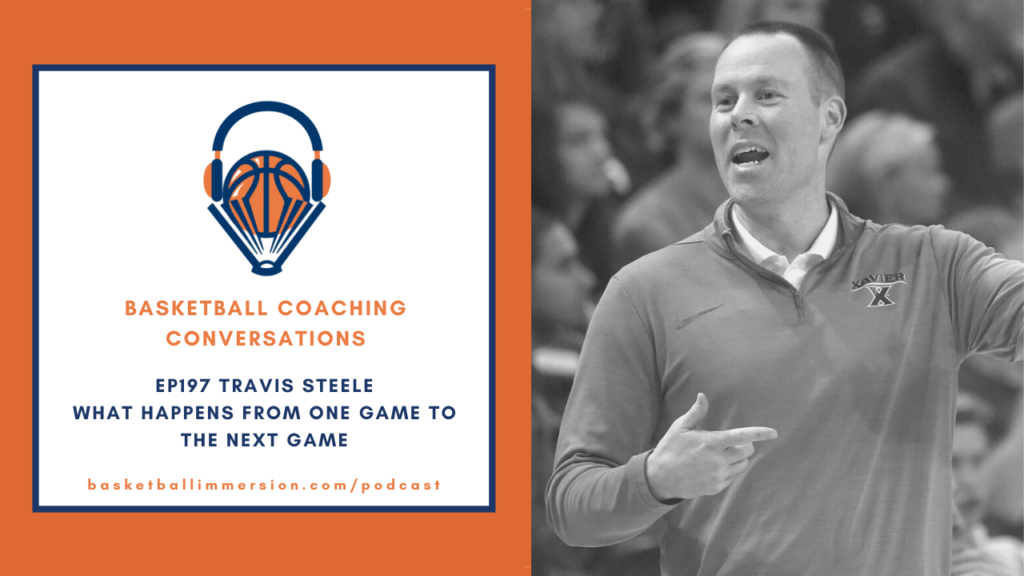 “I look for game goals; I have goals on the offensive and the defensive end that I’ve come up with to keep us in the top 25 nationally on both the offensive and defensive sides of the ball. I have my own sheet I type up as I’m watching to see if there are any areas where we’re trending in the wrong direction or, hopefully, continue to trend in the correct direction.”

“He [the assistant coach] gave me a file folder right after the game that had everything in there [for the next game]: personnel, his thoughts on practice, his thoughts on how we’re going to defend certain specific actions, what we need to do in order to win the game.”

“I usually don’t give too much of an emotional speech after the game because I want to watch it first. I always want to give them [the players] the correct information. So you know we’ll wrap it up and let them know what the schedule is for the next day.”

“That next morning, we usually watch film with our guys . . I’m big into themes. I don’t want to just show random clips because . . I don’t think players get anything out of it and I want it to be short . . I’m not trying to watch a full half or a full game . . It is, ‘Hey listen, we didn’t play off the two feet well enough in the half court. Here’s three clips of that.”

“The one thing that I will talk about after the game is how many wars did we win? We break down the game into 10, four-minute wars . . we let those guys know where we are during the game, right. And we always say the team that wins the most four-minute wars usually wins the game. And then, I always let the guys know how many kills that we had. So ‘kills’ would be getting three stops in a row. It’s something we talk about every time out as well. Our goal is to get seven kills in the game. And we’ve done that with 97.5% of our games here at Xavier.”

“Our philosophy here at Xavier is we’re a do-what-we-do program. We want to get better in our own hands. So, when you’re looking at the next opponents . . our guys already know how to guard it. They’ve had those habits all fall, leading up to the preseason. So, it’s more about just doing us.”

“One advantage of doing it this way [focusing on what you do] is your guys get the habits that they need. You get better in your system throughout the year, you’re not changing game to game. But there’s also that sense of pride in when your seniors can teach your younger guys, ‘This is how we do things here at Xavier.’ It’s a heck of a lot more powerful coming from a senior or junior who really knows our system than coming from me. And that’s when you create that leadership that you really need within your program to be successful as well.”

“I think [our lifting program] is a little unique. Our strength coach, Chase Campbell came from the Orlando Magic. And that’s how they do it in the NBA, you lift every day that you practice. It took a little bit of time for our guys to adjust to it, but it’s been great for our guys.”

“If effort is ever an issue, that’s when I get really mad. If it’s about execution, then I’m not teaching them well enough. They’re not understanding it well enough, that’s on me. If we’re struggling with something, I’ll try to simplify it even more. I think we all have these great ideas . . but it doesn’t matter what you know, it just matters what you can get your players to execute.”

“It all comes back down to effort. That’s what I want from all of our guys, max effort in everything we do in life . . It doesn’t matter what you’re doing.”

“Talking about the offensive game sheet . . Different scenarios, what are we running? Or if we’re down by two or up by two, all the scenarios at the end of games . . so I’ll have all these little notes on plays that we’re going to do and how we’re going to try to take advantage of certain personnel that they have out on the floor at specific times.”

Travis Steele Links from the Podcast: