In this week’s coaching conversation, Ferris State head coach Andy Bronkema joins the Basketball Podcast to share insights on running a program with a simple identity: rebound, run, and pass.

Andy Bronkema, who took over prior to the 2013-14 season, led the Bulldogs to four-straight GLIAC Tournament Championships and NCAA Tournament appearances from 2015-18. The Bulldogs posted their sixth-straight 20-win campaign last year in 2019-20 while recapturing the GLIAC Championship and earning yet another NCAA Division II National Tournament berth.

In 2017-18, he led FSU to one of the most historic seasons in Division II basketball history as Ferris State claimed the school’s first National Championship with a memorable 38-1 record, tying the all-time mark for most wins in D2 history. For his efforts, Andy Bronkema was a consensus choice as the National Coach of the Year and led the Bulldogs to a second-straight GLIAC regular-season crown and the school’s fourth tourney title in a row.

In 2016-17, Ferris State posted a then school all-time best 28-5 overall record under Andy Bronkema’s direction while capturing both the GLIAC Regular Season and Tournament Championships. FSU advanced to the D2 Midwest Regional Semifinals and led the country in blocked shots for the second-straight year.

The Bulldog men’s basketball squad closed a memorable 2015-16 campaign with a 24-10 overall record. FSU also reached the NCAA Division II Sweet Sixteen while finishing with its first back-to-back 20-win campaigns since the late 1980’s. The Bulldogs made their first appearance in the NCAA Tourney under his direction in 2014-15 after claiming the league tournament title.

Prior to becoming head coach, with Bronkema as the Bulldogs’ top assistant, Ferris State wrapped up the 2012-13 season with a 14-13 overall record and the Bulldogs reached the GLIAC Postseason Tournament. 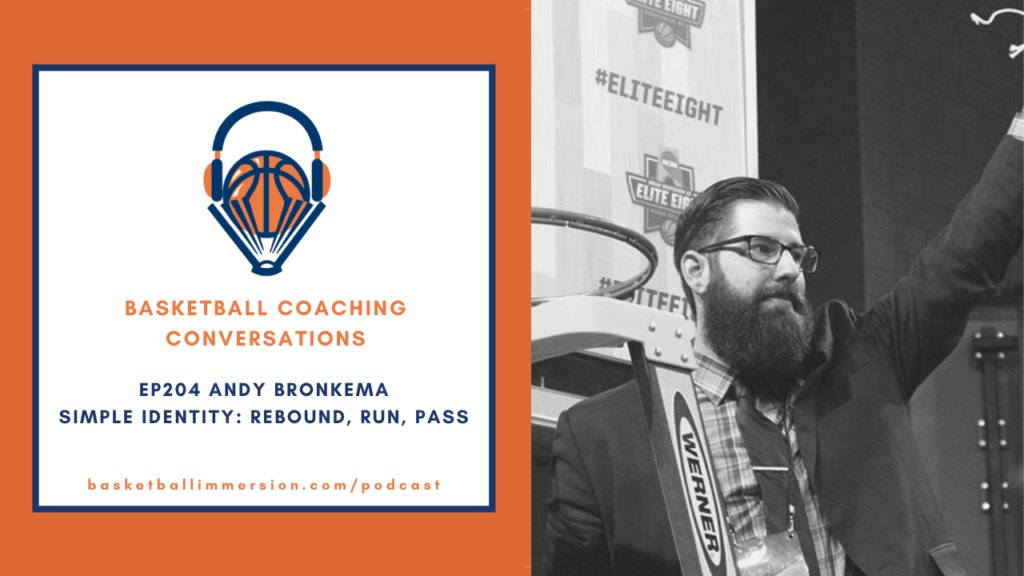 “You recruit towards that Ferris State type of person. It’s blue collar with a chip on your shoulder. And it’s really somebody that wants to develop. We’re getting a lot of ‘no’s in recruitment, but the ‘yes’s we get are real good fits.”

“After we run our fast break, we have some secondary way to go from fifth gear to third gear . . and we move spontaneously.”

“We have a lot of conversations with our players about what we think their strengths are. We come to agreements, we prove it to them or they just agree, but they get to play within this spacing and within the structure.”

“They [the players] enjoy the freedom but it’s a controlled freedom. We really spent a lot of time teaching them what their skill sets are, how they can make their team better, or how they fit into the motion, because every action within the motion is simple. But, if you combine them all together, it’s pretty complex.”

“The best way to describe our pressing is we junk it up a little bit. We throw a lot of variations and a lot of stuff at people and we press because with the shot clock we have to defend less actions in the half court . . I think it can work to wear teams down that might not have as much depth. . And we’re playing 10, sometimes a lot of guys. So that’s part of the pressing philosophy.”

“When you press you have to live with a lot of different things that you can’t control. So that’s even messier if you’re pressing after misses . . and you know coaches like to have a certain amount of control.”

“We have good players. When they buy in, and they understand things, they really make a lot of plays out there for you. I think you could take away those possible plays that could be made by controlling things.”

“Every once in a while I’m barking commands on the sidelines a little bit too much. And I get reminded, even though it might be right what I’m saying, it’s bogging them down. They’re thinking too much; they’ve got to be able to play basketball. And if you want to do those things, teach them better in practice.”

“With a traditional rim run, even if you don’t get it a lot, everybody vacuums to that rim runner . . but the rim run over the years for us has become like a read: if the rim is open, you run to it.”

“We’re running and running fast creates bigger gaps. You start to jog, you never get all the way to corners, and you don’t open up those driving lanes. And I think the biggest thing is that they will get the ball, and that’s motivating . . we’re trying to try to make people run, but we’re rewarding them.”

Andy Bronkema Links from the Podcast: