In this week’s coaching conversation, Bryant University head coach Jared Grasso joins the Basketball Podcast to share insights on building a program by playing with pace.

Jared Grasso enters his fourth season as the head coach of the Bryant University men’s basketball program in 2021-22.

Grasso, who recently completed his fourth season as the head coach at Bryant, led the Bulldogs to a Division I program record 22 wins (22-10 overall) in 2021-22. Bryant won 17 of its final 21 games enroute to capturing the program’s first-ever Northeast Conference Regular-Season and Tournament titles – the first such titles in 60 years in the program’s history. Grasso was named the Jim Phelan NEC Coach of the Year for his efforts. He’s coming off a trio of firsts in the 2021-22 campaign — a Northeast Conference regular-season title, a league tournament crown and a corresponding NCAA Tournament berth.

A finalist for the Hugh Durham Award given annually to the top mid-major coach in the country for the third time in four years, Grasso has a career coaching record of 62-54 overall at Bryant, guiding the program to 15 wins in each of the last three seasons. Since taking over in 2018-19, Grasso has led Bryant to more overall wins (62) and more conference wins (44) than any other team in the NEC.

Grasso was tabbed to lead the Bryant program after most recently working for the last eight seasons at Iona, where he helped the Gaels to unparalleled success both at Iona and in the MAAC. Prior to Iona, Grasso spent four seasons on the staff at Fordham, including the majority of the final year as interim head coach. He also served as an assistant coach at his alma mater Quinnipiac. 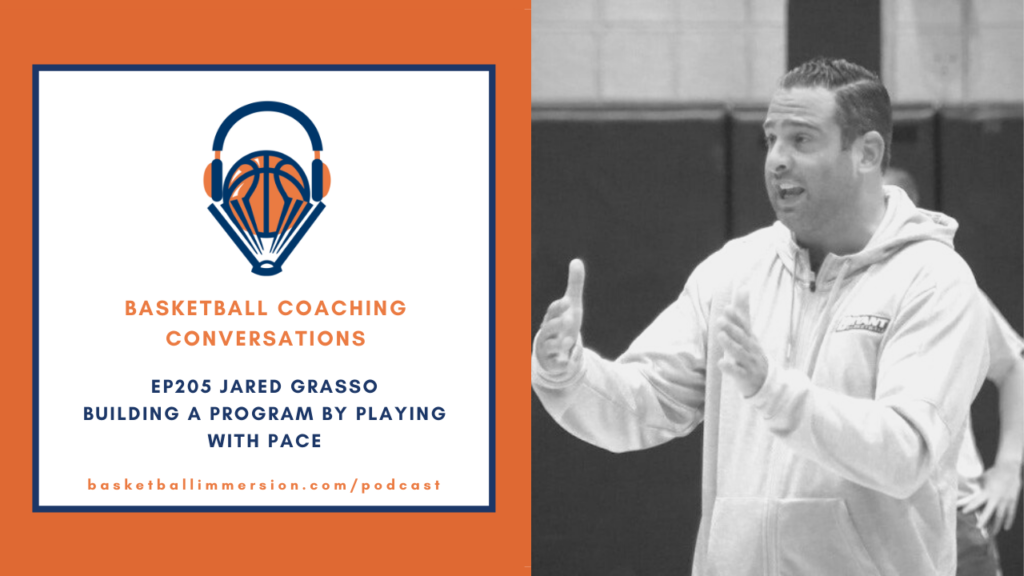 “I just tried to instill the culture I believe in of how hard guys need to work every day to be successful players, successful student athletes, successful in life, and to have a successful program. And it was a little bit of a culture shock for some of those guys early on [regarding] my expectations.”

“Our drills are daily drills, our philosophy is every day . . you still have to work on it [playing fast]. Because if you don’t, you will stop running. And a lot of teams who play faster early in the year, as the season goes on, stop doing it. . to me, it’s got to be an everyday thing.”

“When you get a guy to buy into it, they can start your break. You can be really good in transition on makes if you get [the ball] out of the net quickly. If you don’t get it out of the net quickly, it doesn’t matter how well your wings run their lanes, you’re still not going to get the early offense you want.”

“We like having multi-skilled guys in that trail spot. So I’ll put big point guards there, I want someone there that can make shots because it stretches the floor. . I’m comfortable putting different guys in those spots. Early in the year, I’ll tinker with different guys at different spots because I think it makes you harder to guard.”

“When the ball hits our trail spot, to me, we’re out of transition offense and we’re into half court offense. Depending on who we have in that spot, we’ll do different things . . a lot of it is personnel-based.”

“We like to get after people we want to be aggressive. This year, probably about 80% of makes we’re pressing on. We have about six different pressures we can play, some aggressive, some tempo. I just think it makes you more difficult to prepare for. Kids want to play that way and it’s hard, so you have to practice that way every day.”

“Being around outside the box thinkers was the best thing that ever happened in my career . . we’d sit and talk in the office for hours about basketball . . just coming up with ideas, ‘What can we try? What can we do different? What can we look at?’ because basketball changes and . . you’re trying to stay ahead of the curve.”

“There’s an intensity to what we do and there’s a pace to the shooting stuff. It’s not easy. The guys who have been through it now for two and three years can tell those other guys, if you continue to work, you’re gonna love this, but there’s days it’s gonna be hard . . But there’s going to be games where there’s four minutes left . . and you look at guys who have their hands on their knees and say, ‘Alright, we’re right where we need to be. We know how hard we work. We know how fast we play. We know how much time we’ve put into this.’ And you build a pride in that.”

“If you can speed someone up with your pressure and get them to shoot quick jumpers, long rebounds help us get out in transition.”

“We’ve tried to be as efficient as we can in terms of getting the guys the right shots in the right spots. That’s something you learn as the season goes on. And then I’ll add three or four actions a week, new stuff going into each week that I think you can take advantage of another team with. We’re not afraid to put in new actions.”

“I tell them [new players] you’re going to have to work for your freedom. You’re going to get the freedom that you deserve which means, ’How hard are you going to work on your game?’ . . I do believe in our system, if you’re willing to work like that, you’re gonna have the freedom and opportunities to be a good player and to be put in positions to be successful.”

Jared Grasso Links from the Podcast: