In this week’s coaching conversation, University of Miami head coach Katie Meier joins the Basketball Podcast to share her seek the gap philosophy and ideas on creating an effective learning environment.

Katie Meier completed her 17th season at the helm of the Hurricanes’ women’s basketball program in 2021-22. A well-known and respected figure in women’s basketball with 21 years of head coaching experience, Meier has worked tirelessly to put her mark on Miami’s program and to build a winning tradition.

In her 17 seasons leading the Canes, Meier has amassed 10 20-win seasons and coached the team to 12 postseason appearances, including 10 straight from 2009-2019. Meier is the all-time winningest basketball coach – men’s or women’s – at Miami with 324 career victories.

Following an unprecedented career as one of the greatest athletes to ever play in the Atlantic Coast Conference at Duke, Meier quickly established herself in the coaching ranks. Her first head coaching position was an impressive four-year tenure as the head coach at Charlotte where she helped bring the 49er program into national prominence. 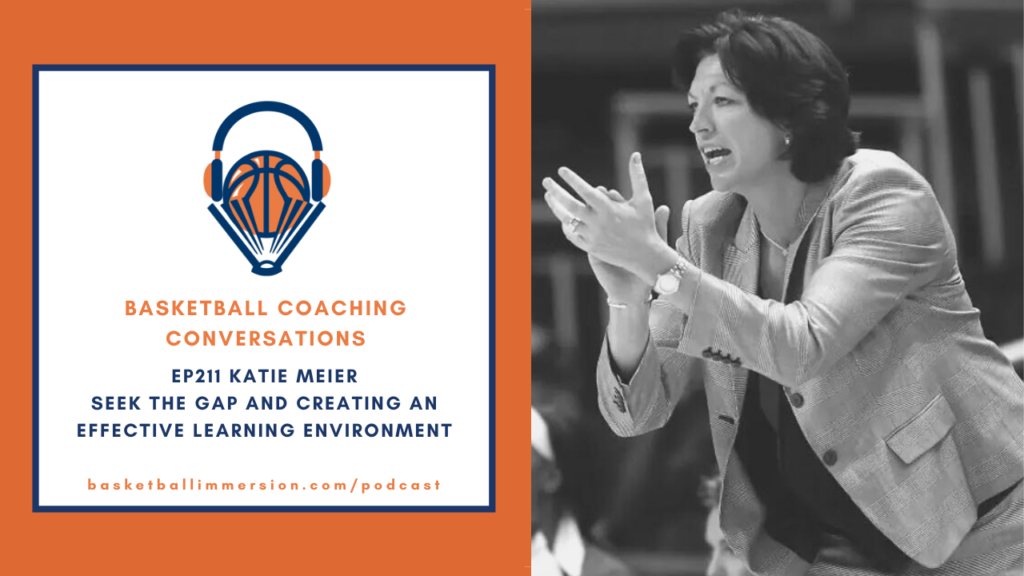 “This is the level that you can be at, and you’re not there. In between that is ‘the gap.’ The growth mentality is where people aggressively seek that gap and really want to live in that gap . . Here’s where we are, here’s where we want to be – let’s get to work.”

“I just made a living off of anyone who was a tweener . . if it was a tweener that could defend and put a body on someone who was hungry for the ball, I wouldn’t care if we were all between 5’11” and 6’1” and then just one point guard. We’re going to make it work because we’re going to press and run.”

“They’re just not going to go as hard if they don’t understand what’s on the other side of it. So, I think that a big job of a coach is to paint a picture and lead them and give them all this confidence and let them know where they’re going and then you kind of have to let them go a little bit.”

“The players carry me, in a lot of instances. They absolutely do. There are a couple of teams that got me through a really tough season. And there were a couple players that really stepped up.”

“I learned this in USA basketball, I will walk to every player as they’re stretching, injured, not injured, star, whatever, and I’m going to shake their hand or do something and look them in the eye and get a sense of where they are right now. Every single day, every single player, I want to understand we’re present together here today, we’ve got a job to do. This is my promise to you. I’m always going to be here and you need to be here for me.”

“Sometimes a mistake can make you more confident. The kind of mentality I try to have is like, ‘Wow, can you believe you missed that box-out? I know that’s not happening again, there’s no way that’ll happen again.’ That type of confidence is a way to coach through a mistake.”

“I think people get beat down by the issues they have to solve. I just think how grateful I am to be in a position where there’s a problem somewhere and you better believe, if I get involved, it might still be a problem, but it’s not going to be as bad. I’m going to help, I’m going to have an impact.”

“Someone comes in with a problem, and you just go straight to it. . .give me a to-do list towards the solution. Let’s get fired up about this and crush through it.”

“I do use a lot of analytics that help me kind of define the gap with it being not personal. I mean, I’m rooting for you, I hope you do it, but you’re not doing it. You’re not there.”

“If I think you’re going to be the leading scorer, how do I motivate you to act towards that? And how do I make sure that there’s support of this decision and that we’re all behind it? . . so that there’s a movement versus just a label?”

Katie Meier Links from the Podcast:

Habitudes Book #1: The Art of Self-Leadership