Alex Sarama shares team and player development ideas for basketball coaches, teams, federations, and organizations all around the world. Alex’s focus is on helping coaches stimulate their thinking by combining their personal & practical experiences with evidence-based coaching ideas.

During the season, Alex Sarama is the Head Coach of College Prep in Borgomanero, Italy. College Prep is one of the few prep programs existing in Europe which aims to send players onto careers in the NCAA or professional opportunities within Europe. At College, he also directs the player development program at the Italian club, which is renowned for producing some of the best players in Italy.

In June 2020 Alex’s new chapter started with Basketball immersion, teaming up with Chris Oliver to realize the vision of sharing the game and helping coaches and players benefit from evidence-based ideas. In 2021, through Basketball Immersion he released the BDT Offense, the world’s first resource to help coaches develop their own conceptual offense from scratch, using modern coaching ideas.

Alex Sarama also previously worked for NBA Europe. He continues to inspire us all with his practical applications of evidenced based coaching ideas and particularly of late his twitter threads where he connects so many dots for us coaches asking is there a better way? 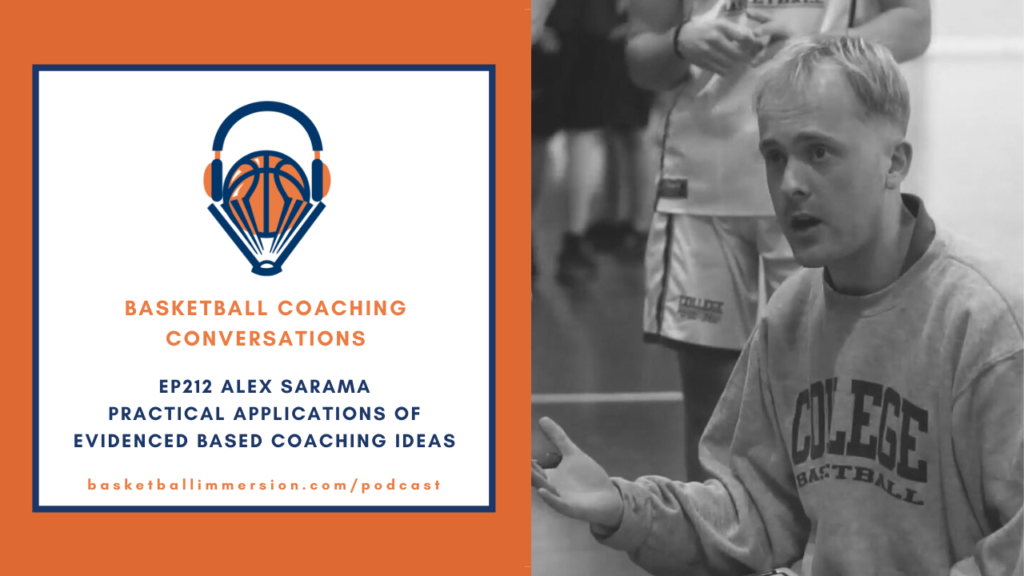 “To solve the degrees of freedom problem, we basically look at the interaction of constraints . . with a beginner, they can still self-organize.”

“A key kind of misunderstanding . . a lot of coaches believe in the idea that players have to explicitly be shown or taught a technique one on zero, to then do it in an actual game. And that’s just absolutely not the case. That doesn’t align with any of the evidence and research we have. Players of all ages, and all abilities can self-organize in the light of constraints.”

“Skill emerges and is an emergent behavior. It’s not a fixed property. Skill is the relationship between the player and their environment.”

“The traditional approach is typically characterized by a lot of decomposed drills . . a lot of 1-on-0 work, constant blocked practice . . it’s like a factory, a conveyor belt [with] players all being given the same checklist and moves and then they [coaches] expect a linearized process where they [players] slowly become better. But as we know, humans are complex systems, it doesn’t work like that.”

“We still see a lot of traditional stuff because coaches are coaching how they were coached as players, and it’s a perpetuating cycle. That’s why it’s so important that we try to be as informed as we can be by the evidence and incorporate that evidence into our coaching.”

“Especially for younger players . . there’s a lot of research which shows explicit internalized instruction is almost impossible for players to remember and act upon. So, it’s almost completely useless giving that type of feedback . . player enjoyment is the most important thing . . So why not use a coaching theory, which is way more fun, way more enjoyable for your players?”

“We acknowledged that basketball is complex . . The biggest problem with a lot of the traditional offenses, like continuity, read-and-react and running set plays rigidly through to the end, is [running the play] without looking for an advantage . . coaches are trying to control the uncontrollable and the number of possibilities.”

“With a conceptual offense, players adapt to the constraints present during each offensive possession, to generate an advantage and get a high value shot. So, it’s preparing players in their practices for what actually happens and what the nature of the game is all about, as opposed to trying to control the uncontrollable.”

“We do, of course, have a structure. We have spacing templates, known spacings, and we have a choice of triggers. And we have some coverage solutions that we do clearly emphasize as a team. But the key thing is, it’s the players who are deciding; I’m not calling it from the sidelines. The solutions they [the players] are coming up with are tuned to the affordances. So, any type of defensive coverage, the players are coming up with amazing solutions.”

“The essential idea with game models is that you have four phases of the game and we train those four phases together. Players really understand what our concepts and frameworks are and our aims within each phase of the game.”

“I feel a big weight of responsibility to ensure that the things I’m sharing are as accurate and evidence-informed as they can be.”

Alex Sarama Links from the Podcast: