Casey Hill enters his third season with the New Orleans Pelicans after spending 2018-20 as an assistant coach for the Los Angeles Clippers.

Prior to joining Doc Rivers’ staff, Hill spent the 2017-18 season as head coach of the Clippers’ NBA G League affiliate, the Agua Caliente Clippers, leading the team to a 23-27 record in its inaugural season. Hill joined the Clippers after four seasons as head coach of the Santa Cruz Warriors, G League affiliate of the Golden State Warriors, where he led the franchise to its first-ever G League title in 2014-15. Hill and his staff in Santa Cruz earned the 2013-14 NBA G League “Development Champion” award, an annual honor that recognizes the team that best embodies the league’s goals of developing NBA basketball talent via call-ups and assignments. Prior to joining Santa Cruz’s staff, Hill worked under his father, longtime NBA coach Bob Hill, with the Tokyo Apache, a professional team in Japan.

Hill is a graduate of Trinity University (TX), where he was a member of the Tigers’ basketball team that advanced three times to the NCAA Division III Playoffs, including the 2004-05 Elite Eight, and captured two Southern Collegiate Athletic Conference Championships from 2003-07. 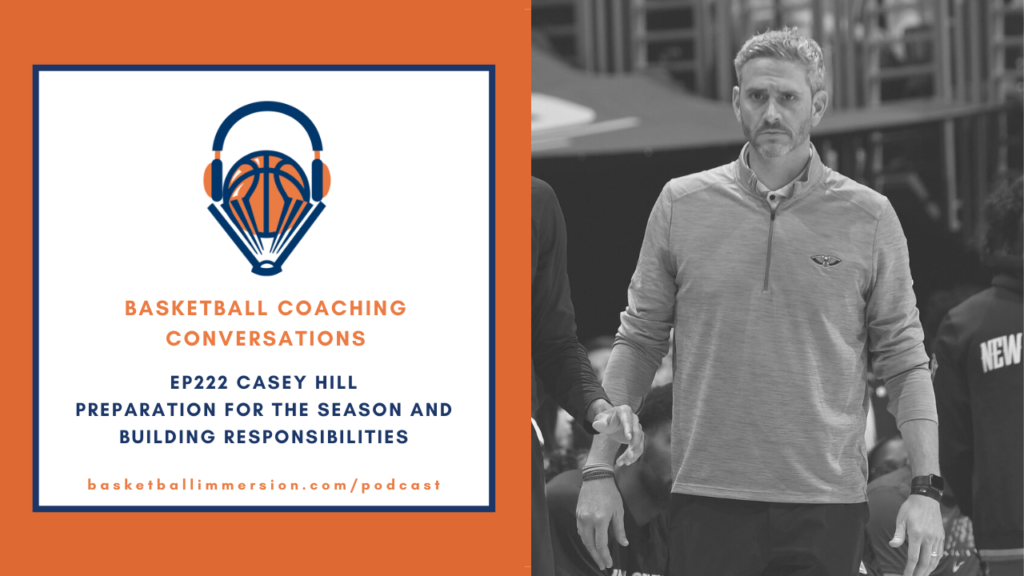 “I try to read three, four or five books every summer . . I’ll read a chapter, I’ll highlight things and I’ll go back and I’ll write down my notes on the things that I highlighted . . So, it’s a slower read but it’s something that I have found effective in terms of being able to take a good concept and actually apply it quickly.”

“Watching film to find the things that you think you need to get better at, that you legitimately feel like you can bring value to once the season begins or once your conversations as a staff begin . . and then also communicate what you’re doing so you’re not duplicating efforts around your staff.”

“Find things that you’re passionate about, dive into them. And then once you get back together, you can really kind of use all that to focus in and build your structure for the year to come.”

“The first thing you need to do is write a handbook for your staff, whether it’s 15-16 pages or 25-30 pages, you need to sit down and give it thought . . in the process of writing it I realized I haven’t given some of these guys the thought that they probably need to have and it spurred conversations. I’d be writing a list of responsibilities for a guy and I’d be like, ‘I need to ask him again, what he wants to do or maybe I need to review what my expectations of him are.’”

“We’re developing a partnership with our players. We are going to . . engage our players in conversation, create an atmosphere of legitimate discussion. At the end of the day, what that’s going to ultimately develop for us is way more trust.”

“After being head coach, one thing I’ve realized is that you can watch a ton of film on a concept that you really liked that hurt you in the past. And say, ‘I want to do that.’ But at the end of the day, you have to make sure that those concepts that you’re doing actually fit the personnel who are on your team.”

“And then how you prepare in terms of presenting that [concepts and style of play] to your team, I think is massive.”

“I would always set the practice plan out the night before and left little holes for us to discuss. If you had thoughts, bring them in, have them ready. If you want film, have two or three clips to show. Be prepared with that and then we can dive in and continue moving forward.”

“It’s important that you define your expectations and maintain a level of consistency with players. If you’re going to show them film, you need to figure out how you’re going to do it. If it’s going to be before every game, make sure it’s before every game. If you want to wait two or three games, compile some good stuff and show them then, great. But make sure you’re consistent with it so they know what to expect going into every situation where they’re about to compete.”

“In terms of the things that I’ve shown players [on video] going into a game, it’s more focused on preparing them for the next 48 minutes . . It’s a combination of things. Here are some things from the last game that I think translate to this game . . here’s what your matchup is doing. Here are the things that they’re going to run for him . . ‘Remember, this is a small adjustment from what we normally do, make sure that you’re locked in on that.’”

“In terms of preparing your players to accept information, providing a consistent time, every single day, when they sit down they know, okay, this is when I really need to focus because this is when the information is coming at me is, I think, really important.”

“Having a very healthy relationship with analytics is so important because, at the end of the day, they are a part of our game and they can absolutely help you, if you do it right, if you give it the thought that it needs, and apply it to your philosophy the right way.”

“As a coach, none of us are ever done developing. The game is changing constantly, every day, every year . . [it’s important to] have different perspectives on things, arguing or agreeing, and then stepping out of a room aligned with, ‘I’m not 100% on board with this and they know that, but I’m going to teach this like I’m 1,000% on board with this because that’s what we need to do.”

“The agreement, the disagreement, and then aligning is massive. That was one of the biggest things that my dad made sure to communicate with me as I was a young developing coach, ‘Don’t be afraid to disagree. But then also, don’t be afraid to admit when you’re wrong, and then apply what you just learned to your development.’ If you can do that, with thick skin and really good respect for your peers, it can only make your staff stronger.”

“I’ve always been a big believer that you’ve got to watch film with your staff, because that’s when you really start to blend your instincts . . you get to learn how other people in the room see it . . It helps the younger coaches, as well, because that allows them to see the game kind of through your [the head coach’s] eyes a little bit.”

“Some of the best coaches in the world recognize an issue, and don’t try to smack it out of the way right away, they understand we’re going to slowly communicate and build this thing out of our system as we go over the next seven to 10 days.”

Casey Hill Links from the Podcast: