Friedman also currently serves as the Associate Head Coach of the Haitian Senior Men’s National Team. He received a promotion to assistant coach after spending the last two seasons with the Hornets as a Player Development Coach where he served in a hybrid role with both the Hornets and Greensboro Swarm’s coaching staff. He previously worked for three years as a coach in the G League with the Rio Grande Valley Vipers, Maine Red Claws and Northern Arizona Suns.

Prior to his time in the NBA, he owned an NBA Pre Draft Training company titled “The Preparation” for 5 years before joining The Charlotte Hornets, working with 12 draft picks in those 5 years. 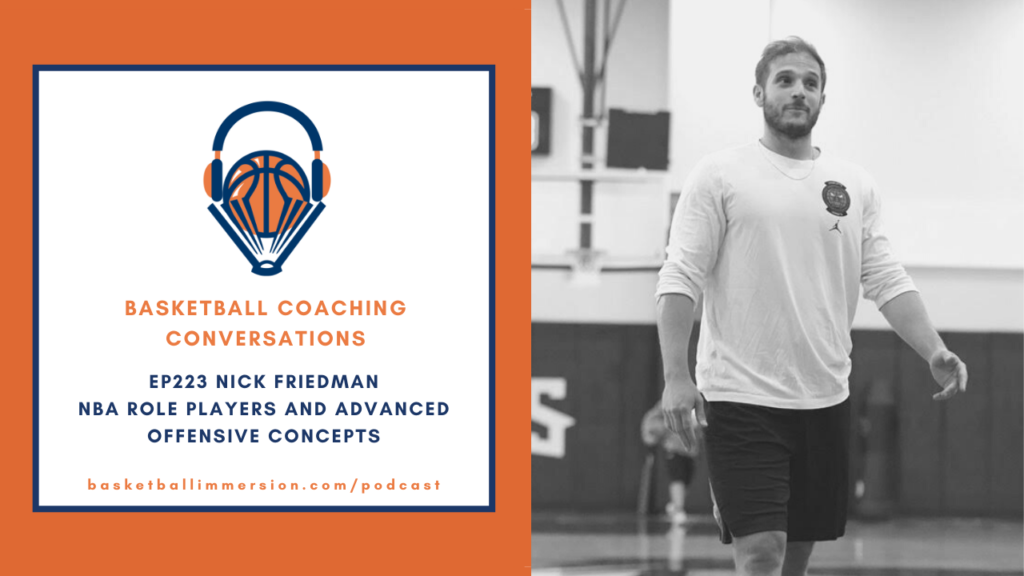 “The majority of these guys that come into the NBA have been alpha males pretty much their entire lives . . but it’s fair to say pretty much 95% of these dudes have to do the sacrificial things very well in order to ultimately develop into creative handlers and playmakers and high volume scorers . . and it’s my job to help them accelerate that learning curve.”

“Accepting the corner running, the spatial awareness, the offensive rebounding, the being into the ball consistently on the defensive end, just doing those things, you buy more trust from your head coach. If you accept that, as not being a threat to your ego, you grow.”

“The ones that make it don’t have a problem with watching others who have succeeded doing the exact same thing. And that’s what I’ve been impressed with the list of guys that I named . . They all have a willingness to learn and watch.”

“I think the common denominator with guys who have gotten paid in those roles is that they win. And in order to win, you have to accept that sacrificial mentality.”

“Are you relentlessly attacking the offensive glass? Are you making your presence felt there? And then does that translate to getting back on the defensive end of transition?”

“A huge goal of mine is to help these guys accept playmaking as a highly valued skill.”

“As coaches, we’re always forcing the idea of selflessness . . but when all of your workouts are based on just your own individual skill of scoring the ball, you’re not working on the mindset of making the right read. So, it’s definitely something that has to be worked on every day.”

“If you want to play organized, high-paced basketball, it’s not going to look pretty every step of the way. You’re going to have to teach it; you’re going to have to accept that flawed aspect, that ugly aspect of it. But when it fully comes together and guys start to own the system, that’s when it’s really beautiful.”

“Personally I like strong-side dunker spacing because it opens more nail attacks and we’re looking to hit the nail and play from there to open up snap drives or slot drives and the opposite wing.”

“[The 5 position] is such a fun position to coach and teach . . when your fives really figure it out and understand that rim running or running and spacing is such a highly valued skill that doesn’t come up in the box score. It’s massively sacrificial and gets paid.”

“Everybody’s personal growth and development revolves around the idea of truth. And if you can’t accept the truth, and you can’t understand that correction is not criticism, you’re going to have a very hard time succeeding at the highest level of basketball or any industry that you’re in.”

“Whenever I’m critical or telling the truth, it’s coming from a place of genuinely just wanting to see you succeed. And if you live your life that way, things become a lot more stress-free.”

Nick Friedman Links from the Podcast: