In this week’s coaching conversation, Washington Wizards assistant coach Joseph Blair joins the Basketball Podcast to share insights on accountability, compassion, and a community based approach.

Joseph Blair has a tremendous basketball résumé, having played for over a decade in Europe and worked as an assistant coach in the NBA, college and G-League. His playing experience saw him play in the NBA, Euroleague and in many other countries and leagues. His coaching experience has led him to three stops with Philadelphia, Minnesota and Washington, and outside of the NBA, coaching in the G-League and in college basketball with Arizona.

Perhaps what distinguishes Blair’s past from other NBA coaches is the unique experience he had during the late 1990s playing for the Harlem Globetrotters.

Joseph Blair was a four-year college player helping guide Arizona to Pac-10 championships in both 1993 and 1994, and was a starter on the team that advanced to the 1994 Final Four. He was taken by the Seattle SuperSonics with the 35th overall pick in the 1996 NBA Draft and enjoyed a 13-year professional career that saw him earn Euroleague regular-season MVP honors in 2003 and second-team All-Euroleague recognition in 2002.

Blair returned to the Arizona Wildcats college program to start his coaching career for the 2013–14 season, serving as an undergraduate assistant coach followed by becoming the school’s graduate manager position in 2014-15.

Joseph Blair is the founder and executive director of the Blair Charity Group, whose mission is to create and support programs that address the priorities of the Southern Arizona Community. 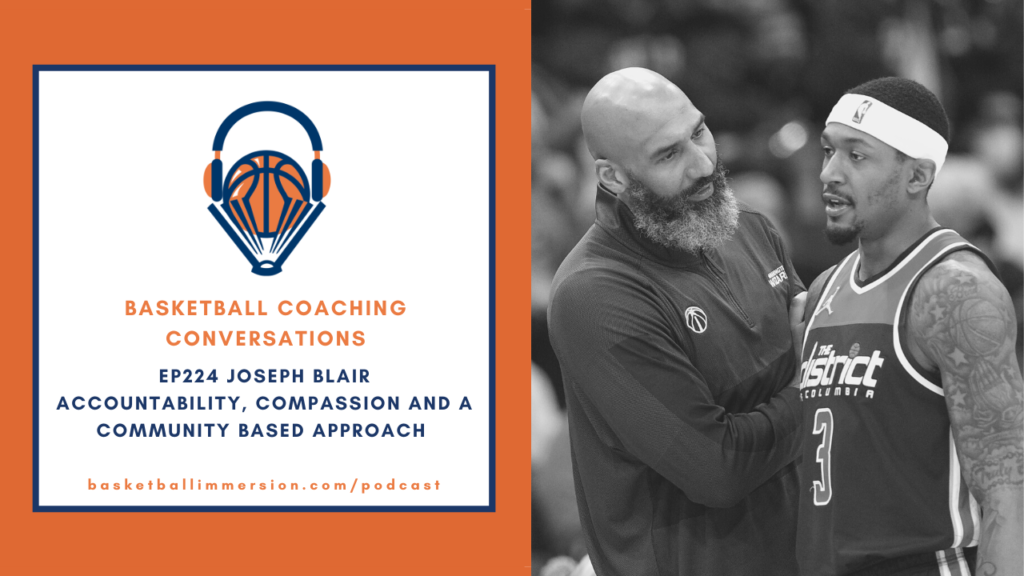 “Everyone’s road is different . . the past and the person you are will dictate the path you take . . So, the best advice I can give anybody is just be your best version of you . . and if you do that, people will pick up on that. I like to believe that’s what I’ve done.”

“Obviously, you’ve got to know your X’s and O’s, you have to be understanding of how the game is evolving constantly. But the way you develop your relationships with your players and the people around you and the love and respect that you show other people is what actually will make you a good coach.”

“The ability to communicate is probably the most important thing in coaching. It’s okay to let players know you’re frustrated. But also, what we tell our players, we want them to play with emotion, but don’t play emotional.”

“The prerequisite to that question [‘How do you handle people who disagree with you?’] is, what relationships did you develop before that happened? . . If you’ve already developed those relationships, and there’s a disagreement, it is just that – it’s a disagreement. It’s not a big problem.”

“I think video is super-critical because a lot of times in the flow of the game, they [the players] may not understand spacing. How important is spacing is . . this guy couldn’t drive because look where you were. Also, that pass was there, they didn’t see it, or that play was there.”

“So, you demonstrate that [your love for your players] by those individual meetings, talking to them, just spending time with them. And being yourself; there’s nothing better than being your most authentic and vulnerable self.”

“This goes back to my business background. The first thing you need to know is what’s your mission? And what’s your vision? Where are you trying to get to? And how do you get there? How do you work everyday to get there? Once everyone knows that, now everyone’s working more efficiently, and now the effort can be pushed even more because you know exactly what direction you’re going.”

Joseph Blair Links from the Podcast: