In this week’s coaching conversation, Tasmania JackJumpers head coach Scott Roth joins the Basketball Podcast to share insights on coaching a new franchise with a lifetime of experience.

In the JackJumpers first year in the NBL, the team outperformed all expectations, finishing fourth in the regular season before defeating Melbourne United in the semi-finals, progressing all the way to the grand final, losing in three games to the Sydney Kings. Roth was also awarded ‘Coach of the Year’ for his efforts in his debut season and won the faith of his team, fanbase, and the league at large.

Scott Roth enjoyed a playing career that saw him play 160 games in the NBA, as well as successful stints across Europe. He played games with the Utah Jazz, San Antonio Spurs and Minnesota Timberwolves. As an NBA coach, he served as an assistant coach for the Dallas Mavericks, Memphis Grizzlies, Golden State Warriors, Toronto Raptors, and Detroit Pistons, before a season each in Europe and the NBA G-League ultimately led to him joining the Perth Wildcats for their 2020 NBL championship campaign.

Roth was also Head Coach of the Dominican Republic, NBA G-League team, the Iowa Wolves, and assistant coach of the Chinese and Turkish national teams. 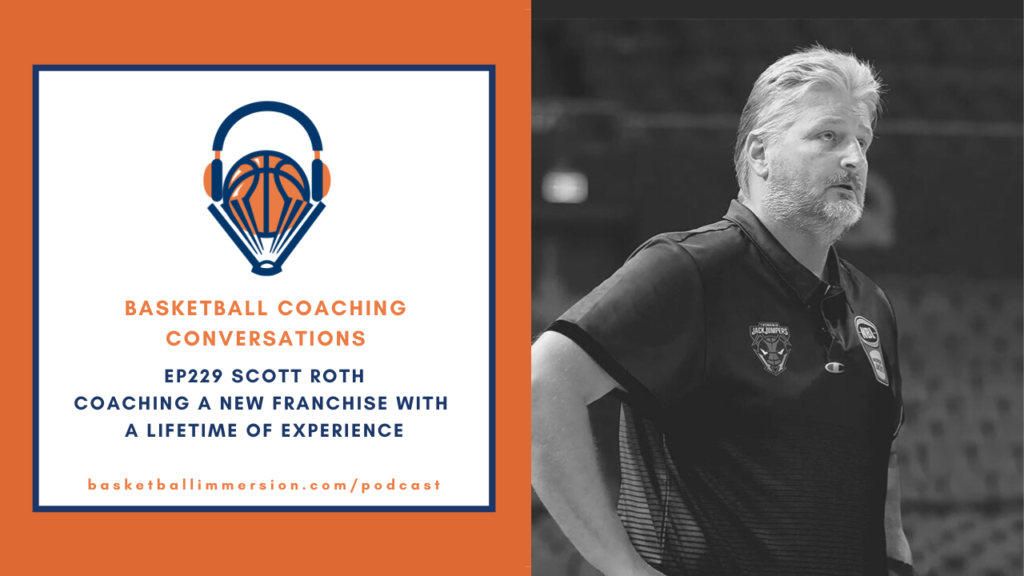 “I created this bloodlines group of former coaches and players, which is something that we’re thriving on and using in our culture. Then, from that point on, I thought it was hugely important that our players . . understood what it meant to be Tasmanian.”

“I did a lot of investigating about players that maybe needed a second chance or had a chip on their shoulder or were an underdog or were ready to take another step. I was very conscious of finding those types of players.”

“That’s all I was looking for – high character, humble, and hungry guys that wanted to do something different and that would go on a journey with me.”

“My number one goal was their connected state . . find a hard playing group of guys, and build a very, very strong culture that would be sustainable long after I’m gone and continue to build that. I thought then the wins would come and the people would enjoy that kind of style.”

“The Players Lounge was something that was in Perth. I saw these guys come in every single day after practice and not run home and spend another 40 minutes together laughing and giggling and talking about whatever. And I think it’s just hugely important and it helped us create this culture.”

“We’re probably much more of a European Coverage team, defensively, in how we do things. We play 11 Guys, we press up the floor . . we get after you. And so I’m hugely influenced by European basketball and the coaches that are there.”

“We really pride ourselves on executing, we saw ‘switch’ and we reacted right to it. We knew what we were doing. And we were able to punish teams.”

“We had great role players . . we had really good guys that knew their jobs and knew exactly what they were supposed to do and they were awesome at executing those jobs. I think that’s hugely important in creating a team from scratch.”

“Every conversation I had, when I put this team together, within the first minute, I said these exact words to all of them, ‘Nothing will be promised to you. The only thing that I will promise you is you will be coached, you will be made uncomfortable. And if you want to go on this journey, this is the place to be, but I’m not promising you anything.’ . . These guys came in knowing that we’re going to play a lot of guys. Some nights you play more; some nights you play less, but it’s all going to depend on the week.”

“Trust that you can make another play. It doesn’t have to be this great shot over the top of somebody and just [waste] a possession just because they switched on us.”

“At the end of the season, we were really good late in the clock because our whole mindset was if we can’t score early, let’s get as late as we can in the clock and really grind these teams down and force them into these kinds of switches. And now let’s take advantage of what we do really well.”

“It doesn’t change for us, our aggression is there every night. And if I can’t find it, I just get to the next guy . . we had to overcome maybe some lack of talent by doing some of these things to create some turnovers, to create some easy baskets in transition and to speed up teams that were trying to run longer sets.”

“We make sure that you know that you’re in for a game and we’ll lay our chips where they are, but you’re going to have to out-execute us and outwork us. And that was kind of what we hung our hat on.”

“As a young coach, you’ve got to find every opportunity to go coach to find who you are, to know your strengths and weaknesses, what you need to work on.”

Scott Roth Links from the Podcast: