Originally from France, Max Lefevre is going into his 4th season with the Minnesota Timberwolves. Max has been a video coordinator and Player Development Coach. His focus is on player development, defense, and game prep strategy.

Before the NBA, Max Lefevre spent 6 years with Chris Beard, from NCAA D2 Angelo State, to NCAA D1 Little Rock and Texas Tech. Max Lefevre helped lead Texas Tech to the 2019 NCAA National Championship final and the Big 12 Conference regular-season championship in his third season as the Director of Player Development for the Red Raiders. Lefevre also worked for Chris Beard’s staffs as Director of Basketball Operations at Little Rock in 2015-16 and as a graduate assistant at Angelo State from 2013-15. Over those three seasons, Lefevre worked for teams that compiled a 77-20 record.

Prior to his time at Angelo State, Max Lefevre worked for MOKAN Basketball located in Kansas City, Missouri. MOKAN is one of the top grassroots basketball organizations in the country. Lefevre coached youth MOKAN elite teams in tournaments across the country and contributed to the creation of a youth coaching developmental program. He also organized events such as the KC Classic, Hardwood Classic, Nike Pre-Draft Camp and various high school team camps. 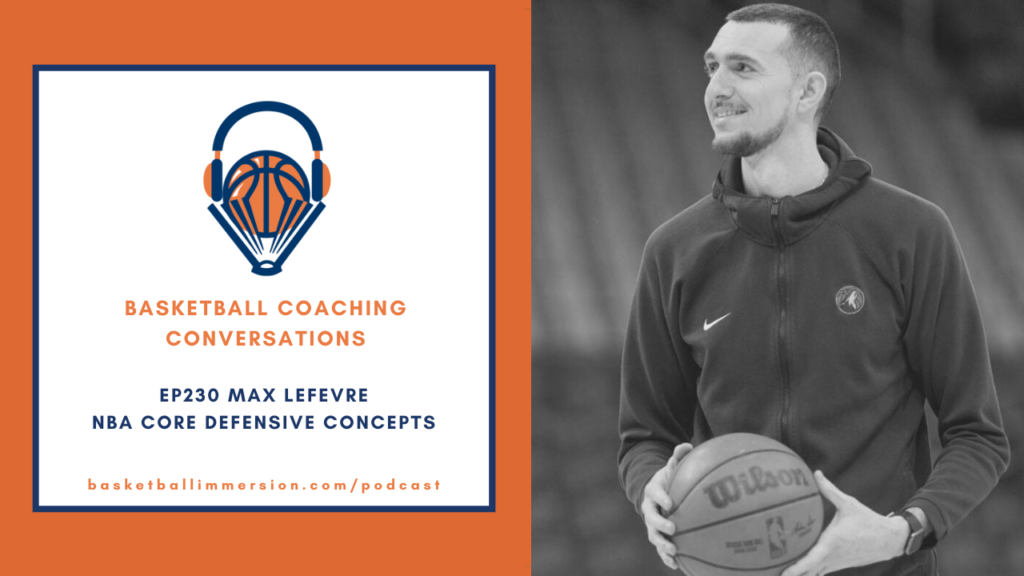 “There’s not really a correlation between how many threes you give up, but the important thing is how good you can contest those threes.”

“If you can get your team to actually sprint back the first three steps . . as soon as the ball leaves the shooter’s hand, you’re going to be in great shape. And then from there, if we get five guys below the ball . . and looking at the basketball and getting in front of it, you should be in good shape [in defensive transition].”

“When the shot goes up, everybody has a job to do . .you should never watch, there’s always something for you to do. If you’re a big, you’re going to be in there banging and boxing out.”

“So, trying to get guys ‘heavy at the nail’ just means really committed to be at the nail and make that driver kick the basketball out. And then ‘high nail’ is, if you look at the near the free throw line and you try to stop that drive there, when the ball is kicked out to the opposite [side], it’s really hard to get back . . you want to be higher just because it’s easier to get back, you can stop the ball earlier, and then get back out quicker to that shooter again.”

“We tell our guys, ‘The earlier you can help the better’ because now it makes it obvious for the next person on what their job is. If you help at the last second, there’s just much less time for that next person to rotate.”

“When it comes to the close out, the biggest thing is just getting him off the three point line and making them drive it again.”

“You can have great rim protection without a shot blocker. There are other ways to protect the rim – by being early, you can take charges which is even more impactful than a blocked shot, or you can just jump vertically, jumping straight up with both hands up and just taking it in the chest.”

“If you look at finishing at all levels and even in the NBA, there are a lot of guys that struggle to finish around contact and length. So, if you can just jump straight up and give them that look where they have to finish around you, it’s just a lot harder to finish.”

“The guard has to take responsibility and ownership in the pick-and-roll. If you can cancel the screen, which basically means not getting screened, . . now the screen doesn’t happen. You don’t have to put two on the basketball, the big doesn’t have to help up and now you’re in great shape. You’ve got a ball handler under pressure and basically everybody’s covered.”

“The first thing is you can’t get refused . . in the pick-and-roll because there’s no help on the other side . . then, you’re basically sending him in a direction but you can’t do that unless you’re into the basketball. You can’t send anybody anywhere, unless you have pressure on him.”

“When the guard comes off and you see a big in a stance with his arms out, that’s what we call ‘presentation.’ It’s basically being in a stance with your arms out. It just looks like somebody that is ready to play defense instead of a big on his heels with his hands by his side and just kind of softly going back.”

“You can play that pick-and-roll 2-on-2 if you’re in a deep drop situation where everybody can stay at home. Then what you have to understand is when guys start pulling up in the mid-range, it’s not the big’s job to contest that, it’s the guard’s read and that’s why rear-view contest is so important.”

Max Lefevre Links from the Podcast: