With five Sweet 16 appearances, 12 NCAA Tournament berths, three Big Ten regular-season championships, a Big Ten Tournament title and an international gold medal on his résumé, Matt Painter is widely regarded as one of the brightest minds in all of college basketball.

Purdue Highlights. The list of highlights at Purdue is impressive.

• Has averaged over 22 wins a season in his 16 years at Purdue. If you don’t include the first transitional year, the average balloons to 23.1 wins per year over the last 15 seasons, and 23.8 wins over the last six seasons.
• Has won at least 25 games in nine of his 17 seasons as a collegiate head coach.
• Painter’s four Big Ten Coach of the Year honors are tied for the third most in league history (Gene Keady – 7; Bobby Knight – 5; Bo Ryan – 4).
• Painter’s 355 overall wins are the eighth most by an individual in Big Ten history. His 180 Big Ten wins are also eighth.
• Painter has averaged 11.3 wins per year in conference play, the fifth-best average in Big Ten Conference history.
• Painter’s 12 NCAA Tournaments in the last 14 tournaments are the eighth most in the country behind Gonzaga, Kansas, Michigan State, Duke, North Carolina, Villanova and Wisconsin.
• Purdue’s three Sweet 16 appearances in the last four years are the third most nationally behind just Michigan and Gonzaga.
• Purdue’s is one of two schools to rank in the KenPom top 25 in each of the last six years (Purdue, Gonzaga).
• Painter’s 380 wins are the fourth-most nationally for an active coach aged 55 or younger.
• Coach Painter’s 13 NCAA Tourmaments are the most for a coach nationally under the age of 55 (As of April 1, 2022 — Painter is 51 years old).
• Purdue has finished in the top four of the Big Ten standings in 11 of the last 15 seasons.
• Lastly, the six-winningest classes in school history have come during the Painter era (2020, 2019, 2018, 2012, 2011, 2010). 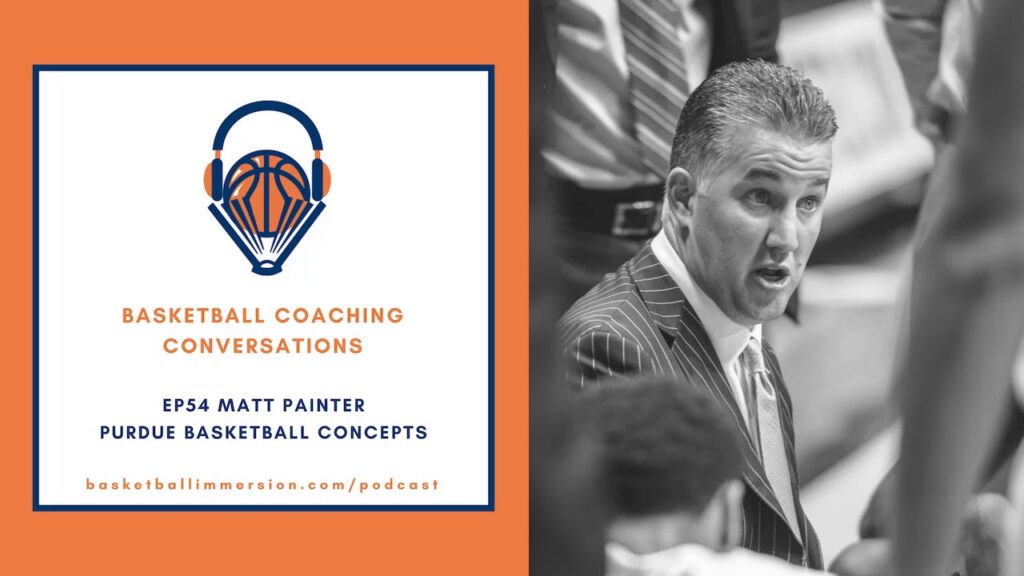 Defensive Transition: Everything You Ever Wanted to Know About

“If you’re more efficient offensively . . you’ve just made yourself a better defensive team.”

“We say come into the keyhole . . you’re really just coming in as a rebounder to the nail. If you can go get the basketball great, but if you can’t – you’ve centered yourself . . now your farthest run is going to be 12 to 15 feet.”

“If we do a two-man or three-man shooting drill and there’s only one ball involved . . normally, you see the guy who passes goes to the end of the line . . that guy needs to get to the keyhole.”

“When you’re one pass away you should box him out . . any circumstance when you’re in help or where you get behind your man . . go get the ball.”

“Getting back on defense is important, but yet it’s never been on a scouting report . . if you’re not going to play defense and rebound and use the athleticsim . . production is so much more important.”

“It’s a weird deal sometimes . . what we like and what helps us win sometimes isn’t looked on favorably by people who watch basketball.”

“Do your job. Everybody has a general opinion about stuff but if you’re not in practice every day, you don’t know what’s being emphasized, what guys need to do.”

“The main thing [for designated safety players] is to get centered . . don’t float back, run back.”

“It’s a good point to emphasize to your players . . why should we gamble when we’re a man down? They think you have to make a play at that point . . that’s the last thing you want . . do you want them to shoot a 15-foot layup or a dunk?”

“Our core of what we do . . we kind of make them into shooting drills and so now their getting . . 25, 30 shots off this one action . . you have to be able to distort the defense.”

“When we make good decisions, our skill comes out.”

“When we get into a groove and . . the actions we think that are going to work are working, we don’t go away from that. We kill the dragon.”

“When it comes to greatness, it’s rarely ever duplicated . . so you try to take what you have right now.”

“When guys want the equal opportunity shot selection and shots and minutes . . it’s like, ‘This comes down to the value of our team and what you can give it with all the pieces . . there’s a lot of dynamics that go with that.”

“You have to be able to relearn things at times.

“Find guys that can make threes, that can make free throws, and can take care of the basketball, and that can run offense . . maybe are limited physically in some areas . . they really help you win games.”