In this week’s basketball coaching conversation, Cal State Fullerton head coach Dedrique Taylor joins the podcast to discuss the slow build reality of most college programs. Taylor has built Cal State Fullerton into a program with national and league significance that has achieved many first in program history. He explains his philosophy on culture, style of play and the brilliance of James Harden, who he helped recruit and coach at Arizona State.

Taylor was an assistant coach for Arizona State University from 2006 to 2013. In 2010, he was promoted to associate head coach named one of the top 25 assistant coaches in the nation by CollegeInsider.com. He helped ASU make four 20-win seasons, including a 25-10 overall record in 2008-2009. In 2012–13, Taylor guided the Sun Devils to a 22-13 record and advanced to the second round of the National Invitational Tournament. Taylor was named the head coach at Cal State Fullerton in April 2013.

Masterclass with TJ Rosene on Building a Championship Culture 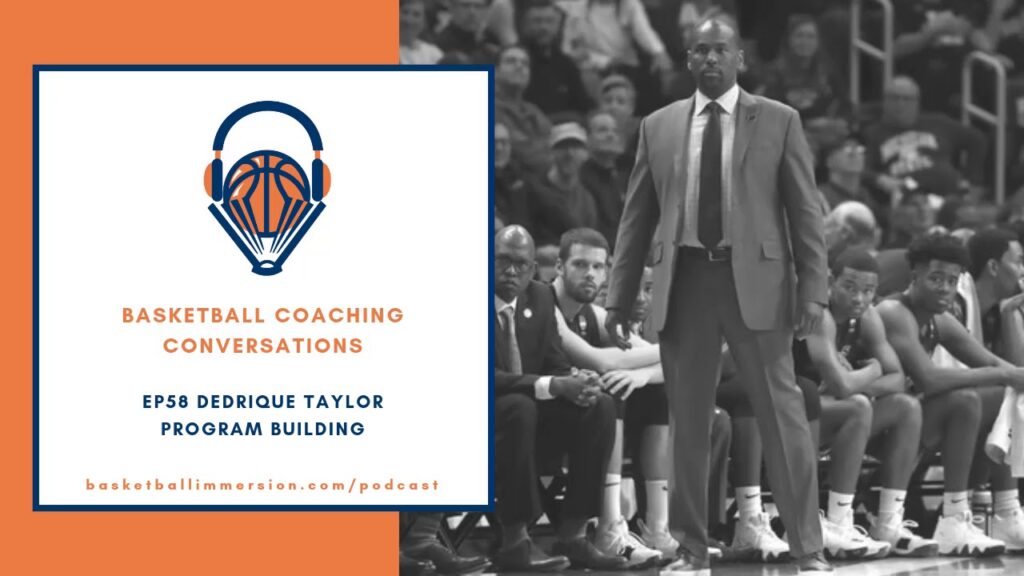 “In the struggle, you learn so much and you are tested so frequently with your beliefs and how you see things and how strongly you believe in things.”

“Those plays that allow you to win or lose . . it just boiled down to the discipline and being able to understand, in this circumstance, I cannot get off track . . and just getting our team . . to understand that and to recognize those moments when they’re happening.”

“Something really significant for me as a younger coach was when I heard . . ‘When the coach becomes more aware of himself, he becomes a better coach.’ . . I’m more aware of what I like, what I think wins and what’s significant to me so I can now promote it . . in our system.”

“Our team and our players began to understand [championship moments] and they began to call those things out before we would in the course of practice or during the game.”

“Being alert and then being aware and coining a phrase to be able to identify those times and then what has to happen during those times is the thing I think that allowed us to move in the direction we’re heading now.”

“Don’t get seduced by the talent. Behind the talent, what else is there? Character. Character meaning can we trust those guys to go to class when we’re not around? Can we trust that they’re going to do things the right way when nobody’s looking . . and hold themselves accountable.”

“Once we determined that they were talented, the shift became, ‘What can we learn about these kids?’”

“Something I stole from Herb Sendak is ‘allowing coaches to coach.’ . . I one hundred percent believe in growth and development and allowing guys to get better . .

“Every day I’m driven by . . who and how can I help someone get better? Because selfishly, if they’re getting better, I’m getting better . . in my quest to get better I want to invest in other people.”

“What do you want to do? What do you think’s best? Is that the best option . . ? How do you know that? How did you come to that? What was your thought process that delivered you to those things? Don’t just come in here and say, ‘This is what I think?’ . . Why did you think that?”

“Most guys don’t want to acknowledge their weaknesses, and I try to explain to them that’s why we’re a team . . we’re a team built on strengths and weaknesses, so what you do well, we need that.”

“We are the people that have changed. We allow these kids to get away with certain things because we say, ‘You’re not like us.’ . . No, you’re not like us but I understand that, I appreciate it, I receive it now here’s what I think we should do because of it.”

“With our style of play, there’s a lot of freedom and sometimes that freedom is a detriment . . if you use it in the right way and you use it consistently, I think that over the course of time you have an opportunity to have success.”

“The system is very defensive driven. I want to play as fast as I can play well. And so we try to get guys to buy into in order to play fast, you’ve got to rebound it.”

“Our system is a small adaptation of what the professional teams do . . those shots are going to come from these spots within the confines of our offense . . “