Bring an atlas along as the amazingly well-travelled Will Voight brings his fascinating resume to The Basketball Podcast, including hoops talk about his current role as the head coach of the national men’s team of Angola.

Voigt’s early days were in rural Cabot, Vermont, shooting hoops on the side of a barn, but he went cross-country to Pomona College in Claremont, California, for college, where he lettered in soccer and earned a political science degree.

He served as an intern for the NBA’s Los Angeles Clippers for the 1998-99, and progressed to video coordinator with the San Antonio Spurs for the two subsequent seasons. The next step was taking an assistant’s role for coach Rick Barnes at the University of Texas at Austin for a season, followed by another year as an assistant, this time for the 2002-03 Metro State Roadrunners in Denver, with coach Mike Dunlap.

Then the journey really began.

From 2002-06, Voigt worked with the Norwegian squad, Ulriken Elite, as a head coach. He got called home, by a fan vote yet, to coach theVermont Frost Heaves to back-to-back ABA Championships, serving there until 2009. Similarly, the fans wanted him so he went to the NBA Development League’s Bakersfield Jam in California, sticking around until 2014.

For 2014-15, Voigt was an assistant coach with the Chinese Basketball Association’s Shanxi Brave Dragons.

Up next came a head coaching gig with the Nigerian men’s team, where the team took the AfroBasket 2015 title, earning an automatic berth in the 2016 Summer Olympics. Another African team, Angola, signed Voigt to a three-year deal to run its national team in November 2017.

“I’ve been fortunate to have had these opportunities,” Voigt told USA Today in 2016. “I didn’t set out with a blueprint of how do I get to China? How do I get to Norway? How do I get to Nigeria? It just presented itself. I certainly wasn’t afraid of going somewhere different. The way it’s played out, I don’t think I could have ever predicted.”

How to Teach the 10 Defense 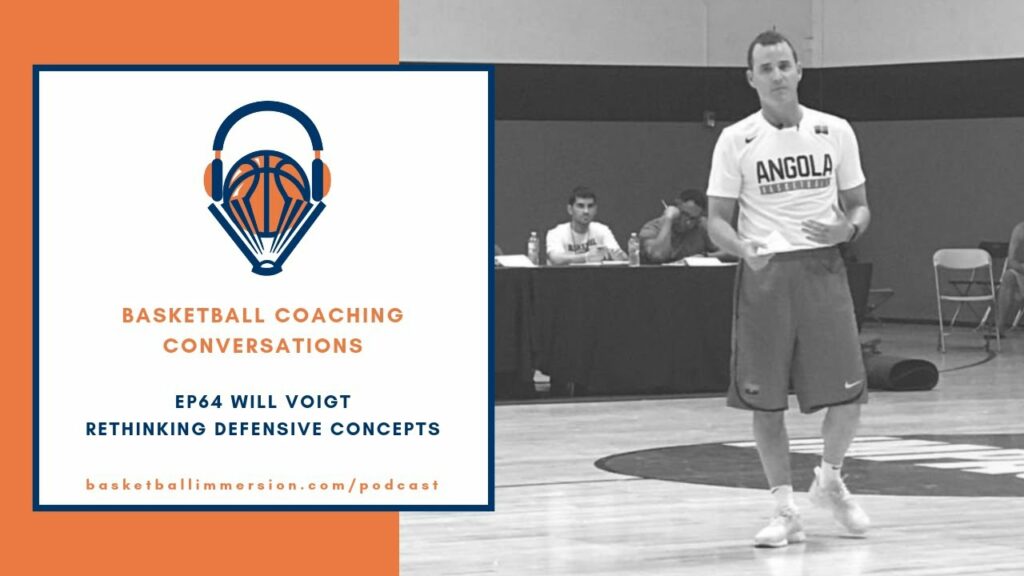 “Whatever your system is, it always needs to start first and foremost on your players. I think you have to take an honest assessment of what you have and figure out how to put those guys in positions to succeed.”

“You can’t be rigid in your approach . . you, obviously, have a foundation . . I do believe that trademarks for a team are important at any level.”

“You have to be able to adjust to the players that you have . . if you have a dominant post player, then you should feature him . . if you’ve got a Jokic who will face . . it’d be silly if they were running a 4-out spread pick and roll when you’ve got this amazing passing-skilled big man.”

“At the end of the day, even the best players have weaknesses . . so we just try to streamline it [scouting the opposition] . . we’re saying we expect you to take him out of his strength . . if his strength is penetration, we don’t want to see him penetrating, period.”

“When you simplify the task for them [the players], it also puts a lot more accountability on them.”

[On 4-man defensive shell drill] “The reality is, if you think . . about any defensive scheme, you want your big to be the rotational help on penetration most of the time. So to remove that from the equation and practice that repeatedly just doesn’t make a whole lot of sense to me.”

“Any defense that you’re in . . you want to keep your defense compact . . we want our players reacting to the ball, always . . having five players moving to the ball helps with whatever your philosophy is.“

“You want to shrink your [defensive] rotations as much as possible . . the best offenses are making you move more and more . . You counter that by trying to figure out how to limit the distance of rotation.”

“Every coach really needs to do that . . do a hard assessment of the teams in your league and how you stack up against them and really think about how you’d beat them and let that be your starting point.”

“Just because everybody’s been doing it one way, doesn’t mean you should be. And it’s that kind of critical thinking is where you can find your competitive edge.”

[On limiting rotations on defense] “We’ve gotten away from the most important thing which is the ability to guard your man . . [referring to] a younger Jason Kidd, we literally could not screen him . . we don’t focus enough on how can the man on the ball can influence your coverage.”

“The shorter your rotations are, the better off you’re going to be . . I think when you start looking at it from that standpoint, you start revisiting ideas that previously people were like, ‘No, way. You can’t do that.’”

“The other thing . . that gets lost a lot is when you start rotating, you’re also putting yourself at huge disadvantages in terms of rebounding . . not only because smalls end up on bigs but also because weakside guys are moving.”

“When I was coaching in the G-League, we put in two set plays to be run off of free throws because our thought was that, if you have the proper spacing, a free throw really is like a transition opportunity.”

Will Voigt Selected Links from the Podcast: