“Training camp is the most important part of the season, in my opinion, because that’s where you get to lay your foundation down.”

“Every day we would . . plan for our blitz package . . we might not have used the blitz for two or three weeks but we always wanted to review it because we knew when we got to the playoffs, we were going to have to use it.”

“These [NBA] players are so talented . . I just think it’s foolish if you think you’re going to do the same thing over the course of a seven game series . . they have to see different looks, you have to be ready to adjust.”

“I don’t think teams play enough one-on-one . . to me that’s how you learn to play and learn how to be physical if you’re a small guarding a big, getting low, having a wide base . . and then if you’re a big guarding a small, maybe you have to give that appropriate cushion to be able to contain the dribble but be able to contest the shot.”

“How are you going to showcase your abilities to stay on the floor? . . If you’re a rookie, you’ve got to know how to play . . and I think the big thing, defensively, is just knowing players and knowing their tendencies.”

“Every team’s different . . but I think everybody’s non-negotiables are: make sure on transition defense we get back . . we want to eliminate easy baskets as much as possible . . the other one, to me, is continuous blown coverages.”

“Your offense has to help your defense, especially when you’re playing against elite players.”

“The actions that have been very difficult to defend, in my opinion, are the pin, DHO action . . and then the Spain pick-and-roll action.”

“We want to take away the paint and take away threes. The best way to do that is to switch because then we have bodies on bodies, [and] we have the ball covered . . the team that gets the better shots is going to win.”

“To me, the best way to defend the short roll is if you have a guard who is physical and determined to get back in front.”

“Every coach from middle school to the NBA, your terminology has to be tight. Everybody’s got to be speaking the same language.”

“On baseline out-of-bounds, before the ball is entered, we’ve got to be bodied up so that the offensive player won’t get separation to go wherever they want; let’s dictate to them which way we’re sending them.”

“My philosophy is, at the end of the day, just keep the ball in front of you as much as possible . . make guys earn their money. These guys are so talented, but don’t give them easy ones . . Don’t let them get a direct line drive by you, don’t fall asleep and get cut back door, don’t bite on a shot fake . . .”

“I think the big thing with practice is, your guys have to be efficient. We don’t have to be there forever. Let’s get good efficient work . . I’d love for it to be more 5-on-5 versus dry run . . but I just feel like the experience of the physicality and it being 5-on-5 is big for me.”

[On closeouts]: “This is the hardest part of the game . . On the flight of the ball, you’ve got to sprint two-thirds of the way, the last third you’ve got to break down and then it’s all personnel driven . . If it’s an elite shooter, you’re running to make them dribble the basketball . . If it’s a total non-shooter, I do want to close out short, but don’t be disrespectful.” 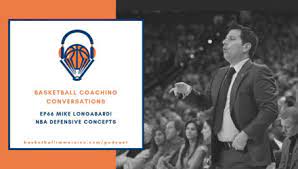