In this week’s basketball coaching conversation, Joe Prunty who has served as both an assistant and head coach in the NBA joins us to discuss the big picture of NBA coaching.

For all the NBA championships (three while with the San Antonio Spurs), all the years coaching elite athletes Dirk Nowitzki, Tim Duncan, and Giannis Antetokounmpo, for Joe Prunty, basketball comes down to one simple goal on the court.

“My background is in trying to get stops,” Prunty told USA Today in 2018 after being named the interim head coach of the Milwaukee Bucks. “If you can get defensive stops, that’s it.”

He studied under Coach Gregg Popovich’s coaching tree, rising to an advance scout and then as an assistant coach for nine seasons. “I tried to learn as much as I could, and that’s where Pop was phenomenal for me and so many of us,” Prunty told the Milwaukee Journal Sentinel in 2016.

For the 2005-06 season, Prunty was off to Dallas for three years, and then Portland, Cleveland, Brooklyn, Milwaukee and, most recently, Phoenix.

How long has he been around? He went from coaching Jason Kidd in Dallas to working under him with the Nets, filling in when Kidd was unavailable, and then moving with Kidd to the Bucks. When asked why he brought in Prunty, Kidd cited his “work ethic” and that he was “well-respected in this league and I thought he’d be a big part of our staff.” When Kidd was fired, Prunty was the interim coach until the end of the season.

It hardly stops with the NBA for Joe Prunty, though. He was the coach of Great Britain’s national men’s team from 2013-17, and has worked at camps around the world, including Turkey, China and Indonesia. 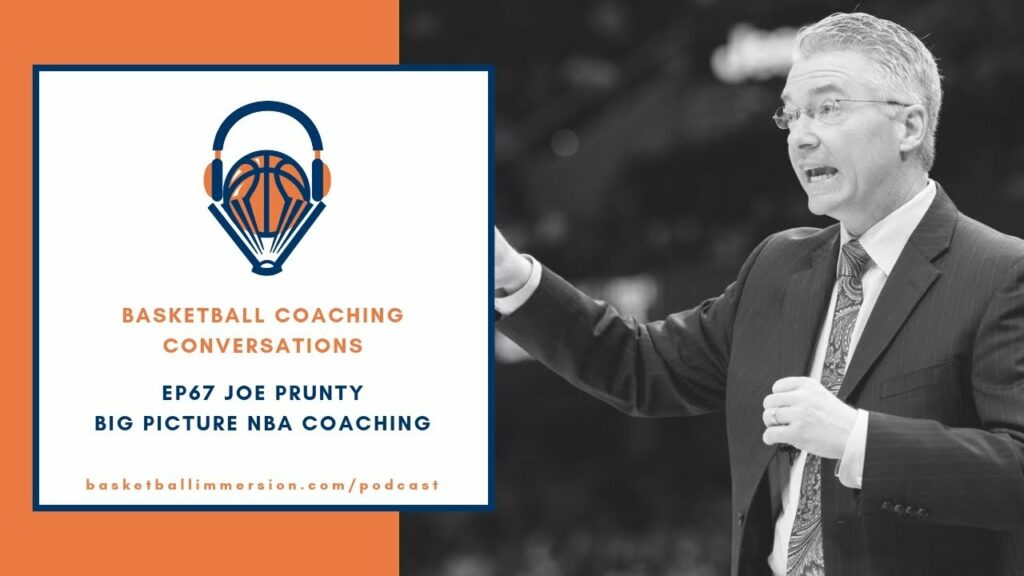 “Chemistry counts, there’s no question about it . . It doesn’t necessarily mean that everybody is best friends and they do everything together . . their ability to coach one another, that’s part of chemistry.”

“You start your meetings and you want to make sure you’re focused on a particular task, that you are collaborative in you efforts, and you’re really trying to generate answers to questions or problems.”

“I think the head coach, the big thing is just creating a culture . . making sure not only do they feel they contribute but also they can defend their point . . sometimes the ‘why’ is the most important thing that needs to be heard.”

“In Europe . . we would have teams that had very few plays but multiple options and they were outstanding at making the reads out of them.”

“Once a play breaks down or a defense gives you some type of an option . . the play after the play becomes different because the read is different.”

“We have specifically taught players about where the read is, which player we wanted to cut, how we wanted to make sure the floor was spaced not only before the cut, but after . . if you don’t get some type of harmony within the spacing and the cutting, then it looks like a jumbled mess.”

“When you look at success of international programs, it’s what they’ve done at the grass roots level . . [that] is so important.”

“As your team evolves . . now you want to give them that freedom . . what I’ve seen a little bit of . . it seems like there’s a tendency for more pick and roll to be played, I’m not sure that’s the best thing to do only because there’s so much more to the game.”

“What it means to be a head coach, it means you’re responsible to and for a lot of people . . the job is really trying to develop people, build habits, teach the game . .”

“Being organized is a huge skill to have . . the important part of it is being able to prioritize what it is you’re trying to do . . it helps you focus not only on short term goals, but on long term goals as well.”

“With all the guys that you would deem as ‘unicorns’ or would say that are unique players or special players . . they went out and worked and put in the effort and energy they need to do to make them [the special players] that they are.”

“The pace at which the game is played clearly . . impacts both ends of the floor. Offense impacts defense and defense clearly impacts offense.”

“When you have guys that can do certain things, you want to put them in the best spots to be successful . . usually, your coordinators are guys that have knowledge in that area.”