In this week’s coaching conversation, Houston Cougars head coach Kelvin Sampson joins the Basketball Podcast to defensive disruption and building a culture of toughness. A veteran of 15 NCAA Tournaments longtime college veteran Sampson led the 2018-19 Houston team to one of the greatest seasons in school history. He guided the Cougars to a 33-4 overall record with a 16-2 mark in American Athletic Conference play, the league’s regular-season title and a berth in the NCAA Tournament Sweet 16 for the first time since 1984.

As a 30-year head coaching veteran at Houston, Indiana, Oklahoma, Washington State and Montana Tech, Sampson has compiled a 616-322 record during his career. He has led his teams to 15 NCAA Tournament appearances, including 11 in 12 years with the Sooners from 1994 to 2006. During his Oklahoma tenure, he guided the Sooners to 10 consecutive 20-win seasons, the 1999 Sweet 16, the 2002 Final Four and an Elite Eight appearance in 2003. He has also been an assistant coach for National Basketball Association (NBA) teams including the Milwaukee Bucks and Houston Rockets.

With the Cougars’ appearance in the 2018 NCAA Tournament, Sampson became only the 14th coach in NCAA history to lead 4+ schools to the NCAA Tournament.
In his career, he has been named a National Coach of the Year three times. Sampson has received six conference Coach of the Year awards from four different leagues and guided every program he has led to multiple 20-win seasons during his stints. 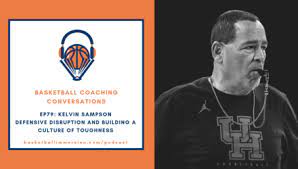 How to Develop Mental Toughness with Constant Challenge in Practice

“One of the things we do most to disrupt the game is how we double the post and the rotations behind it.”

“One of our staff members in station work is always working on 5 people moving on the flight of the ball and our monster defense.”

“Posting guards is something we’re looking at . . things we’re working on are spacing and cutting out of a post double with the guard . . making sure he knows where his targets are.”

“We try to think outside the box a lot. We’re constantly coming up with different ways to guard things . . Our general philosophy is we don’t want the ball to get into the paint.”

“The reason our defense was so good was I had two guys out front . . who could guard the bounce. Your best players couldn’t get by them.”

“Our ability to defend the dribble has been the biggest reason why we’ve been good. The other stuff behind it is all schematic.”

[On defense] “We work on winning the first dribble, we work on taking away the strong hand and we make sure you know whether you are the helper . . the one person who cannot get beat defensively is the helper.”

“Most guys have a low defensive self-esteem and that’s why they foul. As soon as you put the ball on the floor, their natural instinct is to come forward with their hands and as soon as their hands reach, their butt comes up, their feet come together . . now they’re beat.”

“You can always hear a good team. You never hear a bad team. Bad teams don’t talk; they don’t communicate. It’s not important to them.”

“There’s two things I think you should work to get better at every year. One is offensive rebounding and one is getting your team to talk more in transition and continue that through the possession.”

“When I evaluate kids, in every class . . I try to find a captain in that class . . someone who has leadership skills, someone who cares more about winning more than statistics, a guy that will say ‘thank you’ and ‘please’. . “

“Toughness is a relative term . . there’s a big difference . . in playing hard versus competing. We have a standard we set every day in practice. We define to our players what playing hard and competing is.”

“There’s three people who can never have a bad practice: the head coach, your best player and the point guard.”

“Every team has a best player. You identify him and then you hold him accountable.”

“There’s a lot of responsibilities that go along with being a head coach, with being the point guard, and the best player. You’re not like everybody else. You’re different. So your standards are going to be a little bit higher.”

“I don’t ever miss an opportunity to teach talking whether it’s on defense or offense . . you can hear a good team.”

“Head coaches have to have standards for themselves.”

“Spacing and understanding relocation off of spacing . . I think that’s something that can help a lot of college coaches . . just listening to NBA coaches talk about spacing and how to relocate, especially your 5 man. Because if your 5 man doesn’t know how to relocate he’s going to end up in the way a lot.”

“When you run a spacing offense, you can have weakside movement . . but whatever action you do, you still have to wind up in the slot and in the corner. You can’t come to the ball . . it just kills spacing.”