In this week’s coaching conversation, Ryan and Dave Odom join the Basketball Podcast to discuss parents and children in coaching. Ryan and Dave Odom have both coached at the highest level of college basketball. They share insights into a coach’s life from the perspective of a father and son.

In his second year at the helm, Odom and his staff brought the program and the university to a place that even the most ardent Retriever supporter would have thought was impossible. In a six-day span, UMBC won an America East Conference title at prohibitive favorite Vermont and followed up by engineering the first victory for a No. 16 seed over a No. 1 seed in NCAA Men’s Basketball Tournament history. UMBC overwhelmed the tournament’s top overall seed, Virginia, 74-54, in Charlotte, N.C., earning an ESPY nomination for the “Best Moment” of the year. 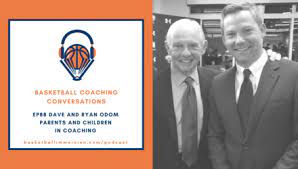 “The key thing . . was using the contacts in the appropriate way but . . ultimately, like any profession, you have to do the work.”

“Seth Greenberg . . worked as a head coach like assistants should work . . he outworked everybody in the office.”

“Larry Davis . . had the ability to get on guys . . but also he had an innate ability to let them know how much he cared about them.”

“I learned a lot just sitting . .in the living room with him after a game just talking about what happened.”

“When I first became a head coach it was all about the offense . . as I’ve gotten older and a little bit more experienced, the balance of the two is . . so extremely important.”

“Great players know when to dribble it, when to pass it and when to shoot it. It sounds very simple but . . they [the players] don’t know it all the time. Your job as a coach is to get them to understand that . .”

“They [my parents] let us chase what we wanted . . the parents can’t want it more than the child . . they allowed me to make my own decision on whether to play or not play.”

“Passion should drive what is happening with that particular child . . Do they love it or not? Are they willing to be tired and wake up at 6:00am on their own and go get shots up?”

“We try to recruit really good people, first and foremost, into our program. So the way I look at it, those guys are like older brothers to my kids . . I want my kids to be around my players and the rest of my staff.”

“In Ryan’s case, I felt all along, that he was confident enough in his own abilities . . to be successful . . I thought . . he would be able to garner something very, very important from each of those coaches [he worked with].”

“I believe in more of a balanced attack, inside-outside.”

[When you have an abundance of talented players] “The biggest problem you’ve got now is figuring out how to play your personnel together. You’ve got so many good guys . . you’ve got to really work at . . how you’re going to integrate your personnel into a total team.”

“I think the . . NBA has decided that they want the stars to be stars . . defensively, you can’t touch them, they’ve got to have free movement . . those kind of things lend themselves to a big, wide-open offensive game.”

“When you set up defensively . . you guard your man and one more . . the one more being if your man does not have the ball, you’ve got to play him for the things that could happen and the things that he could do whether it’s screen, or receive a screen or become a cutter . .”

“Basketball is not a lifetime endeavor for everybody. It has been for me.”